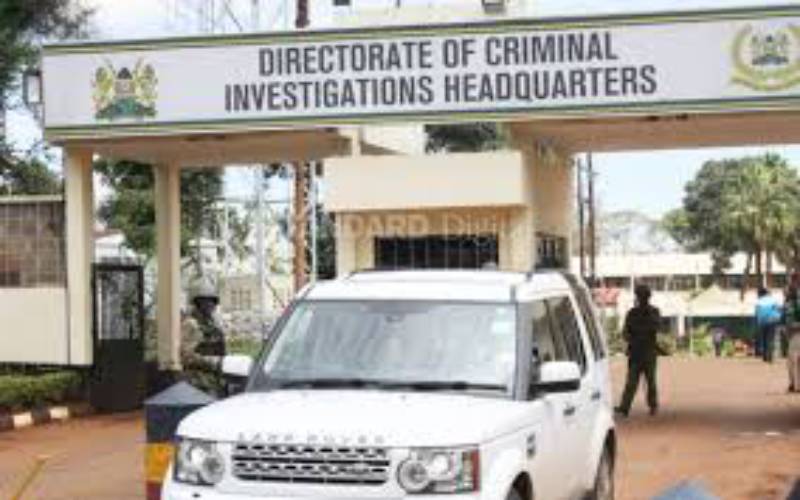 In the wake of the coronavirus, Kenyans have been sharing jokes about this serious matter but things have gone terribly awry for one of them

On Sunday DCI officers arrested Elijah Muthui Kitonyo for what they termed as spreading fake news.

According to the statement by the DCI, the 23-year-old had published misleading and alarming information on coronavirus in Kenya.

Through his twitter account, Kitonyo implied that the government of Kenya was misleading its people about the virus.

Kitonyo, who claimed to be a staff at the Jomo Kenyatta International Airport, said that the woman the government said was the first case of coronavirus and was being quarantined in Mbagathi Hospital, was not in the country at the time the health CS Mutahi Kagwe confirmed the first case of COVID-19 in Kenya.

Elijah Muthui Kitonyo aged 23 years has been arrested in Mwingi for publishing misleading and alarming information on Corona virus.

He will be charged for publishing false information that is calculated or results in panic contrary to section 23 of the Computer Misuse...
/1 pic.twitter.com/qH9PBVoS8n

The DCI has warned the public from publishing or sharing unconfirmed information about the virus that could cause panic and anxiety as it is against the law.

According to the DCI, Kitonyo will be charged with publishing false information that is calculated or results in panic contrary to the law.

If found guilty, Kitonyo could is liable to a fine not exceeding Sh5 million or to imprisonment for a term not exceeding ten years, or to both.

Government spokesperson Col. (Rtd) Cyrus Oguna has warned individuals sharing videos on social media with fake information about the coronavirus and the extent of its spread in the country.

Col. Oguna said the government was working hand in hand with the DCI, and punitive action would be taken against them.

“The fake and alarming videos on #covid19kenya #coronaInkenya have been forwarded to Director of Criminal Investigations (DCI) for investigations, arrest, and prosecution of such individuals,” he said.

His statement come hours after a Kenyan woman took to social media and posted a video claiming to be the woman allegedly quarantined at the Mbagathi Hospital, who strongly denied being infected.

The video went viral with many Kenyans questioning whether the deadly disease was in the country or if she was the patient in the first case of Covid-19 reported in the country.

“The government has taken note of videos doing the rounds on social media with fake information on #coronaInkenya which are aimed at misinforming & causing unnecessary panic to the public,” Oguna further added.

Kenya confirmed its first case of coronavirus on March 14, 2020. Patient Zero had flown from Ohio, USA, via London to Nairobi.

So far three people who had been in contact with her have been confirmed.

By James Wanzala and Renson Mnyamwezi 49 mins ago
Premium Counties owe us Sh3.2b for drugs and equipment, Kemsa boss says

By Biketi Kikechi 19 mins ago
Premium Can return of feared chiefs stop bandits in the North?