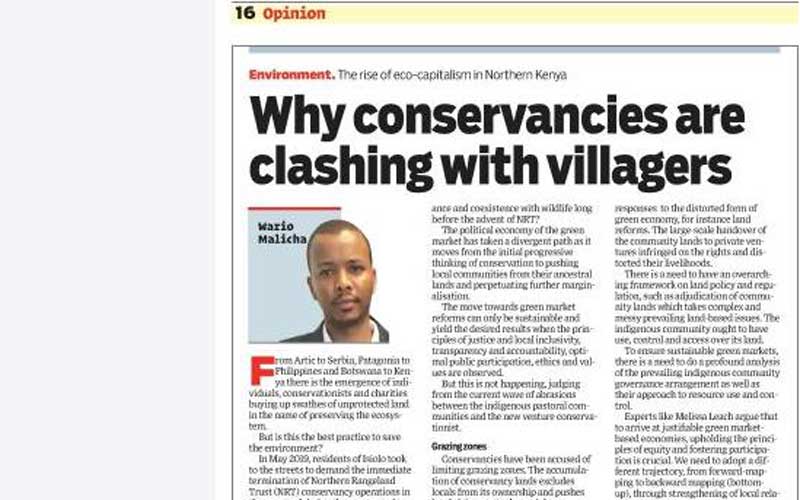 The Northern Rangelands Trust (NRT) would like to exercise its right to reply, on behalf of all its member community conservancies, to the article published on January 9, The Standard titled ‘Why conservancies are clashing with villagers,’ by Mr Wario Malicha. It is unfortunate that the very definition and structure of a community-led conservancy seems to have been misunderstood in the article in question. We seek to correct this misinformation and others.  A community conservancy is a community-owned and managed institution created by indigenous people to support the management of community-owned land (ancestral land) to sustainably conserve and manage the natural resources therein, to improve livelihoods. They are legally registered community institutions, governed by democratically elected boards drawn from the local resident community, and run by indigenous management teams.  NRT was established by local communities to support the growing number of community-led conservancies, some of which were established well before NRT came into being. NRT enters into a formal mutual agreement with respective county governments and the conservancies. In the partnership, the role of NRT is technical. We offer oversight, build linkages and help promote best practices that strengthen indigenous knowledge.

County governments also play an oversight role in this partnership, providing funding and technical advice, and developing supportive legislation and policies. Community conservancies, being autonomous community institutions, focus on the management of their natural resources (including rangelands, forests and marine), governance, equitable benefit sharing, prudent and transparent use of donor funding, peace building and improving the livelihoods of their members.  The article claims critics of NRT say the organisation has ‘caused dispossession’ amongst pastoralist communities, and ‘pushed them out of their ancestral lands.’ Contrary to this - community conservancies are established, owned and run by indigenous, pastoralist communities within their ancestral lands, who manage it for their livelihoods. No community conservancy is fenced, and traditional nomadism takes place as it always has done. As Mr Malicha rightly says, indigenous communities ought to have use, control and access over their land. Indeed, community-led conservancies serve to strengthen land tenure rights for indigenous people, as provided for by the Community Community Land Act 2016.  The article quotes accusations against NRT (and therefore its member community conservancies) of compounding poverty, and leading to conflict. The contrary is true. The community conservancy model has a proven track record for enriching the livelihoods of their indigenous communities. A total of 68,355 people have benefited from conservancy-funded livelihoods projects since 2012. As well as supporting pastoralist activities with access to markets, community-led conservancies have also channeled investments into business development for women and youth, including vocational training and financial services to create wealth and address poverty.  The protests in Isiolo mentioned in the article were concerning specific political actors. Today, land adjudication in Isiolo is addressed by the national and county governments and leaders. NRT and the community conservancies are committed to working closely with county and national governments, and other stakeholders to conserve natural resources and improve livelihoods. NRT welcomes dialogue and constructive criticism, and we invite the writer to visit the community conservancies and get first hand ground truths.  - The writer is Northern Rangelands Trust CEO