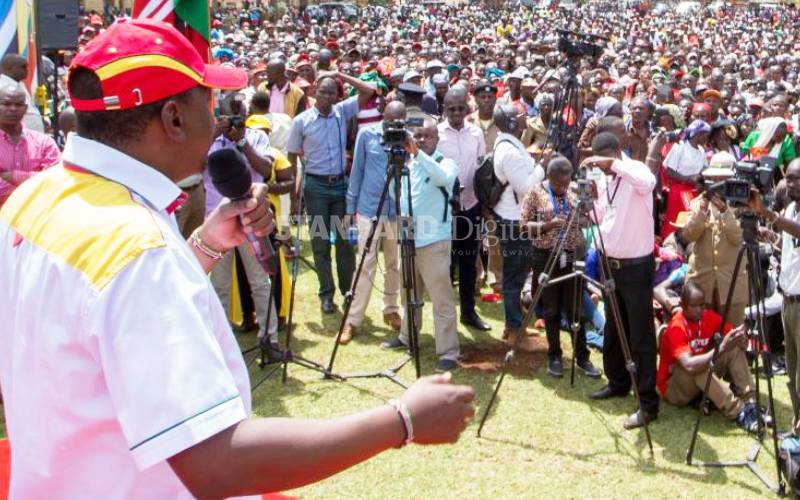 Nuru Moraa, 57, vividly recalls when she got a chance to meet President Uhuru Kenyatta (pictured) during the 2017 campaigns in Ikonge town, Nyamira County. Moraa, who spoke at her Nyairang’a village home, said she was in Ikonge where she sells vegetables. Uhuru had toured the area to seek re-election votes.

The woman, an ardent supporter of the President, said she kept cheering on when speakers drummed up support for him, something she believes caught his eye. When she sought audience to talk to him she was allowed. “When I raised my hand to talk to the President he readily granted me an audience and asked his security personnel who were out to block me to allow me to proceed." The widow, who is also a mother of six, said the President greeted her warmly and she appealed to him to assist her educate her children. She said she struggles to raise them alone since her husband Samson Mose died in 2003.

Moraa said Uhuru promised to help her after the General Election and asked North Mugirango MP Joash Nyamoko to take her to State House after the August 2017 polls. “The President called Nyamoko and told him to ensure I am taken to State House so that he could fulfil his promise of helping me, something that has not happened,” she added. Moraa said she approached Nyamoko after the polls to take her to State House but political situation in the country at the time was unfriendly. She said Nyamoko advised that the President was not in a position to meet people. “My eldest son Abubakar Mose completed secondary school and got a B, but I cannot help him further his education."