Columns
The problems mentioned in the BBI as bedeviling our country are not constitutional problems, and many of them cannot be legislated. 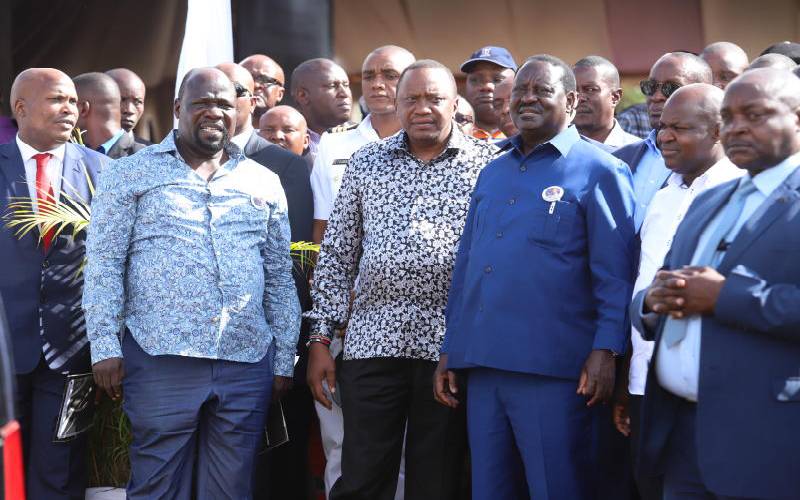 Since the handshake between President Uhuru Kenyatta and Raila Odinga on March 9, 2018, the Building Bridges Initiative (BBI) committee has been going round the country collecting views from the citizens. The emerging trend is that Kenya is geared towards holding a referendum in the near future. The referendum is supposedly meant to amend the Constitution, accommodate and probably perpetuate the political lives of a selected group of politicians. Therefore, this raises the question; is the time ripe for an amendment? In all fairness, this Constitution is just a few years old, and it has some of the best governance structures. The problems mentioned in the BBI as bedeviling our country are not constitutional problems, and many of them cannot be legislated. No amount of amendments will change the situation. The problem we have is that the country lacks virtues associated with great leadership such as honesty, reliability, sound judgement, devotion to public interest and underlying moral compass.

The worst challenge Kenya is facing is politics driven by ethnicity that appears to have shaped how we manage our governance system. Any of the amendments now being spoken about will never change the politics of ethnicity. As it is, the country is likely to drift towards a severe ethnic division if the purpose of the constitutional amendments envisaged in the BBI statement delivered by the two leaders is implemented. A good example is the plan to merge constituencies and counties. These are very sensitive issues. Have suspected The country has been polarized and divided into ethnic enclaves since colonial times. Attempts to merge counties without serious consideration for ethnic sensitivities is a disaster in the making.

Since the handshake, the smaller communities and ethnic and religious minorities have suspected the agreement between Raila and Uhuru is geared towards favouring the major tribes. The merger of counties and constituencies is likely to bring more mistrust and fear that dominant ethnic groups shall marginalise smaller ones. But even on the national scene, the negative impact of the handshake is already being felt. For example, in recent appointments by the President, ethnic minorities are increasingly feeling a sense of exclusion. Out of 18 ambassadors appointed last week, more than half of them were from one region and predominantly from one ethnic group. The spirit of inclusion that was felt after the promulgation of the Constitution is now being reversed. The appointments to major and significant public offices are also being populated by people form certain parts of the country. This has cast doubt on the intentions of the BBI. Therefore, it would not be wrong to assume that even if a referendum leads to a constitutional amendment, the issue of ethnicity would still remain and make the intentions of creating an inclusive government not to be realised. Since independence, Kenya’s political landscape has always been dominated by the major tribes.

Identity Politics Even allocation of resources is mainly shared out to communities that have traditionally dominated the political scene. These large tribes have a sense of entitlement in what Francis Fukuyama refers to as Megalothymia, the desire to be recognised as superior. In his book, ‘Identity: Contemporary Identity Politics and the Struggle for Recognition’, Fukuyama argues that the divide between those in control of power and resources and those that lack such leverage will determine the context of peace in the world. The communities that feel disadvantaged have developed a feeling of Isiothymia, meaning struggle towards being recognised. In Kenya, smaller tribes, particularly those in the Northern parts of Kenya that have grappled with exclusion for decades, have a reason to worry because efforts towards a constitutional amendment do not seem to look at their plight.

The view of those that are Megalothymic is that resources should be reduced for those who have little, like the pastoral communities of Northern Kenya. Just like the biblical paradox in reference to the kingdom of God where Jesus said; “For everyone who has will be given more, and he will have an abundance. But the one who does not have, even what he has will be taken away from him”. The situation in Kenya appears to be going in that direction. The referendum or the handshake do not appear to be in the interest of those in the minority. Mr Guleid is the Executive Director of the Frontier Counties Development Council

Subject must always agree with predicate