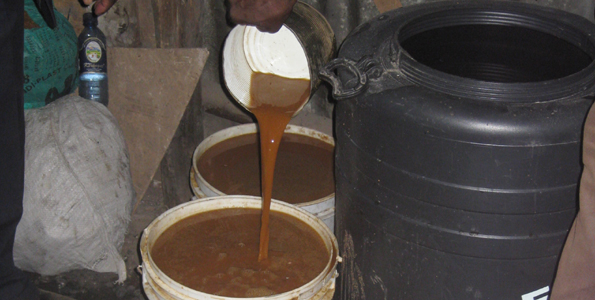 There was drama at the populous Jombo village on the outskirts of Mwatate town when a notorious illicit brew dealer stripped naked to avoid arrest by chiefs. When the woman saw several administrators at her residence on a joint operation to rid the area of illicit brews, she rushed to the toilet and stripped naked to the amazement of all. The undressed middle-aged woman emerged from the toilet forcing the administrators to call for reinforcement of female police officers to deal with the situation.

“We could not have arrested the suspect while naked. We had to call female police officers to arrest her,” said one of the administrators in the raid. During the operation, several suspects were arrested and litres of the illicit liquor locally known as Mbangara and pasha impounded. Sub County Security Committee led by the Deputy Commissioner Damaris Kimondo who is also the chairperson and area Police Commander Monica Kimani confirmed the incident and said the suspect was later forced to put on her clothes and driven to the police station where she would be arraigned in court on Monday. The security committee destroyed 1,500 litres of the illicit brews as Taita-Taveta County is still grappling with widespread sale and consumption of illicit brews and drugs owing to its proximity to the neighbouring country. The security at the same time destroyed 1,000 pieces of livestock hides following orders by a local court.

The consignment originated from Tanzania and was impounded in 2016 along the Mwatate-Taveta highway, which had been described as one of the major conduit points for contraband goods. Ms Kimondo disclosed that this month a total of 21 suspects had been arrested with more than 8,000 litres of the illicit brews. The administrator said the suspects had been fined between Sh30,000 and Sh120,000 by local courts. The deputy commissioner said the fine imposed on the brewers had been deterrent adding that the sentence had forced most of the culprits to relocate to Taveta and Taita Sub Counties for fear of being arrested. “The fines imposed on the dealers and consumers have been deterrent. Scores of the brewers are hiding in the hills after the war against the brews was intensified,” stated Kimondo.

Speaking to The Standard on Sunday, the administrator further said the security committee has devised new ways to deal with the brews menace. She said one of the measures taken is the introduction of joint security operations by Chiefs and community-based raids under the Nyumba Kumi initiative in the Sub County. Under the new approach, the chiefs and their assistants gather in one location and jointly carry out the raids. “We have put the remaining brewers on notice and we are not giving them time to continue selling the brews. We have taken the war against the brews to the Sublocation level. The Joint security operation approach by the chiefs has started bearing fruit,” warned Kimondo. Ms Kimani noted the brews are responsible for the crime, gender-based violence (GBV) and the rising poverty besides badly affecting education and agricultural production in the region.