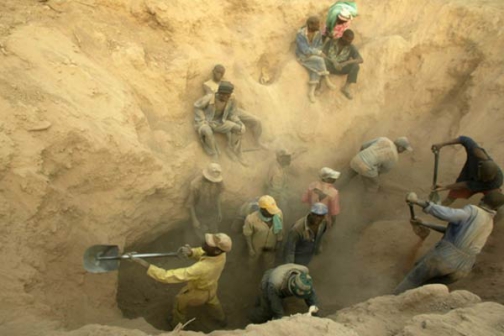 HARARE: Zimbabwean police have recovered the bodies of three illegal diamond miners and are searching for up to seven more missing people, a week after government banned operations at diamond shafts, a spokesman said on Thursday.

The mines minister on Feb. 22 ordered all nine companies operating in Marange, near Mozambique, to stop mining and leave because their licences had expired.

The bodies were retrieved from a shaft in Marange owned by Diamond Mining Company, police spokeswoman Charity Charamba said.

"We have had to call in our sub-aqua unit because the area is waterlogged. We understand there could be up to seven people trapped," Charamba said.

The Marange diamond area, 400 km (240 miles) east of Harare, was the focus of controversy when 20,000 illegal miners invaded in 2008 and were then forcibly removed by soldiers and police.

Human rights groups say up to 200 people were killed during their removal but President Robert Mugabe's government denies the charges.

A High Court on Monday allowed the largest mine in Marange, Mbada Diamonds, to return and assume control of all assets after challenging the government's ban on mining operations.

A full hearing on whether Mbada can resume mining started on Wednesday and will continue on Thursday.