Edward Kimani wa Njuguna was a printer by profession. He lived in Kileleshwa in Nairobi at a friend’s servant quarters, just a few minutes’ drive from the nearby police station. He always felt safe walking to his house after alighting from a matatu which stopped just opposite the police station. But the previous year the security became worse.

After being robbed of his wallet, watch and mobile phone in full view of the station as the sun set, he decided to invest in a second hand car for the sake of his life.

That Monday morning in 2000, Kimani woke up early to go to his printing press in Industrial area. He stretched his hand to switch on the light but there was no power. He then remembered Kenya Power Company had announced a radical “rationing” of power: Kileleshwa and Industrial area would be without electricity that day. So there was no need to hurry. He was going nowhere.

He decided to go to the bathroom to brush his teeth and get a shower. As he turned on the tap at the sink it screamed with a hollow sound: “huuuuu”. No water. He then remembered that of late this had been occurring rather frequently; and when it happened in the morning he would drive along Arboretum Road and stop at the gym at the YMCA near the University of Nairobi to exercise and freshen up.

He picked up his bag and laptop, got into the car and sped off. On reaching the roundabout at the entrance of Arboretum Road, he found a long traffic jam.

University students were demonstrating against the arrest of one of them who had shouted some obscenities at the officials of the Higher Education Loans Board (HELB), accusing them of corruption.

He therefore turned around and decided to drive to Woodley Estate where his sister lived. At least his sister had a tank where she stored water just in case. That, no doubt, was a private solution to a public problem.

The traffic to Woodley was terrible. He had to go through James Gichuru Road and then turn left on Ngong’ Road before turning right again at the roundabout at Adam’s Arcade. In those days there were pot holes everywhere, even on Kenyatta Avenue in the Central Business District.

We used to call them “Nyayo pot holes”. So it took him an hour and a half to get to his sister’s house, by which time it was 10 o’clock in the morning.

His sister was very happy to see him. He had a nice bath, then breakfast followed and by the time they finished it was almost midday.

His sister had a tailoring business at home, so she was not in a hurry to go anywhere. But Kimani had to go to Industrial area to his printing press. He called his head printer and asked him whether “power had come”. “Nothing here boss; we are just stitching the books with our hands,” said the head printer.

Kimani bid his sister farewell and told her he would spend the rest of the day chasing his debtors. He would not call them. He would just appear at their offices since he had nothing to do that day.

Timothy Wambua was a radio announcer with the KBC but he also straddled as the owner of a PR firm on Ngong’ Road near Adam’s Arcade. He had rented a bungalow sitting on a half-acre plot which the owner had recently sold to a developer, a minister in the Moi government.

So when Kimani drove into the compound late that morning, Wambua was meeting with the staff of his company, like It Is, to discuss where they could move which was decent, affordable and easy to reach.

They had found a place in Kileleshwa but the owner wanted a down payment of Sh100,000 and two months’ rent advance of the same amount. So when Kimani pulled Wambua aside to ask about the money like It Is owed him for several publications, Wambua pleaded for more time.

“My brother, please give me one more month, I will pay.” pleaded Wambua.

“So, do I suspend your new order till you pay?” asked Kimani.

“Please don’t; my clients would kill me,” Wambua pleaded further.

“Ok, I will give you one month while I work on your recent orders. But by the way, where exactly are you moving to in Kileleshwa?” asked Kimani.

“Since you stay in Kileleshwa you might just know it. As you go past the police station from Arboretum Road and you take the first turn on the left, you will see an old bungalow with a red tiled roof; the ones which used to belong to the Kenya Railways. The same developer who has bought this house has also bought that one. But he is not developing it; he is renting it. So his agent has agreed to rent me the servants’ quarters for my business. From the description I am convinced it suits my needs.”

From that conversation Kimani realised Wambua had just clinched a deal to move into the house he was staying in. He drove back “home” a forlorn man, living in a world in which nothing seemed to be working any more.

It was about three o’clock in the afternoon when he opened his door and entered, stepping onto a pool of water which suddenly gushed through the door onto the verandah with the force of liberty that only liquids know how to express.

The tap that had screamed with a hollow sound in the morning was now humming a soft “sssssss” as the sink let out the excess baggage with “chabla chabla” onto the floor.

“It is time to move out of this country altogether; perhaps to Rwanda or Australia,” thought Kimani. “But then what do I do with my printing press? I have a bank loan to repay. Well I can sell it. But who will buy it under the present difficult economic circumstances? Forget it. I will sell it to my brother at whatever price. Let him feel the pinch too. How about the land I was buying in Ngong’? And the mortgage I was looking for to buy a flat in Ruaka; one of those Suraya has thrown into the market?”

His mind wandered and wandered, oblivious of the fact that he needed to take off his shoes, throw his laptop on the bed and drain the water from the floor. When he took off his shoes and stepped on the wet floor, he felt some quiver on his toes.

He then lifted them up, sat on a chair and reached out to a loose electricity switch on the wall to put on the light to see better what was on the floor. No sooner had he done that than he was thrown on the wet floor from a shock he had never felt in life.

Within no time Edward Kimani wa Njuguna was no more. Two weeks later Timothy Wambua moved into the empty servants’ quarters. Kimani had been buried at the Lang’ata Cemetery just four days after he died of electric shock, by a few friends, relatives and his employees.

Why IEBC must be reconstituted

By Prof Anyang Nyong'o | 6 years ago 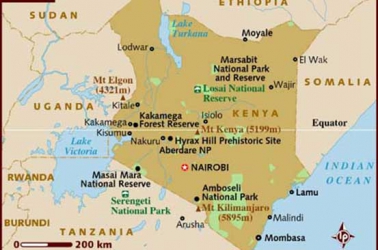 Kenya faces threats of rigging given the composition and history of IEBC
;
Feedback