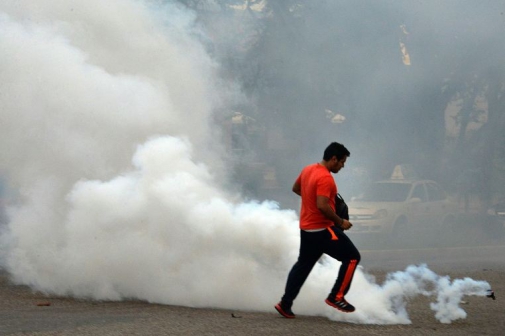 Venezuelan protesters demanded a referendum on ousting President Nicolas Maduro, defying riot police who fired tear gas and a state of emergency that the opposition has blasted as unconstitutional.

But Maduro warned that if anti-government acts turned violent "I will not hesitate" to ratchet up the extraordinary measures in force, "to fight for the peace and security of this country."

The opposition organized the demonstrations in Caracas and two dozen other cities and towns to press for a recall referendum against Maduro this year.

More than 1.8 million signatures calling for the vote have been gathered on a petition that was handed to the National Electoral Council (CNE) two weeks ago.

Venezuela's Guaido reappears after claim he hid in French embassy

Venezuela says it foiled an incursion by 'mercenaries'

Police and soldiers using tear gas and pepper spray blocked around 1,000 demonstrators from marching on the CNE headquarters, journalists including AFP witnessed.

Some of the protesters threw rocks and bottles at the forces barricading them in.

Incidents were reported during demonstrations in five Venezuelan states. Some 30 people were arrested, the opposition and non-governmental organizations said.

The protests were the first since the 60-day state of emergency the unpopular Maduro imposed this week that gives broad powers to security forces to maintain public order.

The order gives broad powers to the government, military and police to ignore constitutional protections and tackle what Maduro has said are threats to domestic and external security, and critical shortages of food and energy.

The only visible effects so have been the diversion of some scarce food for handout to poor citizens, and greater vigilance by security forces.

But Maduro said he had scope to take the state of emergency further, implying that he could impose greater military control over the population to put down challenges to his authority.

The congress, controlled by the opposition, on Tuesday rejected the decree establishing the state of emergency.

But the Supreme Court, which has many judges appointed by Maduro's late predecessor Hugo Chavez, may overrule that, as it has other congressional decisions.

If it is maintained regardless, the opposition has urged the public to defy the state of emergency. It has also asked the army to decide whether it backs the constitution or Maduro.

A senior Vatican official scuttled plans to visit Venezuela next week amid the escalating unrest.

Paul Richard Gallagher, the Vatican's secretary for relations with states within the Holy See, had been expected to visit Venezuela from May 24-29.

He was forced to cancel "for reasons outside the control of the Holy See," said a statement late Wednesday by the diocese in San Cristobal, capital of Venezuela's western Tachira state.

In Wednesday's protest, National Assembly speaker Henry Ramos Allup urged the government to come to a peaceful resolution over the crisis.

"We don't want a bloodbath or a coup d'etat," he said.

But the government is in no mood to reach a compromise.

Vice President Aristobulo Isturiz called the referendum push a "trap" and urged the opposition to instead focus on the next presidential election in December 2019.

"If you win, Maduro will give up power. Easy. What's the problem?" he asked.

Maduro claims the adversity he is facing is manipulated by US interference working with Venezuela's "fascist" right.

By way of evidence, he said a US AWACS surveillance plane twice violated his country's airspace last week. The US Defense Department denied that allegation on Wednesday.

To counter the possibility of foreign "armed intervention" Maduro has ordered military exercises for Saturday.

If the opposition manages to bring about a recall referendum, the vote must constitutionally be held before January 10, 2017 in order to trigger new elections.

Otherwise a successful recall vote would simply transfer power from Maduro to Isturiz.

Maduro's increasing hold on powers and his refusal to countenance a referendum earned a stinging rebuke from the head of the Organization of American States.

OAS Secretary General Luis Almagro said in an open letter that if Maduro impedes the referendum, he would become "just another petty dictator, like so many this Hemisphere has had."

The country's dire condition -- with a shrinking state-led economy, runaway inflation and rampant crime -- has turned much of the population against Maduro. Seventy percent wants to see a new government, polls show.

"The people are going hungry. We are tired of lining up, of killing ourselves for just a carton of eggs or some bread," said Migdalia Lopez, 51, lining up for bread in the town of Guarenas, east of the capital.

Lopez said she used to be a stalwart voter for Chavez and his "socialist revolution," and initially gave her support to Maduro. But not any more.

"Now the people no longer want revolution," she said. "What they want is food."

Residents of Isiolo have threatened to block the construction of Lapsset project which includes a pipeline on their land saying they have not been involved in discussions.