Congo's president shows would-be successor who is in charge 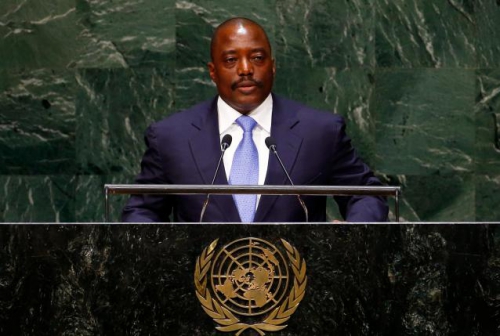 "You won't scare us!" was how the Congolese leadership responded this week to Western threats of sanctions unless President Joseph Kabila ends his 15 years in power by holding an election on schedule in November.

It is a message that has also been delivered, in various ways, to Moise Katumbi, a former close ally of the president now seeking to replace him - a measure of Kabila's apparent determination to stay in power and his mastery of the means to do so.

Hours before Katumbi announced he would run for president, he was accused of hiring U.S. mercenaries for a coup plot. On Friday, police fired tear gas at him and thousands of his supporters outside the prosecutor's office hearing the case in Lubumbashi, the Democratic Republic of Congo's second city.

The standoff in the vast central African country, which has never known a peaceful transfer of power, could become a violent showdown between Kabila, who succeeded his assassinated father, and Katumbi, former governor of Katanga province in the southeast and owner of TP Mazembe, African soccer's Real Madrid.

The government says it is unlikely to be able to organize the presidential poll on time due to budgetary and logistical constraints. The country's highest court ruled a week ago that Kabila would stay in power until elections could be held.

Congo is Africa's largest copper producer and Western mining giants like Glencore and Randgold have invested heavily since a 2003 peace agreement drew a line under years of conflict that sucked in more than a half-dozen neighboring countries.

The United States and Britain said last week they were actively considering sanctioning Kabila's inner circle unless progress was made towards holding elections on time.

In response, Henri Mova Sakani, the Secretary-General of Kabila's party, accused outside forces of trying to split up the country in a bid to restore colonialism.

"You can come up with anything you like - sanctions or whatever. You won't scare us!" he declared in a speech to hundreds of people gathered in yellow-party t-shirts on Tuesday to mark the 1997 overthrow of autocrat Mobutu Sese Seko by Kabila's father.

Leading opposition parties say the court ruling is part of a "constitutional coup d'etat" and have called for nationwide marches on May 26 to demand Kabila step down this year.

But Kabila allies won more than two-thirds of the elections for governors of newly created provinces in March, shoring up local control of security forces and patronage networks.

"Cohesion in the Kabila camp has been maintained these last months," said Hans Hoebeke, International Crisis Group's senior Congo analyst. "At this stage there is little-to-no pressure on him."

Whereas neighboring strongmen Denis Sassou Nguesso in Congo Republic and Paul Kagame in Rwanda have easily pushed through constitutional changes to allow them to stand for third terms, Kabila has been unable to take such a blunt approach.

Millions have died from conflict, hunger and disease since his father Laurent overthrew Mobutu. The country's east remains ravaged by armed groups and in January 2015, dozens died in protests against proposed changes to the election law that could have delayed the poll by years.

Opposition parties have struggled to mobilize supporters for street rallies, but that may change with the multi-millionaire Katumbi, who resigned from running the mineral-rich Katanga in September, accusing Kabila's allies of plotting to keep the president in power."Our future president is Moise Katumbi whether Kabila likes it or not," said Pierre Nyembo Muyeye outside the prosecutor's office in Lubumbashi. Some Katumbi partisans threatened to burn down the entire city if he was arrested.

Known during his governorship for distributing $100 bills to the public, Katumbi has been keen to present himself as the face of the people against a predatory state. "The greatest army in the world is the people," he often says.

"The government fears him because he has the potential to mobilize an electorate in different parts of the country," said Kris Berwouts, an independent Congo analyst. "There is an aura of success around him."

The government denies Katumbi's allegation the coup plot charges against him are politically motivated.

After he was taken to hospital following the tear gas, the hearing against him was suspended indefinitely, but a former U.S. soldier amongst four of his bodyguards arrested at a protest last month is still being held.

When seven parties from the ruling coalition formed an opposition bloc in September, newspapers depicted those left as a sinking ship. Many lawmakers still in the coalition privately say they are dissatisfied with Kabila, but few have broken ranks.

More than half of parliament's 500 members signed the petition last month asking the constitutional court to determine whether Kabila could stay in power beyond this year.

The result has been a stalemate, one that could prolong political uncertainty well beyond this year, said Jason Stearns, director of the Congo Research Group at New York University.

"Delaying tactics will work for a certain amount of time and buy him months, maybe several more years in power," he said. "But it's not a long-term strategy."