Suluhu: Left Tanzania without a face mask, arrived in Kenya wearing one

Tanzania’s President Samia Suluhu arrived in Kenya a few minutes to 10am Tuesday while sporting a face mask in contrast with her departure to Nairobi when she wasn't in one.

The change in faces indicates Suluhu’s spatial awareness, given Kenya has been at the forefront in championing the wearing of face masks to prevent the spread of Covid-19.

In Tanzania, wearing of face masks in public is not mandatory.

As Suluhu emerged from the door of Air Tanzania at the JKIA donning a tawny brown suit, the white mask on her face was conspicuous; it lustrously broke the brown colour monotony. Also sporting face masks, were the president’s aide-de-camp and bodyguards. In Tanzania, Samia’s security officers, just like the Head of State, were maskless.

This is the second out-of-country visit Suluhu is making in less than a month. On April 11, she toured Uganda for a one-day State tour.

Just like her Tuesday visit to Kenya, she also wore a face mask to Uganda on April 11 despite leaving Tanzania without one. Suluhu was received at the JKIA by Cabinet Secretaries Raychelle Omamo (Foreign Affairs) and Amina Mohamd (Sports).

In East Africa, Kenya has registered the highest number of Covid-19 infections, with 161,000 cases reported since the disease broke out in March 2020.

Tanzania, which stopped communicating Covid-related data in April 2020, has only 509 cases officially recorded.

Experts say part of the reason Kenya has more cases registered, is that it has been forthcoming with Covid-19 information, particularly data on new and closed cases.

Tanzania took a different coronavirus-handling route from Kenya in April 2020, resulting in a diplomatic spat between the two countries.

Late Tanzania’s President John Magufuli came across as faulting Kenya for treating Covid-19 “too seriously”, yet, according to him, it was a disease that could be treated through prayers and herbs. 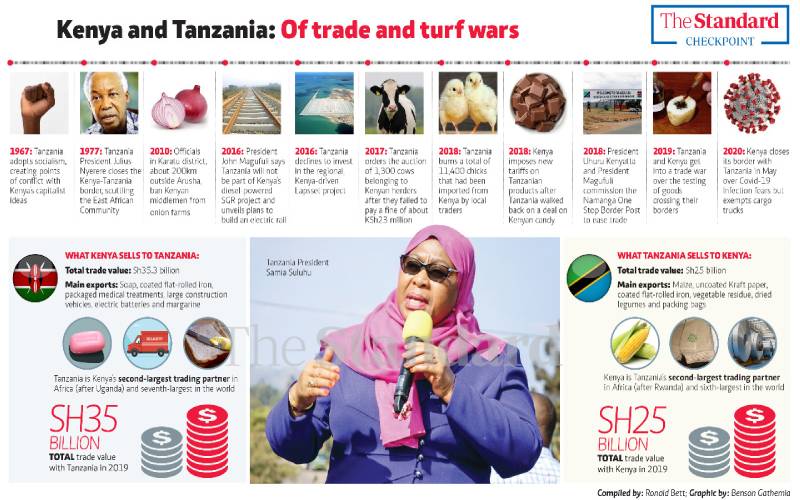 The clash in principle led to border disagreements when truck drivers from Tanzania were forced to produce certificates indicating they were Covid-19 negative.

Tanzania retaliated by banning Kenyan truck drivers and traders from accessing the country.

The row, which threatened regional integration, saw Magufuli and his Kenyan counterpart, Uhuru Kenyatta, resolve to end the disharmony.

Magufuli said Tanzania had sent representatives to sit down with their Kenyan equals and end the dispute.

Despite Magufuli’s assurances, the relationship between the two nations remained frosty.

On April 10, Sports Cabinet Secretary Amina Mohamed, on behalf of President Kenyatta, went to Tanzania, to extend an olive branch, and invite the host to Kenya.

It remains to be seen whether Suluhu’s two-day State visit to Kenya would bring the much-needed reconciliation.

Also of interest, is whether Suluhu will change tack on how she handles the coronavirus crisis back at home.

Unlike her predecessor, she promised to take a different approach in managing the contagion.