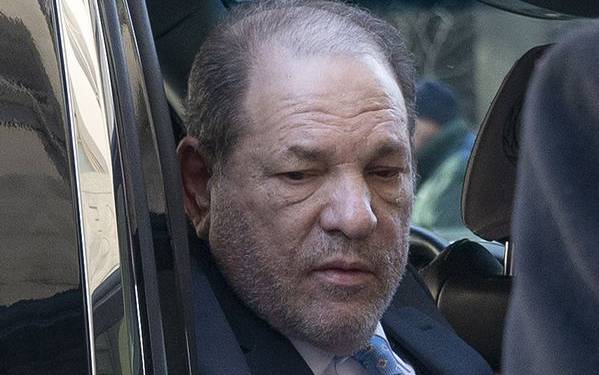 American movie producer Harvey Weinstein (pictured) has been jailed for 23 years after being found guilty of rape and sexual assault.

The shamed movie mogul, 67, was told he could face up to 29 years behind bars, however, his lawyers had appealed for a much shorter sentence.

The sentencing comes weeks after he was found guilty in the landmark trial, which was hailed as a victory for the #MeToo movement in Hollywood.

After his sentence was handed down, the six women who testified against him and the prosecutors walked victoriously out of the courtroom.

The women cried and held each other as they walked out of the building to applause and screams of "Justice" from people in the halls.

Weinstein had arrived at court today in a wheelchair and said he had "deep remorse" as he addressed the courtroom.

Variety reports he said: "I am totally confused. I think men are confused about all of this…this feeling of thousands of men and women who are losing due process, I’m worried about this country.

"This is not the right atmosphere in the United States of America."

He also said he had "serious friendships" with the two accusers he has been found guilty of assaulting.

Prosecutors urged the judge to impose a decades-long sentence.

The former movie producer had been awaiting sentencing at the notorious Rikers Island jail, in New York, after finally making it there days after he was meant to.

He spent most of his time since his sentencing in hospital, after taking ill at his trial.

Weinstein's lawyers had asked Judge James Burke to consider their client's poor health, his age, and the fact that he's a father to young children when handing down his sentence.

They asked for the shortest possible punishment for their client, a jail term of just five years.

The lawyers backed up their argument by citing Weinstein's "accomplishments" and "charitable endeavours" over the years.

Weinstein has consistently denied any wrongdoing and lawyers say they will appeal his convictions.

He was found guilty of two offences last month at a trial that lasted weeks in Manhattan.

A jury found him guilty of a first-degree criminal sexual act for forcing oral sex on former production assistant Miriam Haley, who is also known as Mimi Haleyi, in 2006.

Weinstein was also convicted of the third-degree rape of Jessica Mann, a former aspiring actress, in 2013.

He was acquitted by the jury on the more series first-degree rape charge of Ms Mann.

Jurors also cleared him of a further two counts.

Speaking at Weinstein's sentencing, Ms Haley said: "It scarred me deeply, mentally and emotionally. What he did not only stripped me of my dignity as a human being and a woman, but it crushed my confidence."

Ms Mann added: "I don’t know how to explain the horrors of being raped by someone who has power. The impact on the psyche is profound. Rape is not just one moment…it is forever."

Weinstein had been accused of faking his illness to avoid being moved to Rikers Island ahead of his sentencing.

He was rushed to the hospital following his guilty verdict after complaining about chest pains. He was pictured leaving the New York courtroom in an ambulance.

It was said to be a "precautionary measure".

He was taken from the courthouse to Bellevue Hospital, where he had remained until March 8.

After he was convicted, Weinstein wailed: "I'm innocent. How can this happen in America?"

Texas teenager had shot grandmother before killing 21 in one classroom

By Wambua Sammy | 19 hours ago