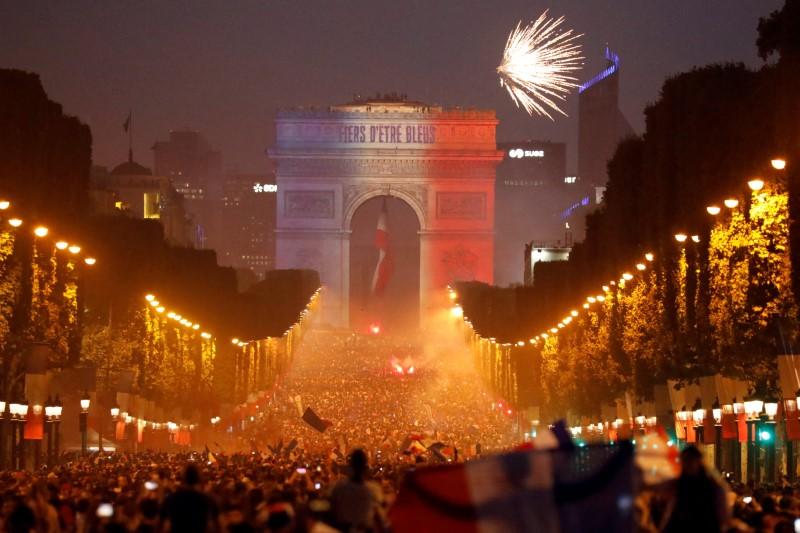 The World Cup-winning French team returned home to a heroes' welcome on Monday as hundreds of thousands packed the Champs Elysees for their victory parade ahead of a presidential reception in the evening.

France overcame a determined Croatia team to win 4-2 in Sunday's final, with teenager Kylian Mbappe applying the coup de grace and cementing his place as a new global superstar at the age of just 19.

Millions of fans in France celebrated into the night, honking car horns and flying the tricolour flag while the Eiffel Tower and the Arc de Triomphe were lit up in the national colours of blue, white and red.

Crowds began converging early Monday on the Champs Elysees, the gathering point for all national celebrations, for a parade by the team atop an electric bus expected to start in the early evening.

"We're so proud of this team, they have truly become our players," said Priscilla Lagneaux, 28, who was waiting with friends under a wilting sun on the avenue. "We had to see them, and also the Cup."

The players arrived to a raucous welcome at Charles De Gaulle airport northeast of Paris, including a "water salute" by the fire brigade which sprayed arcs of water over the Air France jet as it taxied to the gate.

Captain Hugo Lloris, flanked by coach Didier Deschamps, was the first to emerge from the aircraft, raising the famed golden trophy before heading down the stairs and onto a freshly laid red carpet. 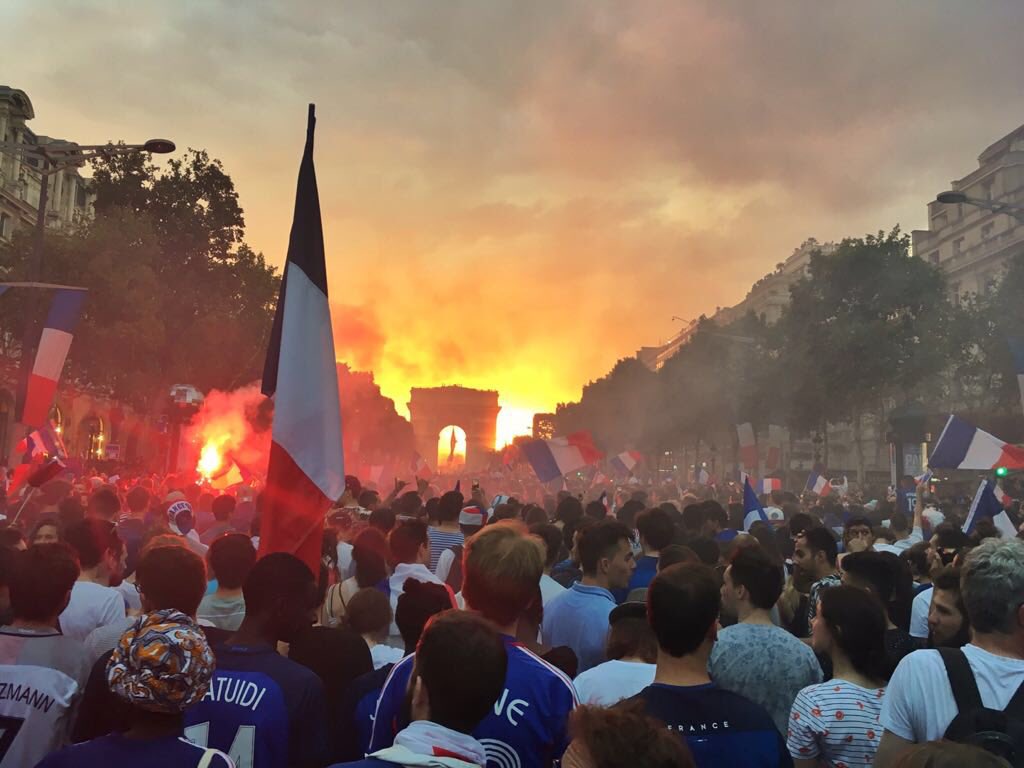 Commentators have focused on the outpouring of patriotism and sense of national unity created by the multiethnic French team, many of whose stars including Mbappe and Paul Pogba hail from deprived and often overlooked suburbs of Paris.

Laurent Joffrin, editor of the leftwing Liberation newspaper, said they had lived up to the ideal of "the republic that we love: united and diverse, patriotic and open, national without being nationalist".

After the parade France's newest idols will be welcomed at the Elysee Palace by Emmanuel Macron, whose office has already promised the Legion of Honour for the victors' "exceptional services" to the country.

In Paris, the metro system temporarily renamed six of its stations in honour of the key players, with the Victor Hugo stop -- named after the famed 19th-century writer -- becoming Victor Hugo Lloris after the team's goalkeeper.

Two stations were rebaptised in tribute to Deschamps, who captained the national side to its first World Cup victory, won on home soil in 1998.

Alongside Mario Zagallo and Franz Beckenbauer, he has become only the third man to win the World Cup both as a player and coach.

Deschamps, who was soaked in champagne by his overjoyed players at a chaotic press conference Sunday, said afterwards that the win was "just as big and just as beautiful" as his 1998 triumph. 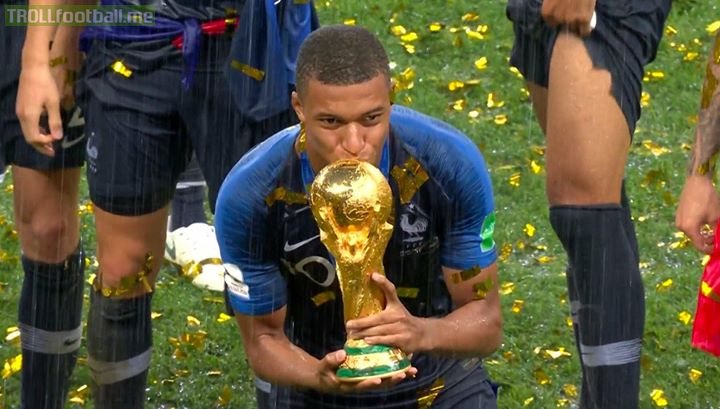 "There are two things that matter -- one is that these 23 players are now together for life, whatever happens, and also that from now on they will not be the same again, because they are world champions," he said.

Around 1,000 youths from local soccer clubs across the country, including the gritty Bondy suburb which produced Mbappe, are expected as guests at the reception at the Elysee presidential palace.

"We're going to say thank you!" said Sacha, one of the young players already at the palace. "I don't regret not going on vacation this summer."

The team will have a private meeting with Macron and his wife Brigitte, and then they will enter the palace's gardens where Macron is expected to make a speech. Afterwards guests will be treated to the beats of DJ Snake, who has worked with pop stars including Lady Gaga and is part of the Pardon My French collective of French DJs.

Macron had already celebrated with the team on Sunday -- even doing "dab" dance moves with players in a video that has gone viral -- after attending the final in Moscow.

Some analysts believe the 40-year-old centrist will benefit from the feelgood factor sweeping France, with Macron able to show a common touch after months of criticism from his opponents that he is distant and elitist. Later the team will attend a dinner in their honour at the posh Hotel du Crillon. 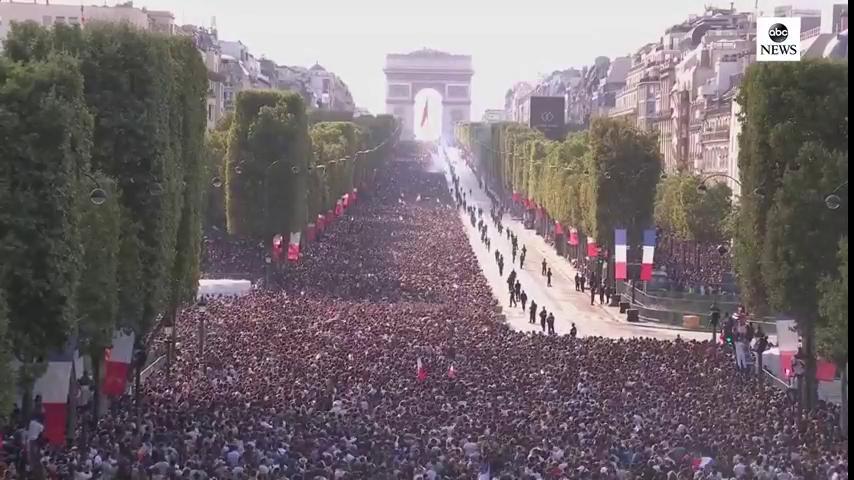 - 'Extraordinary soccer' - Macron will be relieved that an evening of joyous and occasionally chaotic celebrations across France passed off without any major incident following a string of terror attacks in France since 2015 that have claimed nearly 250 lives.

There were 292 people arrested nationwide and isolated clashes between police and rowdy crowds in Paris, Lyon and Marseille.

Several French supporters were involved in fatal accidents, including a man who threw himself into a shallow canal in the city of Annecy. For Croatia, a country of just four million people, the loss was bitter but their fans took solace in the best run in the nation's history, which featured a stunning win against Argentina and a semi-final victory against England.

"Thank you, heroes! - You gave us everything!" read the Sportske Novosti front page. "'Vatreni' (the "Fiery Ones" in Croatian), you are the biggest, you are our pride, your names will remain written in gold forever!" the newspaper said.

The award was broken down into Sh2 million for medical expenses, with the magistrate noting that the boy...