By Brian Kisanji | 7mos ago 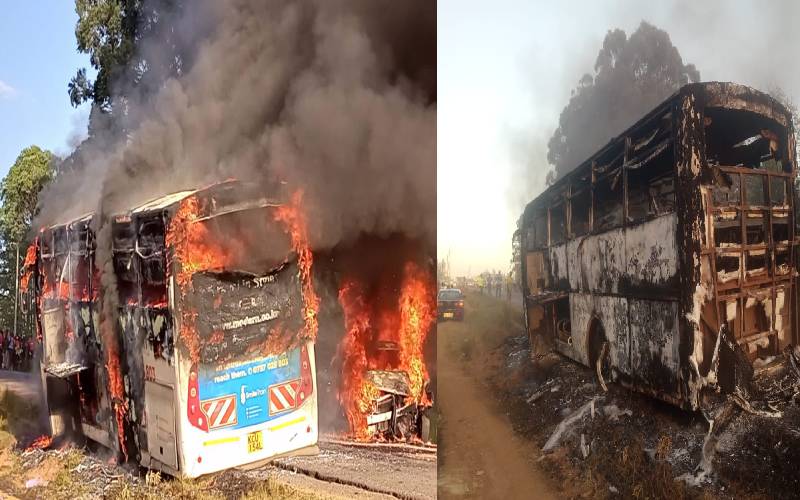 Tens of passengers heading to Mombasa from Western on Monday escaped death by a whisker after the bus they were traveling in was involved in an accident before catching fire.

Those who witnessed told The Standard that the accident happened when a salon car heading to Chavakali collided with an oncoming car as the driver tried to evade a pothole on the road.

The Modern Coast bus that was headed to Mombasa from Kakamega was caught in the accident as it tried to evade hitting the two vehicles.

"The bus was not involved in the accident but as it tried to get out of the road one of the tires caught fire," said Kevin Kidake a resident of Bendera.

Witnesses accounts showed that the instant breaks applied by the bus driver who also hit a pothole was also a reason the bus caught fire.

An alert raised by the bus driver helped all the passengers to alight safely before the bus got completely engulfed in flames.

The bus caught fire before it spread on one of the salon car.

No passenger on board the bus was injured.

The drivers of the two salon cars had no physical injuries too.

Confirming the accident Kisatiru assistant chief Clarence Imbamba said the accident should be blamed on the bad state of the road.

The Chavakali-Kapsabet road is narrow with a lot of potholes.

"The vehicles were evading the many potholes that are on the Kapsabet road and that was the main cause of this accident," said Imbamba.

By Brian Kisanji, Juliet Omelo, Jackline Inyanji 5 hrs ago
Premium Where top Western leaders are expected to vote on August 9