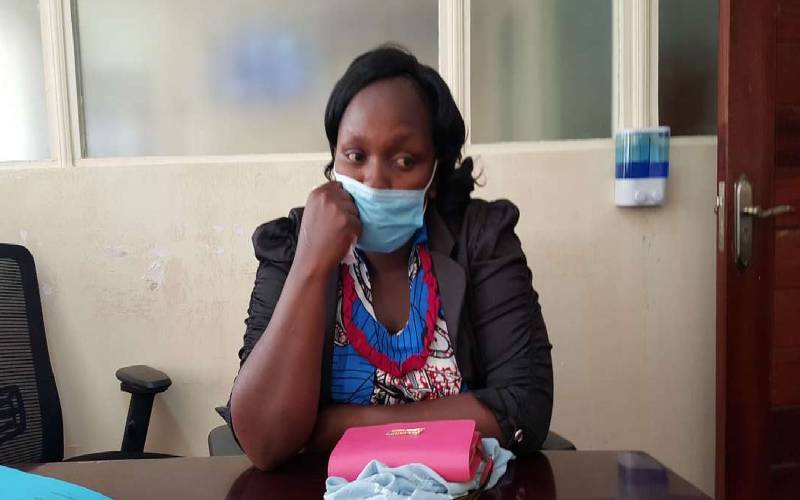 Agnes Wangui, the woman who temporarily blocked the burial of Matungu MP Justus Murunga on Saturday was missing from the burial despite court directing the family to allow her to take part.

Wangui (pictured) and her two children were neither spotted at the MP’s rural home in Savala village or at Makunda Primary School where the funeral service of the late MP was held.

Murunga had two wives with the first one having a home at Savala while the second wife’s home is at Makunda.

By the time the article was published at 1;30 pm, Wangui had not arrived at the funeral.

“We are yet to see her, we don’t know whether she is coming or not,” a source at the burial told Standard Digital.

Wangui who claimed to be the MP’s mistress went to court and blocked the burial pending the conclusion of a DNA test to confirm the paternity of her two children.

Wangui filed the case at the Milimani arguing two widows Christabel and Grace Murunga might lock her and her two children out of the funeral arrangement and the actual burial.

The order was lifted by presiding Magistrate Agnes Makau following an application by Murunga’s widow Christabel, arguing she was not aware of the existence of Wangui.

The court, however, directed that Wangui be allowed to attend the funeral with her children.

Wangui in her affidavit swore that she met Murunga in 2012 when he was a supervisor at Embakasi Ranching while she was a businesswoman selling beverages and snacks within Ruai area.

“Shortly after, we began a romantic relationship and out of the union we were blessed with two children. The first child was born in March 2013 while our second was born in November 2017,” swore Wangui.

She stated that since Murunga had informed her that he lived with his wife in Utawala Estate, he rented for her a house in Ruai where they stayed with her children.

The funeral service of the MP is underway with various political leaders in attendance.

The MP’s remains will be buried in accordance with Ministry of Health Covid-19 regulations that include the pallbearer wearing Personal Protective Equipment (PPEs).

Murunga, commonly referred to as the 'drill' was born in 1960 and was a manager at Embakasi Ranging Company in Nairobi before getting into politics