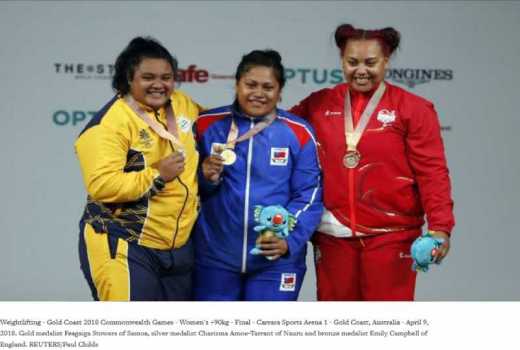 Transgender weightlifter Laurel Hubbard withdrew injured during the Commonwealth Games tournament on Monday as an overwhelmed Feagaiga Stowers of Samoa claimed gold in the 90+kg division.

The New Zealander, whose participation was criticized as “unfair” by the Samoan team, lifted 120kg in the snatch but injured her arm on a failed third attempt after raising the weight dramatically to 132kg.

Although having taken a 7kg lead over teenager Stowers into the clean and jerk, Hubbard took no further part.

Stowers, whose coach had slammed Hubbard’s entry as an “unfair advantage” in the lead-up, claimed gold with a combined total of 253kg, ahead of Nauruan Charisma Amoe-Tarrant (243) and England’s Emily Campbell (242).

An emotional Stowers declined to speak directly to reporters but a Samoa team official said the lifter felt “shocked and so happy” that Hubbard had withdrawn.

“She felt it unfair for her to compete (with Hubbard). I hope everyone noticed,” the official told reporters next to 17-year-old Stowers.

“She never thought that she is going to come and win the gold medal. All we were aiming for was silver or the bronze medal.

“It’s unfair to (Stowers) as a woman... We know we can’t beat (Hubbard)... but we wanted her to do a good result and get a good ranking.”

When she competed, Hubbard was warmly received by a packed crowd at the Carrara Sports and Leisure Centre.

The 40-year-old New Zealander, who lived as Gavin Hubbard until four years ago and competed at national level as a man, finished second in the women’s super-heavyweights behind American Sarah Robles at the world championships in December.

“It seems likely that I have ruptured a ligament,” she told reporters.

“Until we have further scanning, we won’t know the details.

“I have no regrets about the attempts I made, because I believe that to be true to sport you really have to try to be the best that you can, and I’m happy with the decisions that were made.”

Some commissioners are reported to be opposed to the move.