Kenya Commercial Bank (KCB) has crafted a new model aimed at helping the institution survive the growing competition for deposits.

The bank’s latest change in strategy involves a radical shift in target market by focusing on a more vibrant, dynamic and ambitious youth population, which constitutes an approximated 56 per cent of Kenyans.

The move is part of the bank’s growth and expansion policy aimed at consolidating the deposit base and growing its bottom-line to double digits through diversification and extension of the niche market.

The bank, the country’s largest by branch network and asset base had previously initiated a Sh30 million campaign with a view of luring the burgeoning youth populace, which remains untapped by other commercial banks.

Police officer among those arrested after plan to withdraw Sh28.5million backfired

Already the "Bankika na KCB" campaign has raked in an additional 30,000 accounts and over Sh200 million in customer deposits within just the first month of the promotion.

The bank is also eyeing the youth across the region with plans to replicate a similar drive in Uganda, Tanzania, Rwanda, Burundi and Southern Sudan in the next three months.

KCB expects the initiative to contribute to between 40 and 50 per cent of its growth in customer base with new accounts hitting a one million mark in the next 12 months.

Mr Peter Munyiri, the bank’s deputy chief executive reckons that the youth market has a huge potential to drive growth locally and in the region.

"In the next three months, Bankika will be our product across the region. The future for KCB is the youth. They will be customers of the bank many years to come," Munyiri told the Financial Journal

"We are convinced that the way for us is to focus on the youth market. This is a diversified market with so many risk takers."

KCB contends that this initiative also seeks to economically empower the youth and break the yoke of financial insecurity.

"As KCB, we are not only looking to form long lasting relationship with the youth but also to empower them in terms of financial freedom. We are coming up with innovative products to suit this particular group," said Munyiri.

He said the bank was working in collaboration with the ministry of Youth Affairs, colleges and Jua Kali associations to understand the needs for the youth and to develop suitable financial products and services.

"Because of the size of our bank, we are ready to take the risks with this group because they are versatile, innovative and aggressive," he said.

According to 2007 statistics, the youth aged 15-35 years stood at 13 million or 56 per cent of Kenyan population and comprised 61 per cent of the unemployed.

"This campaign is about the youth because they are the majority. It is a huge population for us in the East African region," said Munyiri.

The Bankika wave, which has hit the market and threatened to overshadow the bank’s other corporate activities, is scheduled to last between six and 12 months

"We have re-strategised because the Bankika wave hit the market and overshadowed all other corporate activities," said Munyiri.

It is widely argued that KCB’s Bankika had been coined with an intention of combating Equity bank’s dominance of the low-income earners segment of the market.

KCB posted a 10 per cent rise in first quarter pre-tax profit to Sh1.9 billion up from Sh1.73 billion in a corresponding period last year.

The bank has since halted the opening of new branches after an expansion drive that has seen the number of KCB outlets in the region rise to 210 from 180 in the first quarter of last year.

Kenyan banks are, however, relatively optimistic about the prospects for this year after a tough 2009.

Last year, many banks struggled to maintain profitability due to the effects of the global economic slowdown and a severe drought, which hampered recovery from Kenya’s bloody post-election crisis in 2008.

KCB, which has subsidiaries in Rwanda, South Sudan, Tanzania and Uganda, recorded a five per cent growth in pre-tax profit of Sh6.3 billion last year up from Sh 6.01 billion in the previous year.

The bank has come through a successful turnaround strategy that has seen it stop making losses to posting double-digit growth in net profit after posting a net loss of Sh4.1 billion in 2002/03 financial year weighed down by huge chunk of non-performing assets.

The Government has gradually reduced its shareholding to 23.1 per cent in KCB and the institution has registered significant recovery in profitability.

As part of a recovery programme to increase public confidence in the bank, in 2004 KCB launched a successful rights issue to bolster its capital to meet the Central Bank of Kenya’s requirements.

Turning around KCB involved taking hard decisions, including staff retrenchment and provision of a new direction through the appointment of Dr Martin Oduor-Otieno as the chief executive in May 2007.

Oduor-Otieno’s contract has since been extended by two more years effective May 1, 2011 to 2013, owing to a need to maintain stability as the bank seeks further growth in the region. 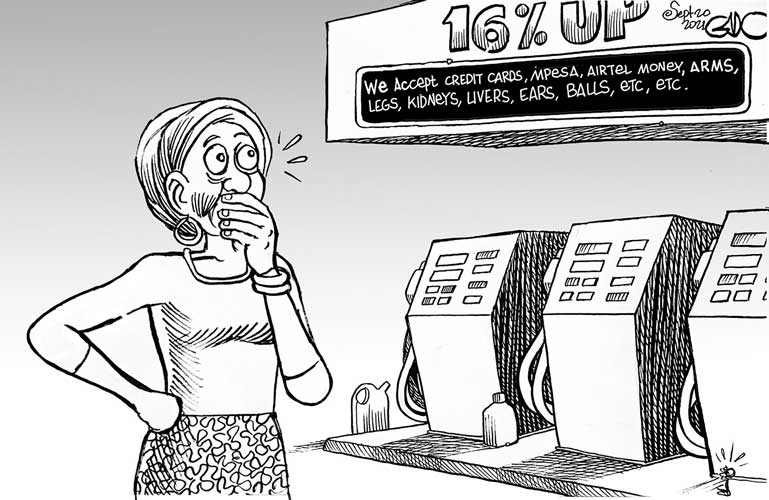 Wanjiku and the 16 per cent increase in fuel