By Jael Musumba | 1yr ago

Born and raised in Kimana in Kajiado County, Simon Ndawasa Manja grew up aspiring to be a game ranger.

He worked hard in school and eventually landed a job at the Tsavo National Park. He would work with the African Safari Club Company in 2004 as a community game ranger in the Kimana sanctuary.

In April 2009 his star was dimmed. “I was attacked by buffalo while doing the normal game patrol. I was trampled several times and left for dead.”

Immobile and writhing in pain Manja was rushed to the hospital by colleagues.

“X-ray results showed that I had sustained injuries on the spinal cord and multiple fractures of the lumbar vertebra. I was in the hospital for weeks.

The doctors at Oloitoktok Sub County Hospital concluded that Manja would never walk again as the depth of the fractures was irreparable.

“I was advised to seek specialised treatment from advanced health facilities such as the Kilimanjaro Christian Medical Centre but I could not do so as I didn’t have the financial capacity.” 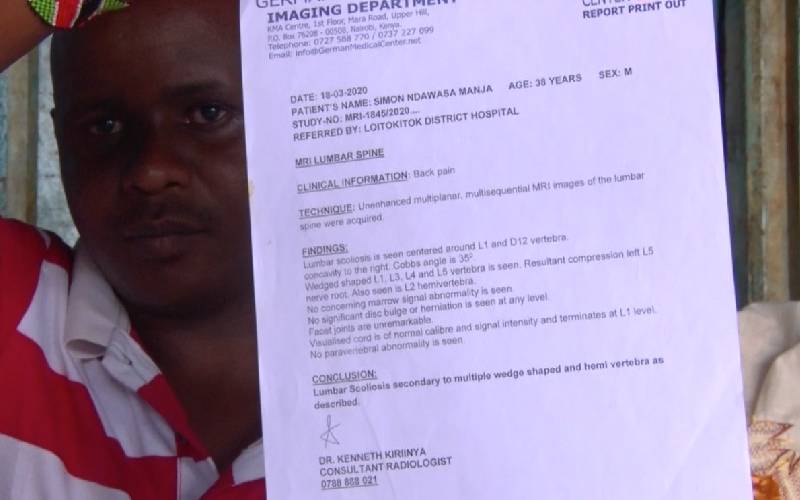 Manja’s fate was something of history repeating itself.

“My dad was a ranger and we lost him in the course of his work after being shot by a poacher in Amboseli National Park.”

Manja’s mother confirms his son was the sole breadwinner.

“My husband worked as a game ranger in Amboseli National Park and was killed by poachers when my son was only eight months old, and now seeing my only son going through the same pain. It breaks me down further,” she recalls.

Managing Manja’s condition is costly and with no one to help, the pain has become part of his daily life.

“I been in and out the hospital several times and still I have to fund my weekly medical check-ups. I always experience chest pains which doctors say needs medical management at all time”.

As Manja pursues compensation, there has been a series of dead ends as parties involved in the case have proved noncommittal.

‘I reported my case to my employers, Kenya Safari Club, and so far, they only offset my first medical bill when was first hospitalized. But my efforts to seek compensation have been unfruitful’.

As Manja’s health deteriorates with no means to meet his medical needs as well family ones, for the past two years he has been bedridden. Only good Samaritans and well-wishers pay him an occasional visit.

After the injury, my wife sunk into depression and I lost her after a three-day illness living behind a two-months-old baby that I look after while in this condition. Life has been too tough to bear, Manji laments”

Through the help of well-wishers and friends Manja has been able to sustain his daily pain relief drugs that cost Sh4500 monthly and the physiotherapy that requires Sh2000. This worsens his health whenever his accounts run dry with no help coming through.

“I have written several times to the government bodies to fast-track my compensation but up to date, I haven’t received any response. I could have taken a legal route but again raising the cash for hiring a competent lawyer is out of reach.”

Manji has to bank his survival on well-wishers.

My dad died while protecting wildlife. I never got a chance to enjoy fatherly love and now it’s me facing the same fate on my deathbed. My child might never get the feel of fatherly love and care as well,” he says.

Manja can neither walk nor sit for long periods before relapsing to pain triggered by the fractured spinal cord.

He has one request: “The government has to take up this matter with seriousness, I need urgent medical support and also compensation”.

By Standard Checkpoint 28 mins ago
Premium List of elected MPs

By Fred Kagonye 54 mins ago
Johnson Sakaja, Polycarp Igathe meet up for coffee