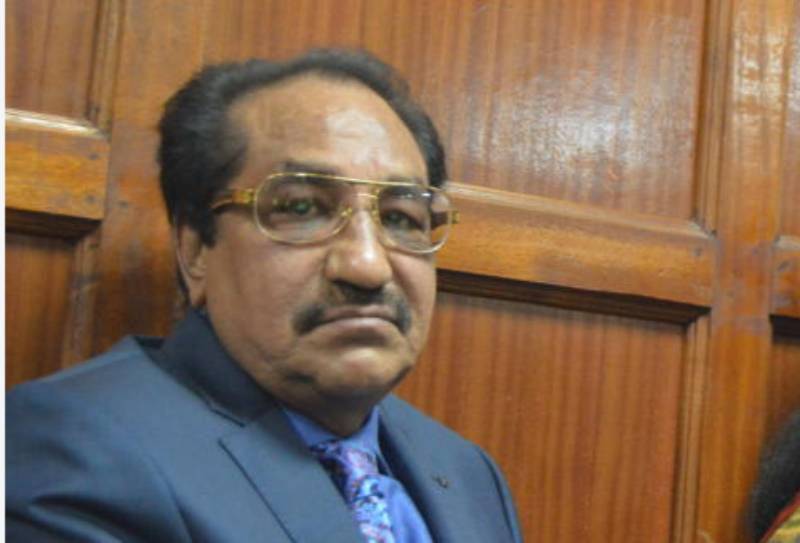 Keeping up with the string of lawsuits filed in a vicious fight between billionaire Mohan Galot (pictured) and his three nephews for control of billions, can be tedious.

What has been unraveling in the corridors of justice as blood relatives take on each other has been as dramatic as a soap opera.

Mohan, the founder of London Distillers, is locked in a legal battle with his relatives for the control of the multi-billion shilling estate.

The mogul claims the three nephews - Pravin Galot, Rajesh Galot and Ganeshlal Galot – are hell-bent on harvesting where they did not sow.

He accuses them of attempting to initiate a coup against him after he put them in charge of his companies.

However, the nephews deny ever plotting to steal from the old man, but insist they also have a stake in the estate.

The dispute is yet to be settled in 27 years.

Although the cases are largely civil, the dispute has also spawned criminal proceedings with both sides accusing each other of forging documents in a bid to get the better of the other.

Mohan and his wife have already been arraigned on accusations of forgery. He denied the accusations and trained an accusing finger on two nephews for conspiring to defraud him and Galot Industries Ltd.

To speed up the case, he sought leave to institute private prosecutions against Rajesh and Pravin at the Milimani Chief Magistrate’s Court.

The private prosecution was, however, stopped by High Court judge John Mativo.

Justice Mativo was also irked by the slow progress of the cases.

“It is common ground that the parties in this case have numerous interrelated suits pending in court. For unexplained reasons, the said suits have remained undetermined for years, a position I find perplexing and unacceptable,” he said on December 16, 2019.

“The common thread in the said suits as far as I can discern it from the material in this case is a dispute between the directors and shareholders of Manchester Outfitters Ltd.”

Manchester Outfitters is a garment company renown for the supply of police uniforms. Mohan is its chairman and governing director.

Between 1993 and 2001, a total of 14 civil suits had been filed in the High Court involving his nephews, who are also directors or shareholders of Manchester Outfitters.

The scramble for control of the billions also extends to Galot Industries, Galot Ltd and King Woollen Mills Ltd where Mohan is the chairman.

But the parties have also been fighting for control of an expansive residential estate along Kiambu Road.

On April 17, 2020, as the country grappled with the Covid-19 pandemic, Mohan added yet another case to the files.

He moved to the Environment and Land Court asking it to eject 22 workers from the Kiambu property. Ownership of the property is already subject of several court cases.

Mohan argued that the workers occupied the estate as part of a larger scheme by his relatives to dispossess him of the property.

He claimed he felt unsafe visiting the property, arguing that the deployment of the workers in the estate’s servant quarters was meant to intimidate him.

As a result, he explained, he could not enjoy his stay on a property he claimed to have developed, including maisonettes for use by his guests.

From time to time, he told the court, he would also allow his relatives to stay there as his guests at his pleasure. However, his three nephews, whom he said he had employed in the estate, abused this hospitality.

Mohan said the nephews took control of some workers whom they converted to a parallel outfit to take care of their own interests.

“The said relatives illegally employed the defendants (the 22 workers) as their employees in various capacities and have thus forcefully taken up the servants quarters, which he had constructed for his employees,” Judge Lucy Gacheru said of Mohan’s submission in her judgement.

As one ground for the removal of the workers from the property, Mohan claimed they were unlawfully being paid from his business proceeds.

He also accused the workers of not observing health and safety guidelines as issued by the Ministry of Health as a means to curb the spread of Covid-19.

As a result, he asked the court to eject the workers from the property, which he called Mohan Galot Estate in the suit.

However, Justice Gacheru ruled that the case brought by Mohan was almost similar to another one that was being handled by a different court. She dismissed the suit pending the hearing of the other case.

The workers, through the affidavit of Walter Omosa, insisted that they resided at ‘Galot Estate,’ not ‘Mohan Galot Estate’ as Mohan had put it.

They acknowledged that they were employees of Mohan’s relatives, who they insisted were co-owners of the suit property.

“That the defendants are aware that the applicant and their employers are members of the wider Galot family, and that there are several pending court cases on the ownership and control of the suit property,” said Omosa.

Indeed, in 2009, Mohan was able to get the court’s ear and the workers were temporarily locked from the premises where they lived and worked.

However, this decision was reversed and injunction issued against such ejection until the case between the siblings on the property was finalised.

“The plaintiff’s attempts to evict the respondents from the suit property was made and stayed and the instant suit is therefore mischievous and an abuse of the court process,” said Omosa, while refuting claims that they did not observe Covid-19 health and safety measures.

Mohan, said Omosa, has always known the 22 were employees of some members of the Galot family.

If anything, in a memorandum dated November 10, 2004, Omosa said, the then farm manager wrote to Mohan informing him of staff changes in which employees were allocated a particular employer and therefore could not take instructions from anyone else.

Afterwards, added Omosa, Mohan even prepared a map in which he indicated the portion of the property that was to be managed by each of the Galot family members and their employees.

The employees were to fall within the employer’s property allocated to them.

He denied Mohan’s claims that the workers were being paid from his account, noting that all their bills were paid for by their employers.

They accused Mohan of using the pandemic to settle his feud.

Moreover, Omosa explained, the issue of whether they could be kicked out of the suit property could only be settled by the Employment and Labour Relations Court.

In a supplementary affidavit sworn on July 15, 2020, Mohan denied alluding to any employment dispute.

The billionaire also questioned the workers’ claims, which he said came from their employers that the suit property was owned jointly by him and his three nephews.

The workers, he said, did not provide proof of ownership.

Rental prices fall in Kenya due to under-performing property market

The United Kingdom, which has the biggest official death toll in Europe from COVID-19, is grappling with more than 20,000 new coronavirus cases a day