Greed and love for shortcuts sinking dreams of the youth

By Clay Muganda | 1yr ago 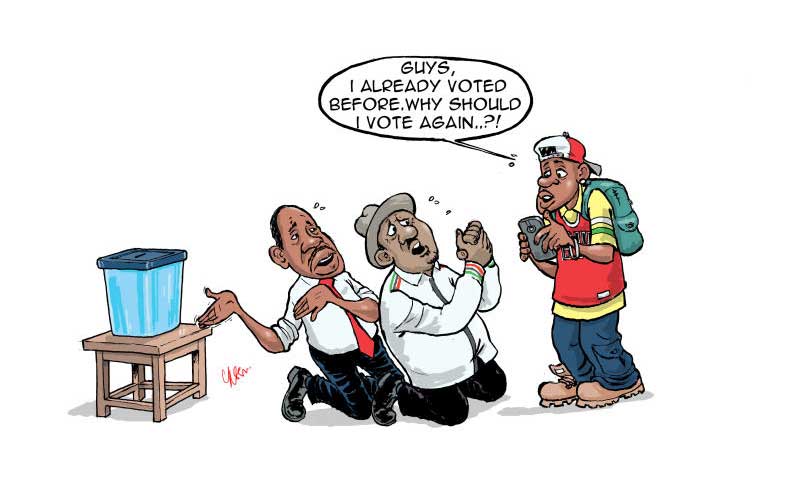 Youth. Nothing excites Kenya’s younger population more than being referred to as such by politicians who promise them the sun, the moon and the stars every election cycle, but leave them wallowing in sufferance and fighting each other.

Almost daily, Kenya’s youth — people aged between 18 and 34 as per Kenya’s Constitution, and 15 and 35 as per African Union’s Africa Youth Charter — go for each other’s throats, online or offline, over politicians' actions. At the end of the day, they gain nothing but the politicians go their merry way, happy that they have a group to use and abuse.

Midweek, younger Kenyans and politicians were at it again, with two groups of the former clashing over which politicians should visit their locality, while the latter giving statements or addressing rallies and giving the youth more promises — as it has become the norm.

One can safely say that using and abusing the youth has been normalised by politicians, only that the victims seem comfortable in their situation, and do not ask why the better life they were promised has not materialised. For ages, Kenya’s youth have borne the brunt of poor governance and skewed distribution of State resources, mainly because the people who formulate the policies and control the purse strings are driven by greed.

Ironically, as the youth suffer, the parental authority, in the draft Kenya Youth Development Policy of 2018, says youth-related issues are and have been a priority. It acknowledges that the youth are disadvantaged in socio-economic outcomes such as employment, with a majority on the periphery of Kenya’s social, economic and political affairs.

It is aware that the highest rates of labour underutilisation are among the youth and many suffer from low education attainment, skills deficits, poor health and lack sufficient economic empowerment. In the light of that, one would think that with the increasing entry of younger people in the political arena and State offices, things would change. Unfortunately, this never happens because younger politicians and State officers are inducted to the cult of corruption.

Younger politicians do not push for the formulation of new youth-oriented policies or the implementation of previous policies that can uplift the living standards of the legion of youth who lack opportunities. Article 55 of the 2010 Constitution holds that the State shall take measures to ensure the youth access relevant education and training; have opportunities to associate, be represented and participate in political, social, economic and other spheres of life; access employment and are protected from exploitation.

Then there is the National Youth Council — established through National Youth Council Act 2009 — whose mandate is to facilitate, co-ordinate, promote, monitor and advocate youth issues and youth-led initiatives. It is also meant to ensure “effective coordination of youth-related interventions and involvement of the youth in planning, monitoring and evaluation of youth interventions.” Paying lip service to youth-related issues is not new and several repetitive policy documents are gathering dust in government offices as younger leaders amass wealth after riding on the back of their peers by promising to be their saviours.

Before the current administration came up with its youth policy, the previous one had the National Youth Policy Sessional Paper of July 2007, which was to provide policy framework for addressing issues affecting the youth and whose goal was to promote youth participation in community and civic affairs to ensure that their programmes are youth-centred. There is also Vision 2030, which envisages “responsible, globally competitive and prosperous youth” and whose interventions are “establishment of youth centres, mentorship, development of creative industry hubs and youth enterprise financing.”

What are the outcomes of all the youth development policies, you may ask, because, the youth are only engaged when politicians are inciting them or when they are being given promises that are not kept.

On the flip side, it would not be wholly right to blame politicians and policy makers — young and old — fully for the predicament of Kenyan youth because they are blinded by little short-term gains, mostly the coins thrown their way for attending political rallies and shouting themselves hoarse. Ideally, they are more interested in eating the fish than learning how to fish. If there is anything else that they really want to know, it is how to steal fish because their peers in politics and State offices have shown them that the only way of making it in Kenya is not through hard work, but thievery of public resources. Large-scale, and not petty thievery, because petty criminals get jailed, but big thieves get elected to political offices or appointed to government positions so they can enjoy their loot and steal some more. That is the message from youthful politicians to the youth who are always encouraged to get excited when they are referred to as sufferers — and vote like zombies.?

Hit Squad captain Okoth is not ready to retire just yet
Boxing
By Ben Ahenda
49 mins ago
Nairobians hope Sakaja will deliver where Sonko and Kidero failed
FEATURES
By Hudson Gumbihi
2 hrs ago
All is set for school games to resume after two-week break
Football
By WASHINGTON ONYANGO and ERNEST NDUNDA
2 hrs ago
Kenya Sevens team hoping for improved show in Los Angeles
Rugby
By Washington Onyango
3 hrs ago
.