We are fighting for survival not profits, says Equity boss 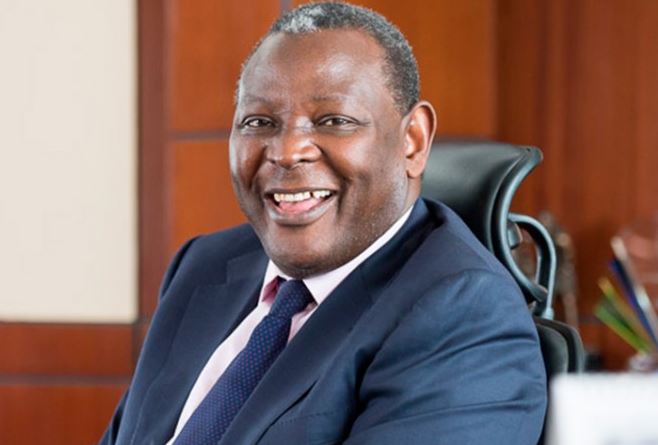 Mwangi studied all the major pandemics and their impact on the health, social and economic fabric years after they struck.

“Pandemics have a way of coming back and terrorising societies every 100 years,” he told Financial Standard in an interview.

It’s now five months since the first Covid-19 case was reported in Kenya, and the toll of the virus on livelihoods has been devastating.

Six out of 10 households blame the virus for unemployment within their ranks, according to the latest government data.

Mwangi said the extensive research on pandemics such as the 14th century’s Bubonic Plague that killed up to 200 million people and the Spanish Flu in 1918 gave him the context of what the future could look like, helping him lay the necessary groundwork for the business.

The Equity boss is one of the country’s business leaders leading the fight against the deadly virus in his role as the chairman of the health committee of the Covid-19 Fund.

He said he has committed the tier-one bank’s infrastructure and most of his time in fighting the virus that has now claimed over 700 lives in the country.

“Everybody now says I’m fighting Covid-19 more than running the bank. That is what I ought to be doing. Kenyans will never forget what I did when they needed me the most to lead a fight we are ill-equipped for,” said Mwangi.

He has since delegated some of his duties and temporarily stepped aside from the board, with Executive Director Mary Wamae taking up his position.

“Those who’ve been asking will there be Equity without James Mwangi can now see,” he said.

Born to peasant farmers in Nyagatuga village in Murang’a 58 years ago, Mwangi’s rags-to-riches story is well documented, but never grows old in that it best exemplifies the role of businesses in times of crises.

The astute entrepreneur has steered the lender from a collapsing village trading society to a pan-African lender with an asset size of over Sh605 billion and a philanthropic arm that has lifted millions of Kenyans out of poverty.

Mwangi sparked a micro-financing revolution and banked the unbanked poor by removing hurdles such as ledger fees and minimum balance requirements for opening accounts.

Equity has since risen to become Kenya’s largest bank by member accounts, controlling 60 per cent of the market share.

Equity Group Holdings also recently acquired a majority stake in a Congolese bank at a cost of Sh10.3 billion as the race to the pinnacle of Kenya’s banking sector intensifies.

Its model, which has seen Equity loyalists earn the nickname “member”, has attracted the attention of top universities in the world such as the Harvard Business School that has compiled a book on the same.

“We said opening a bank account is a human right, not a commercial venture,” Mwangi told FS about the lender’s journey.

He, however, noted that the coronavirus pandemic nearly rendered the bank’s purpose redundant.

“Our purpose as a bank is to change lives and livelihoods by allocating resources to people to actualise their dreams, but all those dreams had been eaten by the coronavirus, including restrictions that saw people not going to their businesses,” said Mwangi.

This crossroads prompted the bank’s mission to change, he said, shifting focus to saving human lives and livelihoods.

Mwangi said financial institutions can do more than any other sectors during this crisis by offering relief to borrowers and keeping businesses afloat.

He urged lenders to forget about profits, for now, adding that it would be immoral for them to push customers to sell their property during this difficult time to service loans.

“If people are crying, cry with them, if they are laughing, laugh with them and if they are mourning, mourn with them. Don’t go dancing on the graves of the people being mourned,” said Mwangi.

In his view, the Central Bank of Kenya (CBK) can give a bank a licence, but the operating licence is given by society.

“It’s not about profits now, profits will come after. Profit comes from my customer if I make my customer survive, recover and thrive. My profit will bounce back in a big way afterwards,” he said.

“If I kill the goose that lays the golden egg by saying let me protect myself, I will be killed not by my actions, but the actions of the customer.”

From his own pocket, he has donated Sh300 million to help fight Covid-19, raising the bar for Kenya’s wealthy.

The bank has a large portfolio of loans to Small Medium Enterprises (SMEs), which might never reopen again.

CBK has warned that SMEs are at risk of collapsing and need urgent help to weather the coronavirus economic fallout.

Mwangi said the bank moved swiftly to ensure businesses are able to ride out the pandemic.

In May, it restructured customer loans of up to Sh92 billion for three years.

Mwangi had previously observed that the economic recovery from the virus might take up to three years.

“We gave them a grace period of three years both of principal and interest for them to survive,” he said.

It is for this reason that the lender withdrew the Sh10 billion slated as dividend payment to shareholders for the 2019 financial year.

Mwangi termed the withdrawal a “sacrifice” by Equity Group shareholders who hadn’t missed a dividend payout in over 15 years.

“We are strong enough as a corporate, and we can make the sacrifice we made to withdraw the Sh10 billion dividend that we had declared,” he said.

“Shareholders demonstrated the seriousness with which they take the purpose of the bank. It’s not that we required the money.”

Mwangi said the move had seen about Sh60 billion hit the bank’s vaults in the last few months, forestalling liquidity constraints. This as international lenders such as the World Bank, the International Finance Corporation (IFC) and the African Development Bank (AFDB) extended credit facilities to the bank for onward lending to SMEs.

Negotiations are also underway for billions of shillings in credit from the European Investment Bank, German Development Bank and Proparco, which is partly owned by the French Development Agency.  “We were told, so as not to get any liquidity shocks, here is the money,” said Mwangi.

He said the African Guarantee Bank and the MasterCard Foundation have also committed support.

“The bank is now not under risk anymore… our balance sheet and capital are protected,” added Mwangi.

“The monies will not only protect the bank’s liquidity but also be directed to keeping SMEs alive.”

Other local leaders have also received loans to support SMEs and borrowers hit by the Covid-19 pandemic.

This month, Diamond Trust Bank Kenya inked an agreement for a $50 million (Sh5.4billion) loan with the IFC, which is a member of the World Bank Group.

Mwangi further noted that the market has also reacted positively to the bank’s measures to lessen the virus’ impact.

He said in the first quarter of this year, deposits have gone up 20 per cent, the fastest in the last five years, while non-performing loans had also dropped.

Mwangi said only 40 per cent of the bank’s customers have asked for loan accommodation, with the rest paying their loans as usual.

He is part of a United Nations team set to champion the “rebuilding” of the world by showing that businesses that put purpose first can also be profitable.

He said in the first quarter of this year, the bank increased its loan provisions tenfold and the provisions will be enhanced going forward.

“We aren’t interested in profits, we don’t do business to be seen, we do business the way it ought to be done,” said Mwangi in his parting shot.