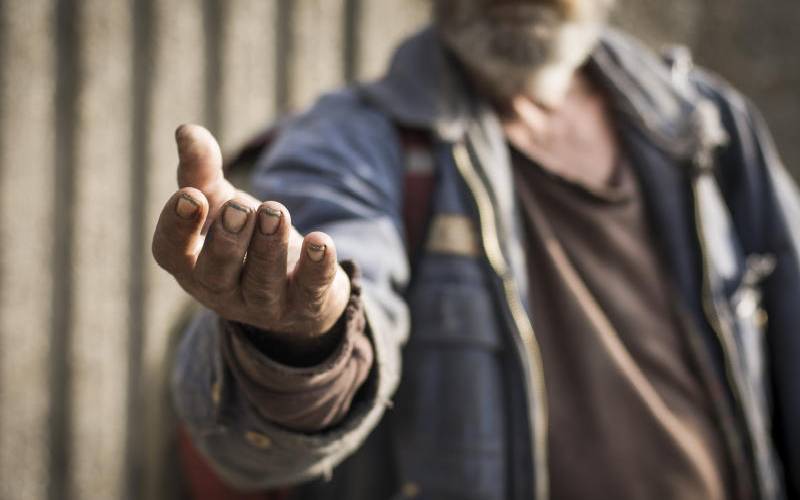 If the late socialist politician Josiah Mwangi (JM) Kariuki were to find himself in today’s devolved Kenya, he would likely describe some counties as hamlets of 10 millionaires and 10 million beggars.

Official data shows that while there are counties endowed with a lot of resources - fertile farms, highly productive industries, bustling markets, popular hotels or valuable minerals - most of the proceeds flow to a few probably well-connected individuals and businesses.

Amid the glamour of plenty is an eyesore of poverty, with a huge fraction of residents lacking nutritious food while a few fill up their waste bins with untouched meals. While millions spend the night in squalid shelters, a few wake up in grand and opulent mansions.

This, according to an analysis of various data, is the story of Bomet, Uasin Gishu, Nyandarua, Nakuru, Kisumu, Mombasa, Kakamega, Kisii, Elgeyo Marakwet and Kilifi.

Other counties whose performance in wealth creation does not seem to match their poverty rates include Kajiado, Nandi and Turkana.

This leaves the governors of these counties with their work cut out for them, even as the country gears up for a general election in two years.

An analysis of the 2019 census data showed that these counties were the homes of a large number of the affluent, with most citizens living in better houses, owning cars and having internet connections in their homes.

They enjoy functional services, like piped water, yet most buy bottled water to drink.

In fact, going by census data, the 20 constituencies that host the country’s well-to-do are concentrated in Nairobi, Kiambu and Mombasa counties. The other counties that feature are Kajiado, Machakos, Kisumu and Nyeri.

But these riches mask another reality: destitution.

Data from the Kenya National Bureau of Statistics (KNBS) shows that while counties such as Nakuru, Kisumu, Uasin Gishu, Mombasa and Nyandarua are endowed with a lot of wealth and rank among the top 10 richest devolved units in Kenya, a big chunk of their population lives in abject poverty.

Counties such as Mombasa and Kilifi, with a huge coastline and port, fine beaches, hotels and resorts that have attracted dollar-spending tourists, perform dismally when appraised on equality, as an analysis of data has shown.

It is the same with the Rift Valley counties of Nakuru, Bomet, Uasin Gishu and Kajiado, dubbed the food baskets of Kenya.

A ranking of Kenya’s richest counties in wealth creation that was released last year showed that Nakuru was the second-largest county in economic well being after Nairobi in the inaugural in 2019 Gross County Product (GCP).

Other counties that were ranked highly by GCP, which looked at economic productivity, included Nyandarua and Elgeyo Marakwet.

However, save for Nairobi, Meru, Machakos and Kiambu, these counties have done badly in terms of poverty reduction and do not feature in the top counties with low poverty rates.

Nairobi, Kenya’s capital city and commercial hub, is the only constant, enjoying the highest economic productivity and the lowest poverty rates.

Prof XN Iraki, an economics lecturer at the University of Nairobi, says this is an indicator of economic inequality.

Another 2013 survey by KNBS found that five counties with the worst income inequality are at the Coast.

The ratio of expenditure by the wealthiest to the poorest is 20 to one and above in Lamu, Tana River, Kwale, and Kilifi. This means that those in the top decile have 20 times as much expenditure as those in the bottom decile. This is compared to an average for the whole country of nine to one, noted the 2013 report on inequality.

Using the ratio of average income in the top to bottom ward, the report found that the five most equal counties are: Kirinyaga, Samburu, Siaya, Nyandarua and Narok.

This is partly confirmed in the Comprehensive Poverty Report released on Monday, which looked at monetary poverty and multidimensional poverty.

Kirinyaga, for example, had the fourth lowest poverty rate, with 19.4 per cent of the population living below the poverty line. In the GCP ranking, Kirinyaga was at position 27.

Siaya is the other county with better performance, with very few of the population living below the poverty line. Its performance on poverty rate is better when compared to its economic ranking.

It is the same with Samburu. But it is a different story for Nyandarua.

Lamu, another coastal county, also goes against the 2013 finding by KNBS (though our analysis is not necessarily a measure of inequality as an analysis of the two reports at best only shows correlation). Lamu, according to our analysis, is one of the counties with the lowest poverty rates.

It appears that, although there is a lot of wealth in these counties compared to Lamu, it has not percolated to everyone, with a number of residents feeding on crumbs while the main meal goes to a few.

Dr Scholastica Odhiambo, an economic lecturer, points to high population and unemployment in these counties as the reason for the variance.

In 2017, the total value of all goods and services produced in Nakuru was Sh517.4 billion, or 6.9 per cent of the national gross domestic product (GDP). This was an improvement from a share of 5.4 per cent in 2013.

A lot of economic activities have been going on in Nakuru County. Conference tourism has been booming, with many organisations holding meetings in Naivasha.

But it is the efficiency with which the county does agricultural mechanisation in the expansive ranches that has raised productivity, according to Tegemeo Institute, an agricultural policy think tank. The county contributes 10.6 per cent of all agricultural produce in the country.

Nakuru is also the home of flowers, one of the country’s foremost foreign exchange earners.

Unfortunately, this wealth has flowed to a few business magnates, including hotel and flower farm owners. There have been complaints of mistreatment of flower farm workers, with most saying they have been forced to work under deplorable conditions and for poor pay.

The county is also famed for large ranches owned by a few.

The report also highlighted, among other things, poverty and unemployment levels as well as access to healthcare facilities.

This report, together with the census data of 2019, would later end up being critical in designing a new revenue-sharing formula.

The comprehensive report on poverty in counties released on Monday was informed by the 2015-16 Kenya Integrated Household Budget Survey (KIHBS), which mapped out the well-being of Kenyans living in various counties.

Among KIHBS recommendations for increasing incomes and reducing inequality in Kenya was putting in place policies that would ensure higher overall economic growth, and a shift in the distribution of incomes to poor people.

However, when the Commission on Revenue Allocation finally presented its recommendations on the third basis for equitable sharing of revenue among county governments, it ended up being a highly divisive formula that threatens to shatter political alliances.

So far, it looks like the formula has favoured counties with low poverty rates, a situation some critics say defeats the very spirit of devolution.

However, proponents of the formula have insisted that money has to be channelled to people who need critical services, such as healthcare and education.

And it happens that the richest counties, with low poverty rates, are also the most populous. ?