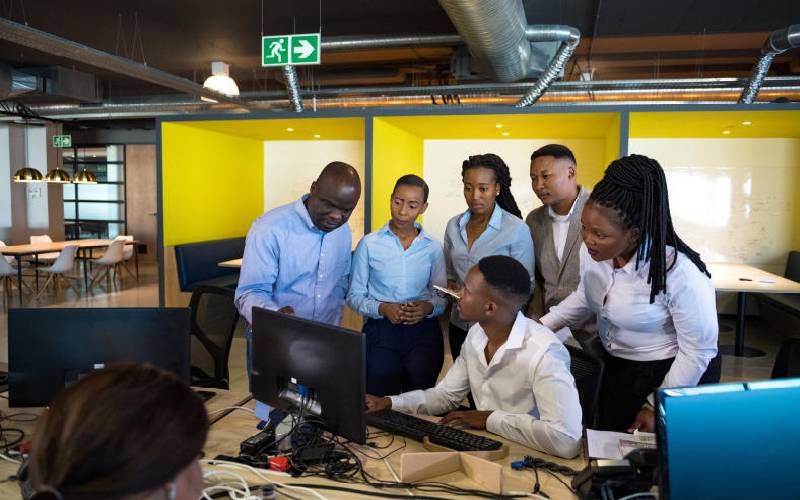 Kenyans are paying a heavy price for ageing, techno-phobic civil service after the Covid-19 pandemic pushed the majority of them into hibernation, leading to disruption in the delivery of services.

Ageing public servants, 58 years and above, as well as those with underlying medical conditions, have been asked to work from home, leaving the government machinery almost grounded.

Official data shows the majority of national government employees, nine out of 10, are 46 years and above.

However, most of these civil servants, the census results of last year revealed, fall in the so-called ‘analogue’ generation and are not wired to work from home.

Apart from owning a smartphone, most of them don’t use the internet and laptop/desktop while at home. Moreover, few have ever shopped online, reflecting a disconnect from the new virtual reality.

Lawyers who rely solely on conveyancing, for example, have been significantly hampered after the closure of the land registry, said Gad Ouma, managing partner at GM Gamma Advocates.

“There are so many lawyers rendered jobless. For more than 50 per cent of our law firms, their biggest revenue source is from commercial and conveyance transactions undertaken at the land registry,” he said.

Thirty-five per cent of the employees, according to a report prepared by the Public Service Commission (PSC), are aged between 51-60. They are likely also to be the key decision-makers.

Slightly over half of the 69,445 civil servants as at end of 2016 were aged between 46-50, according to the report titled Human Resource Planning and Succession Management Strategy for Public Service.

Covid-19, a deadly respiratory disease caused by the novel coronavirus, has disproportionately affected ageing population, with those with an underlying condition such as diabetes, hypertension and cancer comprising the largest fraction of fatalities.

Health Cabinet Secretary Mutahi Kagwe recently noted that most fatalities of Covid-19 have occurred in those aged between 30 and 59.

“What this means is that this group is the one that can spread the disease, that is why we are asking people to stay put and avoid travelling upcountry,” said Kagwe.

Because most government staff fall in the most vulnerable age band, they have had to obediently observe the social distance rules by staying at home.

Ideally, most of these workers could have been working remotely from home. Unfortunately, a lot of them are not tech-savvy and neither does the government have the work-from-home infrastructure.

A senior government official in the Ministry of Public Service, Youth and Gender Affairs, however, insisted that most of those staying at home are actually working.

While agreeing that “the ageing is high”, the official who could not be quoted as they are not allowed to speak to the media, said the government had since put in place the right infrastructure to enable most of the workload to be pushed to virtual platforms.

“If these people are not working in an office, they could be working from home,” said the source, noting that a huge chunk of the workload, particularly for senior workers, has been moved to virtual platforms.

“As early as 2014, we already had the e-government, the fibre optic and so on. So, the capability has been there. Like now we do our HOD (Head of Department) meetings virtually. On Saturday, we had our first virtual graduation at the Kenya School of Government,“ he said.

The only challenge with working from home reckoned the source, is being able to measure productivity.

However, a 2016 survey by the Kenya National Bureau of Statistics (KNBS) indicated that only 40 per cent State corporations, where employees are also being encouraged to work from home, use cloud computing - the practice of using a network of remote servers hosted on the Internet to store, manage and process data.

Available statistics indicate that out of close to 19 million Kenyans actively engaged in some economic activity, only 4.5 million have access to a computer at home, making it difficult for companies.

However, it is those aged 35 and above that are highly disadvantaged. They have barely set up a work-from-home infrastructure that would enable them to continue offering critical public services remotely.

They also did not have a laptop, desktop or tablet which they could work with from home. There were 4,527,254 that said they used these digital devices in their homes. However, only 11.1 per cent were aged 45 and above.

Another 12.3 per cent of this age band said they had ever bought a product online, a result that reflected an inclination for people to operate remotely.

The youth, those aged between 18 and 34, and who are less represented in the civil service, were the digital champions.

Six out of 10 of people aged between 15 and 34 told KNBS they used the internet at home, laptop/desktop/or tablet and had shopped online.

The explosion of Covid-19 has hastened the embrace of the future of work, with the office quickly being abandoned as a safety and health measure. However, experts reckon the future of work will be adopted by firms also as a necessity as businesses move to save on their overhead costs.

It is a new environment in which the young, energetic, suave, and tech-savvy have thrived like fish in the water.

By the end of 2019, there were 865,200 staff working for the government in ministries and parastatals, independent institutions like the Teachers Service Commission (TSC), county governments and the disciplined forces.

Of this workforce, the youth comprised 17.4 per cent, with a paltry 0.03 per cent occupying senior positions.

Ironically, Kenyans aged below 45 make up nearly 86.3 per cent of the population, analysis of census data shows.

This brings into sharp focus the country’s continued reliance on aged civil servants even as Covid-19 pandemic shifts the future of work away from the office.

While the over-reliance on an ageing workforce -- mostly because they tend to be highly skilled -- straddles the public and private sector, it has been acute in the former.

Official data shows that of the population that said they were working last year, 44.8 per cent were people aged between 15 and 34. Another 50.3 per cent were aged 35 and above.

The high labour participation among the youth in this report done by KNBS, however, is due to the inclusion of informal employment, whose earnings are sometimes hardly enough for a day’s upkeep.

For a while, the government has frozen recruitment of new civil servants- except for critical ones such as teaching, security and health to contain the ballooning wage bill.

It is a situation that has denied Kenyans the infusion of young blood into the public workforce.

But with Covid-19 turning the conventional work environment into its head, it is the versatile young people with a knack for the cyberspace that have been left to save the day.

The government, whose efforts to automate most of its operations have never gathered steam, has to bite the bullet if it is to remain relevant to taxpayers.

“It means now the reforms we had wanted to do, we have to,” said the anonymous source who noted there was a lot of resistance before.

“But now they are being forced to do it.”

Margaret Kobia, the CS in charge of Public Service, did not respond to our calls or text messages.

However, Mary Wambui, the principal public communications officer at the ministry, reiterated that while people in such departments as communications could work from home, those offering essential services like accounts, human resource and procurement continued to work in an office.

Zoom is an online chat software that has become popular during this period as more people hold meetings virtually.

By Special Correspondent | 14 days ago