Beware of absurd hope deadlier and more toxic than pandemic 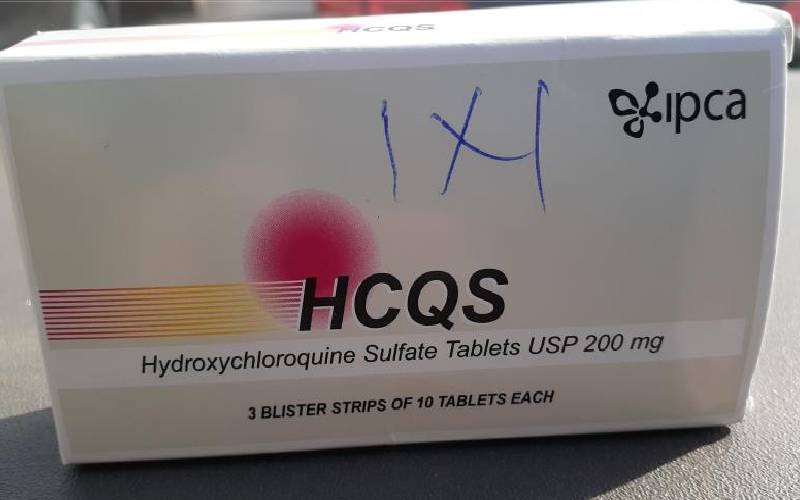 Kenyans woke up yesterday to a viral video revisiting an old topic that had caused anxiety and panic in equal measure across the globe.

Hydroxychloroquine is turning out to be the most divisive molecule of the pandemic.

The video, which Facebook, Twitter and YouTube pulled down, features a group of people in white lab coats calling themselves “America’s Frontline Doctors” addressing a press conference in front of the US Supreme Court in Washington, DC.

The video was published by the right-wing media outlet Breitbart News and US President Donald Trump shared multiple versions of the video with his 84 million Twitter followers on Monday night despite the dubious claims running counter to his administration’s own public health experts.

A speaker who identifies herself as a doctor makes a number of claims, including that “you don’t need masks” to prevent spread of the coronavirus, and that recent studies showing hydroxychloroquine is ineffective for the treatment of Covid-19 are “fake science” sponsored by “fake pharma companies”.

“This virus has a cure, it’s called hydroxychloroquine, zinc and zithromax,” the woman claims.

The proclamations are playing right into the human psyche at a point when confirmed cases of the coronavirus are on the rise.

At this point, many people could clutch onto any hope, ridiculous as it may seem, because when they think of dying from an unseen microbe, anything that gives an iota of optimism is welcome.

Hydroxychloroquine tests, initially done on 20 people, had indicated that it might have some promise in reducing the severity and even death from infection with SARS-CoV-2, the coronavirus that causes Covid-19.

WHO commissioned it as one of the five tracks on the Solidarity Trials I, that would be carried out in various centres and countries across the globe.

At the time of this commissioning in early April, the world, as is now, was looking for a solution to the pandemic and anything that was rumoured to be promising and had some theoretical sense behind it, was to be tried.

By then, several people in various parts of the globe had already bought the drug off the shelves and dosed themselves, with some either losing their lives from the toxicity of the drug or battling to stay alive in hospitals.

This panic-buying and stocking of this drug negatively affected two groups of people whose lives literally depend on the drug – people with lupus and arthritis. All of a sudden, they could not access the drug that they need.

With this viral video though, that anxiety and uncertainty of not having access to this medicine will be revived when people start another wave of panic-buying.

On June 17, the WHO stopped this arm of the Solidarity Trial because “data from Solidarity (including the French Discovery trial data) and results from the UK’s Recovery trial both showed that hydroxychloroquine does not result in the reduction of mortality of hospitalised Covid-19 patients, when compared with standard of care.”

Science has no corners. It either works when subjected to the test or it does not work. Putting hydroxychloroquine through a proper research testing by medics and experts was the whole point of the trial and the results are obvious.

While the medics are well within their right to inform the public about the results that they have seen within their practice, such anecdotal evidence cannot be used universally as the solution unless it has undergone the proper peer review.

Any scientist and medic worth their salt knows all too well what the process is, and especially now when the world is desperate for a solution.

In Kenya, the Aga Khan University Hospital started a clinical trial on Actemra, a drug used in the management of cancer.

Its initial results from the US are promising in preventing one from getting to the severe/critical end of Covid-19.

These treatment options were initially selected based on evidence from laboratory, animal and clinical studies.

Msambweni Campaigns: ODM embarks on door to door campaigns due to the Covid pandemic