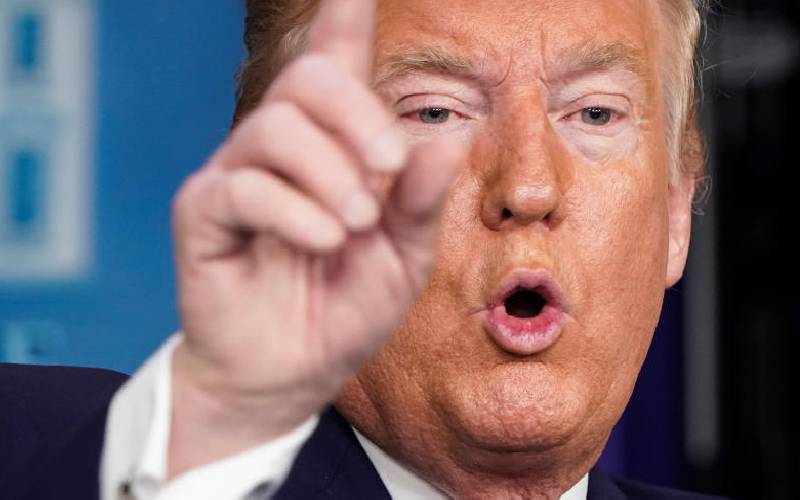 Donald Trump (pictured) was elected president of the United States of America the way drafters of the 1787 constitution wanted - by imposing the Electoral College to despise 'democracy'. He was not the first to lose in the popular vote and win in the Electoral College; George W Bush did the same in 2000.

Expecting to lose the popular vote, each worked smart to ensure he got the votes that counted in the Electoral College. Bush and Trump outsmarted supposedly very smart people in Albert Gore and Hillary Clinton. Trump enjoyed leading 'smart' people by the nose and then firing them unceremoniously. He likes doing things as Frank Sinatra would sing, “My Way.”

As long as there was no serious crisis, his way seemed to work. The third president to be impeached, he showed no remorse for his seeming uncouthness.

He survived the Senate trial that gave him strategic 'bonga' points in the anti-establishment rural America where electoral votes reside. His way was their way, for a while, until coronavirus hit America and Trump’s way became a global liability as he, and America, lost the coronavirus moment.

He could not blame it on his predecessors Barack Obama or Bush, or even on China. To his credit, Trump had tried solving challenges inherited from Bush and Obama in Afghanistan, Iraq, Syria, and Libya and had a modicum of success.

He had even tried to create his own 'Nixon Moment' in North Korea, the way Obama did in Cuba, only for his advisers to sabotage the effort.

They did it by making inappropriate comments at crucial times in negotiations. National Security Adviser John Bolton’s supposed comment about fixing North Korea the way Nato had fixed Libya was a sure way to sabotage discussions.

Although Trump showed leadership in North Korea, he failed to lead when the coronavirus opportunity arose. His indecision and disdain for anything not white American made him lose the coronavirus moment. He, instead, made contradictory statements that made him look confused.

Initially, he tried denying the reality only to be forced to swallow pride and appear to act half-heartedly. He proved to be a very poor consumer of intelligence and worse, lacked the acumen to understand and properly act on the intelligence made available to him.

Policy makers, in their worldwide habit of slighting issues, failed partly because they have inherent prejudices that blind them to realities. The prejudices deny them capacity to understand and act properly. By the time they wake up from superficial self-grandeur, they end up plunging their countries into panic modes.

Trump belatedly tried to act forcefully, only to lose it partly because his administration’s believability level is low. He went to Norfolk to launch a floating hospital called 'Comfort' to take regular patients and relieve other hospitals of the worry of coronavirus. He also declared war on coronavirus by turning Detroit and related industrial zones into huge factories for coronavirus related fighting materials.

With the US government as the primary market, this deficit spending economic stimulus package might pull the US out of its current economic squeeze, the way World War II pulled the US out of the Great Depression in the 1930s. His low believability undermined his anti-coronavirus war strategies. He quickly had to retreat on his suggestion to quarantine New York, New Jersey, and Connecticut when New York Governor Andrew Cuomo accused him of violating the constitution.

Accusations of behaving unconstitutionally undercut Trump’s dreams of becoming a great president leading nationalistic Americans into being 'great again'. He watches that greatness disappear in the new global crisis.

The coronavirus sweeps his dreams of becoming a great president, probably greater than George Washington and Abraham Lincoln, down the sewer of self-pride. It exposed the United States as a once great country that lacks a proper public policy.

Since Trump’s home state of New York leads in American coronavirus infections and deaths, he looks beaten, rudderless, and troubled. Reflecting the country that he leads as no longer great, he is like James Buchannan before the Civil War and Herbert Hoover at the onset of the Great Depression.

Being neither Lincoln nor Franklin Delano Roosevelt, he talks “great”, has no capacity to be great, and is symbolic of American lost world and self-greatness.