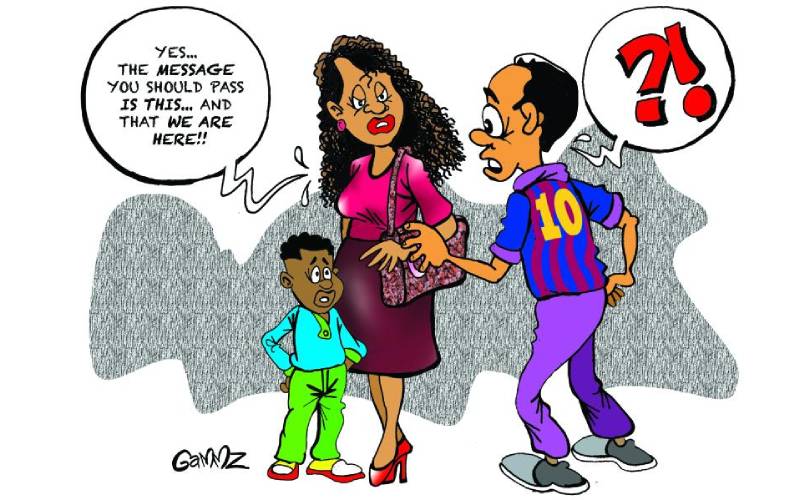 I have known Harold to be a lot of bad things: a careless drunkard, a con pastor, a corrupt village leader, a horrible singer and a lover of avocado, but I have never thought he was a deadbeat dad.

On Monday evening, I was winnowing wheat on his red-grey-black cassock when I noticed a lady hobbling about the gate, searching for a gap to squeeze through. As a good Christian, I dropped my kiondo, which contained the wheat, and rushed to the gate.

Right outside stood one of the loveliest women I have ever seen, flanked by a boy of around 10. She had lush tar-black hair, which fell against her shoulders, which is uncommon in the village. She was in a red top and I could have sworn the material used to make the blouse was the same that was used for the cassock.

“How may I help you?” I asked after a lengthy stare at the boy who, apart from the fact that he was not wearing a cassock, looked quite like Harold.

“Where is he?” she asked, her pupils dilating.

I pointed at the boy. “He is right here.”

I saw the woman’s fist clench and shuddered.

Harold, as usual, had gone to Sue’s den to attack his thirst. I lied to the beautiful stranger, and the boy that Harold had gone to spread the gospel in the farthest corners of the world.

“Do you have a message you feel I should pass to him?” I asked as my impatience was pushed by fear to lofty levels.

“Yes. The message you should pass is this,” she pointed at the boy. “And that’s why we are here.”

I explained the best way I could that Harold could only be reached using smoke signals and drums but she did not budge. She was going to wait.

So we trudged towards the house, talking important little nothings such as if desert locusts should actually be called sandhoppers and if Donald Trump can repair a broken grater and make it great again.

We sat in the living room and over a cup of hot water, the lady, who introduced herself as Clarissa, told me she was the mother to the boy, Paul.

Did the boy, she asked me, remind me of anyone I knew? I shook my head so vigorously she should have known I was lying. She told the boy to eat an avocado that was on the table and when he grabbed it, tore off the peel in a second and then tossed it into his mouth, I knew there and then I could lie no more.

“Yes, you are right. 12 years ago, Harold met me. I had gone out to take some peas to my uncle, and there he was, Harold, with a beautiful car. Right in the middle of the road,” she said.

I held back laughter.

“What was he doing in the middle of the road?”

“He told me he had decided to rest and his car preferred to nap in the middle of the road, as all classy cars do.”

I knew what must have happened. Harold’s sorry jalopy had stalled in the middle of the road and the cunning opportunist used it as a prop in his flirting.

She narrated how she threw her peas in the car boot and got inside the car. Whatever happened in the next few seconds cannot be done justice by words in this story, but when Harold finally left, she knew that things were about to get difficult.

And they did. Ever since, she had tried to track down Harold, she said, through the years asking around and praying earnestly. And finally, her prayer had been answered. She did not tell me exactly how Harold came into the picture but it had something to do with Sue.

She had named the boy Saul until this Damascus moment.

Clarissa was still telling me how she would finish Harold when the voice of a drunkard came calling.

“I travelled, planted and came back home empty handed. One day my harvest will find me,” he sang.

We all grabbed avocados and waited. ?

Games for a holiday cheer

The festive mood is in the air, it is also a busy time for the video game industry with new releases planned.

By Chef Ali Mandhry | 2 days ago