ACK St Philip’s church in Naromoru, Nyeri, bears little semblance to ornate edifices in the UK such as St George’s Chapel in Windsor Castle that was the centre of global attention yesterday.

But the two churches share a history that dates back 70 years ago.

As Prince Philip, the longest serving queen’s consort, was being buried in the royal chapel, the small congregation in Naromoru was reminiscing the royal couple’s visit to their church, named after the prince, on February 2, 1952.

During that much-publicised visit to Kenya, a hitherto little-known lodge, Treetops, became an instant hit when it hosted 27-year-old English princess by the name Elizabeth Alexander Mary, who had just become the Queen of England following the death of her father, King George VI.

In fact, everything around the hotel was catapulted to global fame, as The Telegraph wrote: “The Mugumo tree, a wild fig, was famous; Treetops, the modest safari lodge built in its branches, was transformed instantaneously into the most famous hotel in the world. Even a wretched waterbuck, which was killed by another in a fight witnessed by the royal party, was whisked off to a taxidermist and its head is still to be seen, stuffed, bemused and mounted, in the nearby Outspan Hotel.

More to the point, Kenya and its safaris were anointed overnight with both fame and fashion.”

Everything was famous, except the Anglican Church in Naromoru, where the young couple had attended a morning service, one of the few and perhaps last public engagements in Kenya before hurriedly flying back to England to take up her new duties. She had to cancel the rest of her tour, which included visits to Australia and New Zealand.

David Kariuki wa Gachagua was 24 when Philip and his wife Elizabeth visited their church. 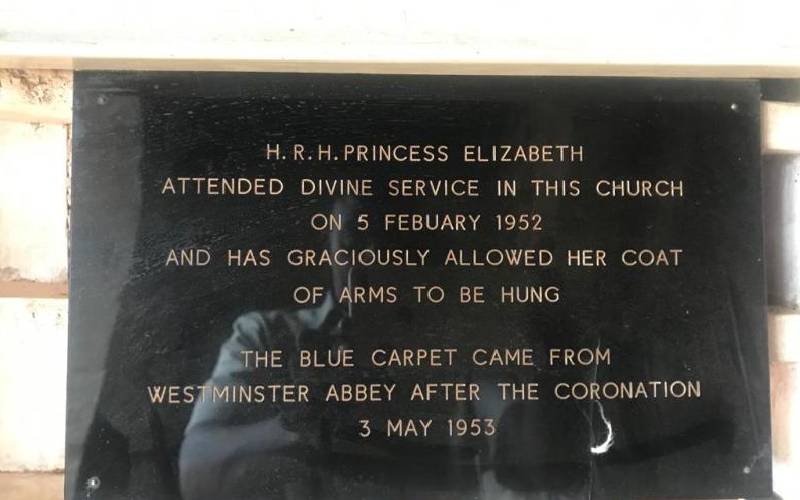 He was not surprised that a young British couple would attend a service in Naromoru.

“I did not speak to Philip but I knew some of the other white men who had accompanied him because we had seen them before. In fact, most of the white settlers around Laikipia and Nyeri would come to Naromoru for service,” says 94-year-old Kariuki.

The couple’s visit came at the height of Kenya’s armed struggle against British rule, and it was ironic that they chose to visit an area that was in the grips of a deadly conflict pitting the Mau Mau freedom fighters and the well-armed British soldiers.

Mzee Kariuki says despite the prevailing adversarial circumstances, the sizable number of settlers around the area acted as a catalyst for most visitors from Britain.

The church, being Anglican, was an automatic choice for the settlers and their many guests. Philip and Elizabeth were no exception. “Most settlers used to worship in this church. It is the white people who contributed to the construction and also developed much of this area,” says Kariuki.

The young lady now had powers over her overseas subjects and among her first declarations was that the royal court of arms be affixed within the church. In addition, the new queen donated the blue carpet that was used during her coronation in 1953 to the church.

The cordial ties between the Naromoru church and Buckingham Palace have continued to the present.

During the queen’s golden jubilee in 2002, the congregants sent a wooden plaque to the queen, a gesture she appreciated via a letter sent from the palace and signed off by the queen’s private secretary, Sir Robin Janvrin: “Her Majesty was delighted to receive this gift and has asked me to send her thanks to all at St Philip’s for their thoughtfulness and generousity.”

Even with bad kidney ailment she still shone

While other KCPE candidates were busy revising and preparing for the national examination, Gahayi was bedridden after her condition worsened.

As the country marches towards the August 2022 elections, politicians’ followers and adversaries see them variously as ‘demi-gods’ or ‘alien monsters’

By Tobias Chanji | 2 days ago