Queen but no castle: Princess who has seen it all

She says her descent into the woes that came to characterise her life started when her prince and husband, Julius Owino or Prince Jully, passed on. Yet, unlike Chinua Achebe’s lead character Okonkwo in ‘Things Fall Apart’ whose world crumbled upon conceding defeat, Benga queen Lilian Auma, popular with her fans as Princess Jully, appears unstoppable.

The songbird says she is not about to give up on a career that for close to two decades has distinguished her as a mentor, bandleader, songwriter and lead singer; not to mention a favourite songbird for many who love the Luo benga genre.

Many admire her enduring spirit that is the secret behind her longevity.

Princess Jully’s evergreen Swahili hit Dunia Mbaya on HIV and Aids awareness brought her wide recognition and has stood the test of time. She says more music is on the way as she seeks to reclaim lost ground.

The songbird says the Dunia Mbaya hit was inspired by the rapid spread of HIV and Aids at the time, and the fact that many victims lived in denial for fear of being discriminated against by society.

The song was influential in the HIV and Aids narrative and has featured in scholarly works on the issue over the years.

But Princess Jully laments that she was never paid by the government or the media that played her song frequently on radio and television. “It is sad that my effort was never appreciated through fiscal reward to enable me lead a decent life,” she rues.

The song became kind of a national theme to music lovers and opened doors, giving her opportunities to perform on many stages. She says this was a life-changing experience.

Hard times and finding her way back

It has not always been smooth sailing, however. After years of flying high, her world came crashing down.

About five years ago, Princess Jully was in the news facing hard times. At the time, The Standard caught up with her living in a two-roomed mud-walled hut in Suna, Migori, after moving back home in 2012 due to what she said were many challenges. She made ends meet by working in gold mines in Migori. 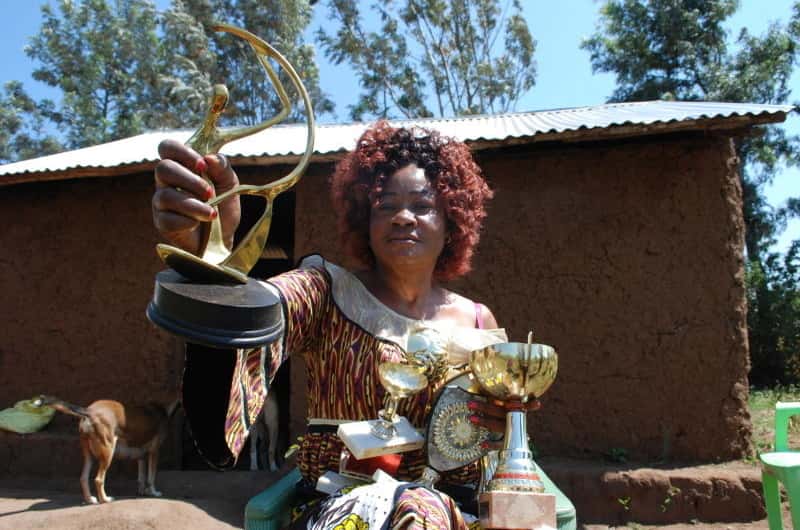 She said then that she moved from paradise to hell when her husband, Benga superstar Prince Jully of Jolly Boys Band, passed on in 1997.

Back to the present, Princess Jully is now based at Deep West Club, where she performs every weekend and says she is grateful for the gift of life.

She says music is everything in her life and there is no turning back. She promises to release new songs in the near future.

“I have plans of refurbishing some of my late husband’s guitars and other musical equipment before I embark on recording new compositions, including a song on coronavirus,” she says.

She believes that the hard times she is going through are meant  to prepare her for better times ahead.

She blames the government for ignoring the plight of musicians.

With 40 albums already under her belt, Princess Jully is in the process of recording a new song titled Doho (polygamy).

The youngest wife in a polygamous marriage, Princess Jully advises wives in such relationships to let their husbands be and cultivate peace with their co-wives.

“Let them emulate Sarah of the Bible who allowed Abraham to sire a child with a maid. Our own Akuku danger had droves of wives who cohabited peacefully,” she says.

She also says that she plans to record a song on coronavirus pandemic. She says though disastrous and particularly devastating to her since it landed in Kenya, coronavirus has kept men at home, allowing them to have quality time with their families.

She says 2020 has been a difficult year because of the pandemic, but was grateful for friends and fans who have helped her wade through it after her son helped her discover social media.

The mother of one found solace in music after she was forced to drop out of primary school due to lack of fees.

Born in Suna, Migori County, five decades ago, Princess Jully says she had the desire to go to a good school and attain high levels of education with the dream of becoming a medical doctor. But this was not to be.

She is, however, happy that her music career turned out well.

The musician, who attended Gina Primary School in Nyaronge, Migori,  says music has been her passion since childhood.

“I used to accompany my elder brother to the farm, among other places, where he taught me the art of music using whatever instruments he came across, including humming different tunes in-between,” recalls Princess Jully, who began her music career at Buscan Club in Mombasa.

She says the luxury and carefree lifestyles among her fans inspired her to compose the Dunia Mbaya hit song.

“Watching my friends and fans die at an alarming rate was heartbreaking,” says the musician.

She says she has managed to keep her husband’s legacy alive through his Jully Boys Band and that she did her best to weather the storm when things were tough, never thinking of giving up on her music career.

Hence her decision to shift base from Nairobi, to live in an uncompleted house at her rural home after things went south.

She says at the time, she tried her hand at many things in the hope that one would work out and keep the wolves from her door.

She tried small-scale farming, gold mining, hawking clothes and selling vegetables and fish as her life took a turn for the worse.

“I thank God for seeing me through. The fact that I have never slept hungry and being able to pay my bills is good enough,” she says.

A go-getter, she says there is no turning back. “This is what I was born to do and I would die for,” she says.

When you’re not the favourite parent

Helping hand: I was on the streets at 11

Getting through the January blues

How the invention of mirrors created our individuality?