Waiting on a prayer 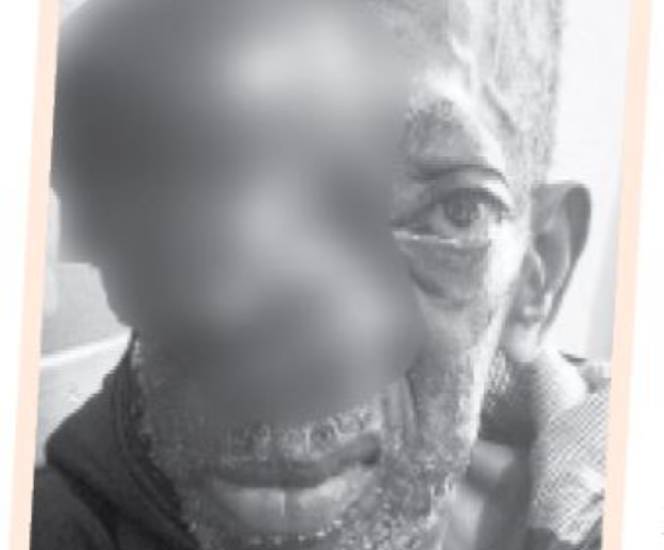 What started as a flu nearly 20 years ago has seen Andrew Zadock visit numerous hospitals with the doctors trying to diagnose a swelling in his nasal cavity. The 65-year-old lives on hope that he will get a reprieve from pain.

I fell sick early 2002 while I was in Kisumu where I sold household items. I had just moved to the town after many years of working on construction sites in Nairobi. I decided to quit the construction job after I fell from a building and sustained injuries that took long to heal.

Back in Kisumu, I was down with what I though was a flu. At first, I took tablets to unblock my nostrils and to ease my cold. But the tablets didn’t help. Since I was not in pain, I continued with my business and kept taking medication for what I thought was flu.For nearly 10 years, I tried to manage my blocked nostrils through herbal medication and self-medication since I wasn’t in pain.

In 2014, my forehead started swelling, down to my eyes, my nose and my mouth. For months, I tried to ignore the swelling until it became painful. I thought my condition was serious when a friend hinted that I might be having a growth on my face. I went the hospital and doctors recommended an x-ray after giving me medication to ease my pain.

Activists making a mark on how counties are run

But those who carried out the x-ray within the facility did not give a proper report that could be interpreted by the doctor. I was frustrated after a lot of back and forth with the doctor and decided to go back to my business without receiving a full diagnosis and treatment.

In March 2018, I went to another hospital in Kisumu, this time with a very swollen face. The right eye was always teary and I felt pressure around my eyes and my forehead because of the swelling. Also, the eye had started to budge out of its socket. I could feel the swelling on the roof of my mouth and in my nasal cavity which made breathing very strenuous.

Doctors conducted a CT scan that revealed that an abnormal mass of cells was growing in my nasal cavity, in the eye sockets and in my mouth. The tests revealed that the tumor was rapidly growing and filling my nasal and oral cavity, thereby obstructing air passage through my nose. The tumor had started eroding some soft tissues in these cavities and between my eyes and in my forehead. In fact, there was a slight penetration of the mass into my frontal bone (bone in the skull).

Doctors diagnosed me with PNS tumor (paranasal sinus tumor) and referred me to Kenyatta National Hospital for further management to kill the abnormal cells. At KNH, I dropped out of the medical process midway when the consultations became a tedious and costly process. Finding no reliable accommodation in Nairobi and without funds to cover the doctors’ visits, I decided to go back to Kisumu.

I feel that I have become a burden to people who are closest to me. I can see it and I feel sorry for them since they have tried all they could to help me. I am in constant pain and I can’t do anything on my own. My only brother who took me in is paralysed and the two of us are usually of little help to each other when my nephew goes to work. I thank God for my nephew who has been my biggest source of strength. And my encouragement to people going through a similar situation, or worse, is to trust in God. I have contemplated suicide countless times but found strength in God that keeps me moving, hoping that help will come soon.

Nasal and paranasal tumours can be noncancerous (benign) or they can be cancerous (malignant).

Genetic mutation that turn normal, healthy cells into abnormal cells. The abnormal cells grow and multiply out of control, and unlike normal cells, they don’t die. They accumulate to form a tumour.

·         Smoking and being around people who are smoking

·         Long-term exposure to chemicals and irritants

They include the following

·         Difficulty breathing through the nose

Diagnosis involves biopsy and imaging tests such as CT scan and an MRI.

It depends on where your tumour is located and what types of cells are involved. Treatment options include the following

·         Radiation therapy that uses high-powered energy, such as X-rays and protons, to kill cancer cells

He had witty comebacks, and profound gems too

While Mzee Moi could be stern, he had his humorous moments, sometimes smack in the middle of a speech.

By Esther Muchene | 17 hours ago

By Ferdinand Mwongela | 17 hours ago