I was better off before kidney transplant 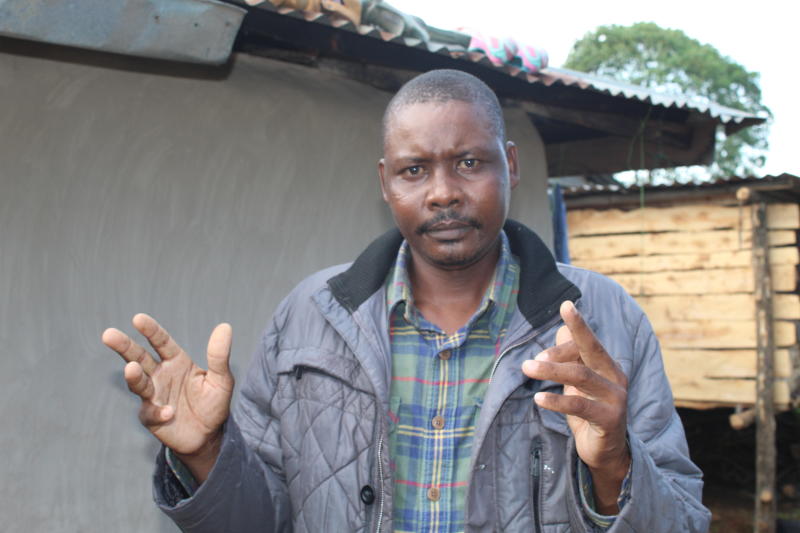 Geoffrey Mutai, a farmer in Kaplong, Bomet County, has been battling kidney disease since 2015.

I was diagnosed with kidney disease in July 2015. One day, I checked into Kaplong Mission Hospital in Bomet with a swollen face, hands and legs. I also had excruciating pain in my lower abdomen and in my waist. Blood tests revealed I had a kidney disease. At the same time, medics found out my blood pressure was high.

It was the first time I remember being in hospital. I don’t think I had ever been so sick that I had to go to hospital. So, the news that my kidneys were failing shocked me. But what hit me most was the task that lay before me of finding someone who would be willing to donate one of their kidneys to me. It was obvious that at some point, I would need an organ transplant. I went through a short counselling session at the hospital and went home feeling a lot better. At Kaplong Mission Hospital, I was referred to a physician who I was to see every Tuesday. My physician who worked at Kericho County Hospital booked me in. I was admitted for two weeks.

I left the hospital at the end of the two weeks, feeling a lot better. The pain and swelling subsided and in a few days, I went back to my daily activities. I was away from medication the whole of 2016 tending to my farm. But come mid-2017, the symptoms came back. I went back to the hospital where I was referred for dialysis.

All are set for Chemususu Half Marathon

When your kidney ails

With no money for dialysis, I went back home and resorted to using traditional medicine which helped in easing my pain. But I went back to hospital last year in April with a swollen body. This time, my whole body was swollen and I could barely do anything at home. The pain in my lower abdomen and waist had also worsened. This time, the hospital in Kaplong referred me to Moi Teaching and Referral Hospital (MTRH) in Eldoret where I was required to pay Sh20,000 to be fitted with the dialysis line.

Fresh tests at MTRH before the dialysis revealed that my condition was way beyond salvaging by just dialysis. Doctors at the hospital told me that both my kidneys were failing and that I had lived the condition for many years. They explained that one kidney had failed completely and the other was also failing at a fast rate. They recommended emergency organ transplant. Then it dawned on me that I had very little time to get a donor and the Sh300,000 for tests.

Fortunately, my younger brother emerged a perfect match for the transplant. Friends also came through for me and after numerous fundraisers, my family raised the required amount for the tests that were done in various medical facilities in Eldoret and in Nairobi. Samples of my blood and that of my brother were also taken to South Africa for analysis.

I was booked at MTRH where I underwent a successful kidney transplant in May. I left the hospital happy that my life was no longer in danger. But I was horrified that the surgery had pegged me to an expensive life I wasn’t sure I would afford. Doctors prescribed a variety of drugs which cost more than Sh50,000 a month. So far, I have been relying on donations from friends to buy the medicines. The thought that this is how I will live for the rest of my life scares me. But doctors have assured me that I may drop certain drugs along the way so it won’t be expensive.

I was also instructed not to lift heavy objects. This has kept me away from farming which I enjoyed while I was healthy.

With all these adjustments, including changes on my diet, I sometimes think I was better off before the transplant. At least, I could work on my farm and earn a living. I also wear a face mask all day to avoid infections. Getting sick with a new organ is dangerous because the body’s immunity system can attack the organ as an invader in the body. I only remove the mask when eating and when I have to talk to people. This isn’t fun.

I am glad that I have a supportive family around me including my brother Wesley Mutai, who donated his kidney to me, and my wife who ensures that I keep off all plant proteins and bananas as the doctors instructed.

Adjusting to life after a kidney transplant

A kidney transplant is done to place a healthy kidney from a donor into a person whose kidneys no longer function properly. Normally, the work of the kidneys is to filter and remove waste, minerals and fluid from the blood by producing urine. The kidney is surgically placed when it loses about 90 per cent of its ability to function properly, a condition referred to as end-stage renal disease or simply, kidney failure.

·         Infections or diseases that can be transmitted with the donated kidney

·         Keeping to doctors’ appointments for checkups

By Kirsten Kanja | 20 hours ago