Streams of milk but no honey 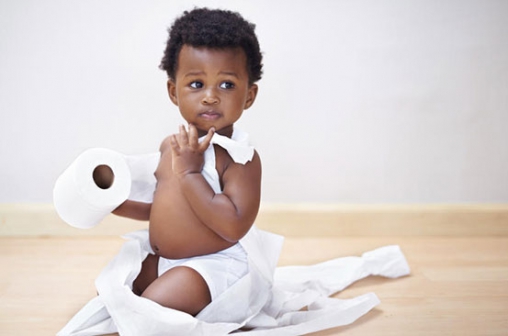 The world as I have known it has come to an end. Where peace once flowed like a river, there are now streams of milk.

There would have been honey, but the honey is still way beyond Adoti’s reach.

She is not too bothered about that because she has discovered the fridge. A wonderland filled will “spoilables” and “spillables.”

So far, milk is her favourite. She spills it on the floor and tries to swim in it.

And when she is done swimming in shallow ‘waters’ she runs around the house, leaving a milky trail in her wake. If you happen to catch her in the act, she yells, “Oh, wow!!” spinning around in circles like a bottle top, literally dripping with delight.

If you look like you are not about to join her little milk party, she dashes to the kitchen to retrieve the packet, and hands it to you as if that somehow makes it alright.

The other day I said to Nanny Lucy, I said, “Heh. But si you’ve put a lot of oil on Adoti’s face this morning.”

I was carrying the girl child at the time, so I turned to her and I said, “Haiya! Adoti, kumbe you’ve put butter on your face?!”

She looked me dead in the face and said, “Yah! Okay!”

“Okay” is her favourite word. She says it to everything.

I might be telling her to stop jumping up and down on the bed and she will say, “Okay!” but continue jumping. Sometimes she will yank a handful of tissue off the roll, open the lid of the toilet and point at the bowl. She will look at me with an expectant look on her face, pretending that she is asking permission to throw perfectly good tissue down the loo.

I’ll say to her, “Ah-ah, no, no Adoti! Don’t throw that tissue in the loo!” And she will go, “Yah! Okay!” before proceeding to do just that.

Mama’s “no!” means nothing to the sassy, lil’ miss but her “Yah! Okay!” always means yes. She is like a little bulldozer, flattening every obstacle in her path. When I am not restraining myself from sending her to a baby boarding school, I am truly proud of my girl. She has got heart.

We have reached  the stage where she can string a few words together so when I get home, she receives me at the door with a hearty, “Hi Mum!” Sometimes it’s a “Hi Ma-mee!”

Whichever it is, it is always loud and boisterous. Life continues to be consumed with a big spoon in our household.

I asked Nanny Lucy how the child had learned to differentiate ‘hi’ from ‘bye’ and she told me that she is learning from our neighbours and their children. She gets a lot of ‘hi’s’ and ‘byes’ from the mummies when they see her downstairs.

Her friend Briana nicknamed her Doh-tee, and I can often hear the children calling out her name as they play. It is an interesting feeling to see your child interact with other children.

There is such a sense of pride that they are taking on the world on their own terms but at the same time, you want to protect them.

I have to restrain myself from intervening when I feel like the other children are not being fair to Adoti. There is this one child who likes to play on her own, which I can understand being an introvert myself. But the thing is she wants to have all the toys to herself too.

So I will see Adoti trying to pry a ball from this girl’s hands and find myself on my feet ready to start a fight with a two-and-a-half-year old.

I console myself with the thought that it is a natural instinct to come to your child’s defence even if her perceived attacker weighs about 12 kilogrammes and is about two feet tall.When I was in the labour ward, believing that I would be the first woman to die of pain, my sister told me that once I saw the baby, the agony of childbirth would be forgotten.

“God plays a trick,” she said, “You wait and see. The baby will make up for everything.”

She was right. The minute I set eyes on Adoti, I forgave the universe for foisting the labour of life on the so-called weaker sex. She made everything alright.

And she continues to do so, even when she is just taken a milk shower and still seems to think that everything is, “Okay!”

The just concluded third annual devolution conference in Meru provided governors an avenue to show case strides made in their counties.

By Stevens Muendo | 11 hours ago