By Boniface Mithika | 2mos ago 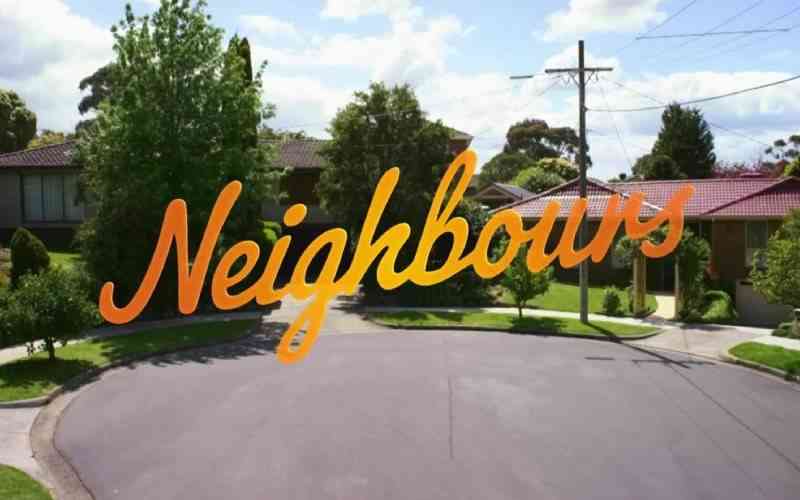 In the 1990s Katherine Kelly Lang’s character, Brooke Logan strode through Kenyan living rooms in The Bold and The Beautiful. Soaps were few.

But on the first, and for a time only, private TV station KTN, Brooke over at KBC had neighbours across the fence, the show Neighbours.

The journey for KTN started in 1990 when the station made history by becoming the first free-to-air privately owned television network in Africa and the first to break the monopoly of the national broadcaster, KBC.

The new station broke new barriers by airing content for 24 hours. The content was also unique because, even though a common staple nowadays, soaps were few and far in between at the time. One such soap was Neighbours.

This year, on March 3, it was confirmed that after 37 years, nearly 9,000 episodes, 63 weddings, 20 births and 68 deaths, the hugely popular Australian soap opera will be coming to an end, with the finale set for August 1.

The dramatic story of Neighbours started on March 18, 1985, with three families - the Ramsays, the Robinsons and the Clarkes - who all lived and worked in Erinsborough, a fictional suburb of Melbourne.

Over the years, the show has brought in new and younger actors and many more families, including the Bishops, Scully, Hancocks and the Willis. Only one original cast member is still on the show, Stefan Dennis, who plays neighbourhood villain Paul Robinson.

The series centres on the residents of Ramsay Street, an idyllic cul-de-sac set somewhere in Melbourne’s east and its neighbouring area. The houses featured on ‘Ramsay Street’ are real and the residents allow production to shoot external scenes in their yards. The interior scenes are, however, filmed in a studio.

Locally, the drama series became a hit with Nairobi residents and throughout the mid-90s when it aired on KTN, many rushed home to watch the episodes that aired at 6.30 pm from Monday to Friday. (Those who missed out on the weekday shows tuned in on Sundays for the reruns.)

The pinnacle of this Kenyan-Aussie newfound long-distance relationship was in 1995 when veteran actor Mumbi Kaigwa featured in the drama series.

“I played Racheal, a Maasai woman who works for World Vision and in Australia, they had a real-life scenario where people from World Vision were educated. My storyline was I was one of the people they had rescued and educated and now I worked for World Vision,” she says.

The celebrated actor who has also featured in films and television productions, such as Asha, The Knife Grinder’s Tale, The Constant Gardener, The First Grader and The System among many others admits it is not always that one gets a chance to work with international professionals.

“It was a wonderful experience working with a team of foreign professionals who were very supportive and coached me as an actor,” she says.

Mumbi appeared in 10 episodes, which were filmed here in Kenya, some in Nairobi and some in Amboseli.

Premium When 'Jah' reference was declared devil worship in schools
National
By Nzau Musau
1 hr ago
Standard Group, matatu owners in deal to give passengers access to newspapers
Business
By Esther Dianah
1 hr ago
Wanyama set to leave Major Soccer League side CF Montreal
Football
By Mike Kihaki
1 hr ago
Some of the family businesses that have collapsed in Kenya
Money & Market
By Standard Checkpoint
2 hrs ago
.