They rule Kenya’s basketball airwaves like colossus, and when it comes to football they are unmatched.

Equity Bank Hawks trio of Samba Mjomba, Betty Kananu and Brenda Ngaira have proved to all and sundry that they are a multi-talented lot at the ongoing 36th edition of Kenya Institute of Bankers Interbank Sports in Nairobi.

The three musketeers have perfectly steered their side to a back to back women’s football victory in the Games.

Equity Bank has successfully defended the women’s football trophy without conceding a goal. They won their opening match 3-0 against Co-Op Bank, 2-0 against Central Bank of Kenya (CBK), 3-0 against University of Nairobi (UON) Business School, 10-0 against KCB Bank and 7-0 against I&M Bank.

Equity were poised to take on Absa Bank at the latter’s venue in Ruaraka on yesterday evening, but just as a formality as the cup has been successfully retained in their stable.

Ngaira leads the golden boot race with 13 goals, this includes a hattrick notched in the 10-0 demolition of KCB Bank. Mjomba and Kananu also netted a hattrick in that one sided encounter.

“Returning to the football field after a very long time feels like home, football was my first love, its circumstances that forced me to embrace basketball while in Form 2,” Mjomba told Standard Sports.

The lethal left winger so far has five goals in the tournament; a hattrick against KCB and a goal each against CBK and I&M Bank.

“We are glad that Equity management have put us in a residential camp, we were also given a two weeks grace period from job just to train and prepare for this tournament,” said Mjomba, who features as a point guard for Equity Hawks in the Kenya Basketball Federation League.

The Equity Bank Internet Banking relationship manager said transition to football was not difficult for them because of the rigorous and endurance training they do in basketball all throughout the year.

Just like Mjomba, Ngaira too played football in childhood but embraced basketball after high school after realising the game had potential to take her far and open more opportunities in life.

She attributed her goal scoring prowess to team work in their squad.

“The drill is they feed me with the ball and my work is to take it at the back of the net,” Ngaira explained.

Unlike Ngaira and Mjomba, Kananu is engaging in football for the first time and she attributed her good coordination on the pitch to her athleticism gained from years of playing basketball as a power forward. 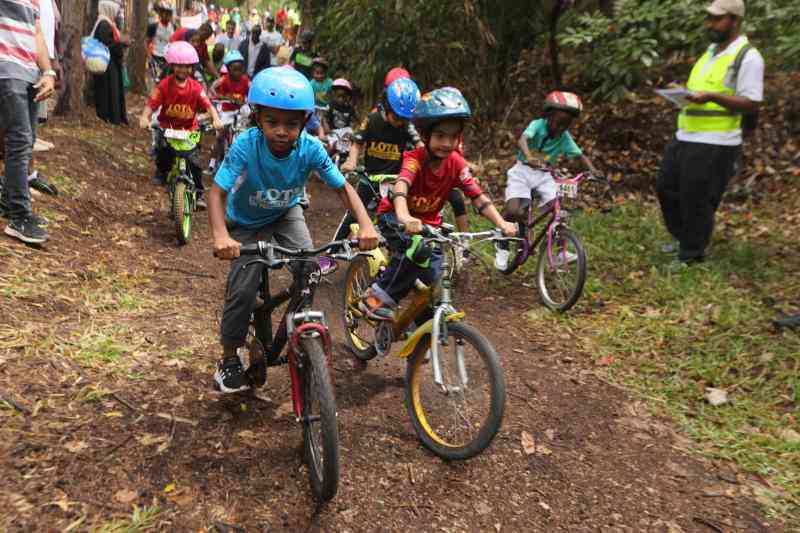