As Kenyans are coming to terms with the sudden death of the former Kenya Sevens and rugby legend and coach Benjamin Ayimba, it has been revealed he had a great intention to build an age grading rugby academy in the Nyanza region.

While revealing his (Ayimba) plans for Nyanza region in rugby development, Kenya Lionesses head coach Felix Oloo said the fallen hero had started engaging him to commence the inauguration of the academy that could tap talents at the grassroots from the home of rugby in Western Kenya.

Oloo said Ayimba had the intention of having an academy in Western Kenya similar to the ones at Nakuru Athletic Club and Impala Club in Nairobi.

“That was his aspiration and ambition soon after he retired from the national duties and we were to partner together in the whole process of having the matter come to fruition,” Oloo told The Standard Sports while mourning the fallen legend.

“He was a real coach who faced issues head-on and had his own ways of solving matters within players that resulted in the playing unit playing for him,” Oloo who is a former Kenyan international said.

As he leads Kenya Lionesses to the 2020 Tokyo Olympics, Oloo said he would like to emulate the fallen legend in his footsteps that led Kenya to win the first ever global sevens title in Singapore Sevens in 2016.

“He was my mentor and with my appointment at the national level, it is my desire to follow his footsteps to ensure the women’s team bags a global title under my armpit,” he stated.

He said he had the privilege to play alongside Ayimba at the national team at the global level before he later became his tactician years later. 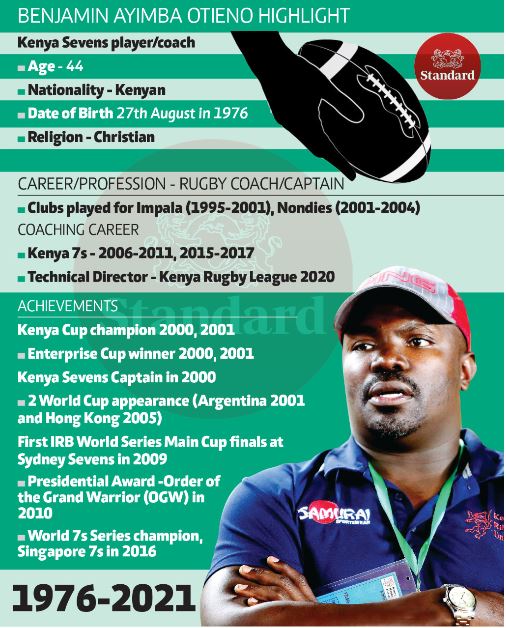