World Cup history is full of memorable David versus Goliath wins, dramatic comebacks, and defending champions suffering embarrassing defeats, as tournament dreams are made and broken.

As the 2022 FIFA World Cup in Qatar enters the third day, many expect more stories to be written

On Tuesday, football fans across the globe witnessed history after Saudi Arabia scored one of the biggest World Cup upsets ever by beating Lionel Messi’s Argentina 2-1.

Saudi Arabia, who are the second lowest-ranked side in the World Cup held on to beat one of the favorites - who were last defeated 36 games and three years ago.

Messi’s quest to win the one major title to elude him got off to a shocking start and brought back memories of Cameroon’s 1-0 win over an Argentina team led by Diego Maradona in the opening game of the 1990 World Cup.

Goals by Saleh Alshehri and Salem Aldawsari in a five-minute span in the second half gave the Saudis their greatest win. Messi rolled in a penalty to give Argentina a 10th-minute lead.

Saudi Arabia's remarkable upset of Argentina at the start of the 2022 FIFA World Cup was the latest, and one of the greatest, examples of a smaller nation completing a huge shock on the global stage.

And after the shocking result which is still and will continue to grab headlines for many years in the history of Saudi Arabian football, The Standard Sports looks at some of the biggest upsets ever in World Cup;

1.    Senegal 1-0 France (2002): Holders Les Bleus stunned
The curse of the defending champions haunted current holders France 20 years ago when current African champions Senegal who were playing in their first World Cup shocked the heavyweights 1-0 at South Korea and Japan co-hosted the event.
Papa Bouba Diop emerged as the hero of the game as Les Bleus struggled despite the talents of Thierry Henry and Patrick Vieira and the absence of Zinedine Zidane in their opener.
Senegal took full advantage of France's stage fright. to announce themselves on the World Cup stage.

2.    Cameroon 1-0 Argentina (1990)
Defending champions Argentina arrived at Italia '90 looking to win a third title in 12 years and become only the third side to defend the World Cup.
This is behind their Diego Maradona-inspired victory at the 1986 tournament in Mexico.
However, not even Maradona was able to prevent Cameroon's 'Indomitable Lions' from pulling off a huge upset.
Cameroon were aiming to build on a poor World Cup debut in 1982, and they sucker-punched an off-form Argentina in Milan, as François Omam-Biyik netted a late winner.
Valery Nepomnyashchy's side were eventually knocked out by England in the last eight, as they broke new ground for African nations at the World Cup.

3.     Algeria 2-1 West Germany (1982)
Algeria arrived at the World Cup finals in Spain as rank outsiders, the north African side playing in its first-ever World Cup.
But goals from Rabah Madjer and Lakhdar Belloumi either side of a Karl-Heinz Rummenigge goal secured a famous victory.
Algeria's tournament would end in heartbreak however with the infamous "Disgrace of Gijon" when West Germany beat Austria 1-0 in a mutually beneficial result that sent both teams through to the second round.

4.    Italy 3-2 Brazil (1982)
Brazil looked destined to end their 12-year wait to win the World Cup as the Samba Boys headed to Spain in 1982.
Socrates and Zico were the inspiration for Telê Santana's side, but despite a 100% record in their opening four games, they were picked off by Italy in the second round.
Paolo Rossi turned in one of the greatest individual World Cup performances, with a ruthless hat trick, to dump Brazil out and inspire his side to glory in the final.

5.    USA 1-0 England (1950)
England arrived in Brazil as one of the tournament favorites after electing to play in the World Cup for the first time.
But England's status as one of football's superpowers was destroyed by a rag-tag band of players representing the United States, Joe Gaetjens scoring the winning goal that sealed victory in Belo Horizonte 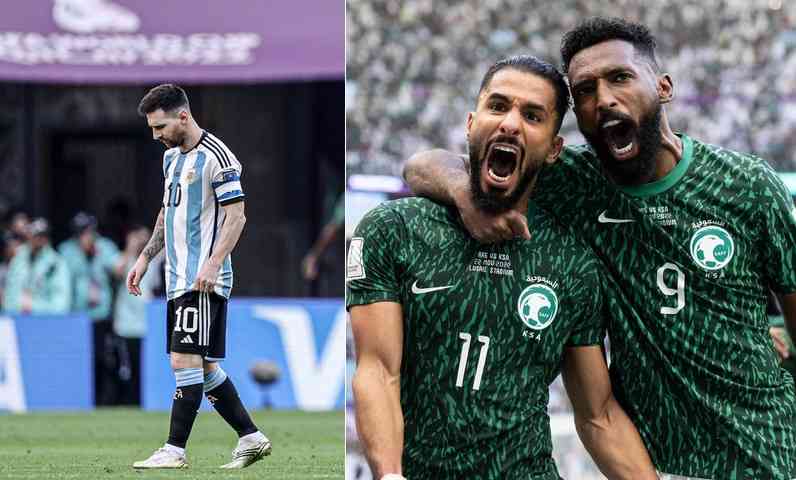