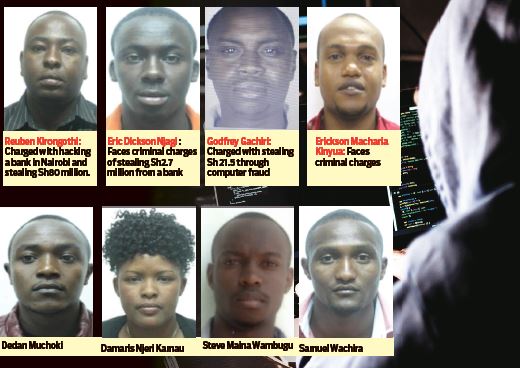 Four of the eight Kenyans detained in Rwanda over an attempt to hack a bank have pending cases of hacking into banks and stealing more than Sh100 million.

The four have been identified as Reuben Mwangi Kirongothi a former IT staff at a local bank who was charged with hacking a bank in Nairobi and stealing Sh80 million.

The criminal charges are pending before a magistrate court. He reportedly failed to appear in court on November 1 when the matter came up for hearing.

Eric Dickson Njagi is facing criminal charges of stealing Sh2.7 million from a bank through false accounting. The matter is pending in court.

A third suspect Godfrey Gachiri was in 2016 charged with stealing Sh 21.5 through computer fraud. The funds were recovered and and the criminal charges against him dropped by the bank on June 24, 2016.

The fourth suspect facing criminal charges is Erickson Macharia Kinyua. This is according to a report from the DCI Banking Fraud Unit investigators.

Yesterday, Rwandan investigators revealed the identities of the eight Kenyans who are being held in Kigali over the attempt to hack Equity Bank Rwanda branch.

According to the report, the suspects who are tech-savvy exploit weak points within the bank systems to steal money.

The banking fraud unit has profiled young IT experts aged 27 and below, as major suspects in cyber-crime cases.

The suspects are tech savvy and the banking sector has had to up the game by employing IT gurus.

Following the rise in cyber fraud, Central Bank has issued a new policy that will require banks to report cases of cybercrime in real time.

The regulation that came into place last month, requires banks and mobile money firms to report to CBK cyber-crime within two hours after the incident.

Companies with systems that clear huge amounts such as bank-to-bank transfers have also been instructed to immediately file reports with CBK. Statistics from the DCI banking Fraud Unit revealed that suspects involved in cases of electronic fraud are university graduates with IT background.