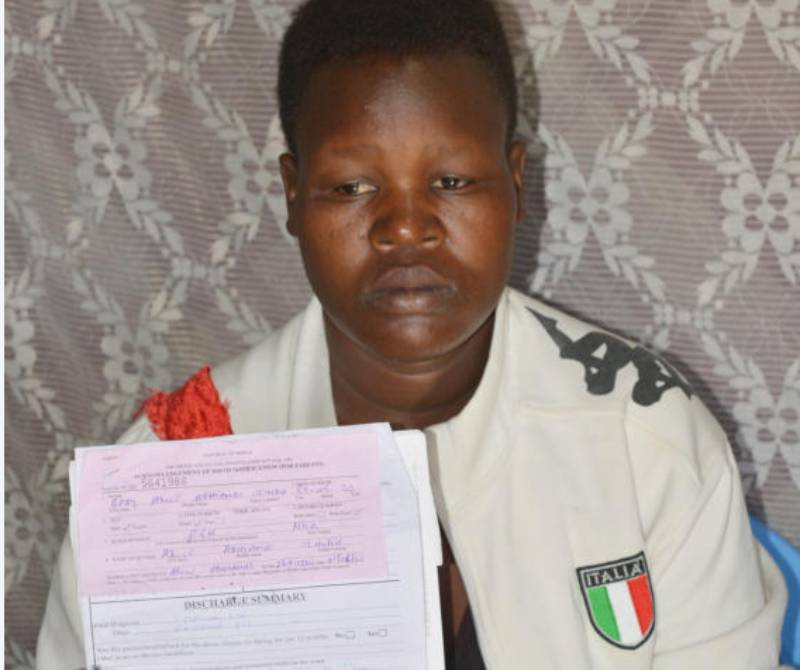 A woman has accused Nakuru Level Five Hospital of swapping her newborn with a dead one.

Alice Adhiambo (pictured), 31, said she checked into the facility on May 21 and was admitted after medics reported that she had high blood pressure, thereby placing her and her unborn baby in danger.

"I remained at the hospital until May 29 when I delivered at around 4pm through caesarean section. My baby boy weighed 2.6 kilogrammes at birth and was feeding normally. I spent the day with him on Saturday and Sunday," said Adhiambo.

Details on the Newborn Unit Exit Form indicated that "the child was born pre-term at 31 weeks and 5 days as compared to 40 weeks for a normal delivery."

Adhiambo explained that on Sunday evening, she went to breastfeed her child at 6pm and left the nursery at around 7:30pm hoping to check on the baby again by 9pm.

"At 9pm, I left my bed heading to the nursery. There I met two nurses who asked me where the name tag on my child had gone yet I had left it intact. My baby too was not in his bed," she said.

The distressed mother said the nurses then broke the news to her that her child had died after which she demanded to see the body.

"My child had unique hair close to the forehead. I was shown an already wrapped baby whose body colour had turned almost green. The dead child had a birth mark on the face while mine had none. The body was too cold to have died minutes earlier," said Adhiambo.

Her attempts to get an explanation on the circumstances under which her baby died were futile as none of the nurses had answers to her queries.

"There was nothing like a baby swap. The document in our possession clearly show that the child was born pre-term,” Dr Mburu said.

The situation became more complicated the following day as Adhiambo was paying her bill when it emerged that she had been given a different file as a record for her child.

On the Discharge Summary Form given to Adhiambo, her patient number was recorded as 792173 but at the hospital billing records the number had been assigned to a different patient.

"At the accountant's desk, the patient number on the form gave the record of a patient named John Ng'ang'a. That was neither me nor my son," she said.

Dr Mburu admitted that there were some errors on the records but the inpatient number belonged to Adhiambo.

“If the child was not hers, we shall have a DNA conducted to establish the truth of the matter,” said Dr Mburu.

More discrepancies emerged between the birth notification and a burial permit issued to allow the hospital to dispose of the body.

In the two documents seen by The Standard, the Birth Notification issued on June 1 indicates that the child was born dead on May 29 while the burial permit indicated the child died aged one day.

Adhiambo who works as a security guard in Nakuru town said the torment has been hard for her to bear adding that her husband is still held up in Mombasa due to cessation of movement because of the Covid-19 pandemic.

ODM leader and Uhuru have secured a vantage position from where they will run succession politics.