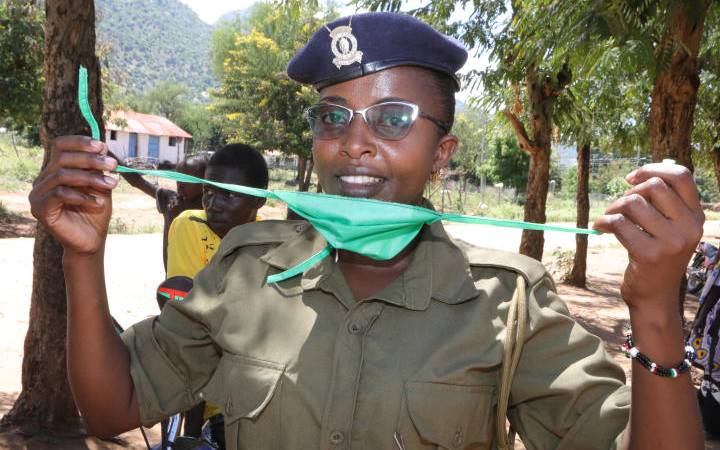 Amid the gloom and uncertainty caused by coronavirus, Caroline Makena (pictured), a police constable based at Tot Police Station in Elgeyo Marakwet has chosen to be the reason residents look forward to brighter days ahead.

Makena, 29, juggles between her police duties and sewing masks, which she gives out to residents for free.

For the last two weeks, the officer who was posted to the station in 2016 has been sewing masks that are later distributed to Marakwet East residents.

Makena said she started making the masks after realising most of the residents were not putting them on because they were either too expensive to afford or were not available, especially in the villages far from town.

"This is my way of giving back to the society and I am glad it is helping. I acquired tailoring skills at the National Youth Service where I went through before joining the force, and since I had a sewing machine, I thought why not help people in such crucial times," she noted.

Her colleagues are also benefiting from her kind gesture.

Currently, she is producing 50 face masks daily as she is buying the materials out of her pocket.

Having combed the town in search of a mask for her own use as soon as the government announced it was mandatory to wear one in public, she was forced to send for one in Eldoret, which is about 140 kilometres away. This also inspired her to start making the masks for the residents.

Hassan Kiptoo said the first time Makena went to distribute the masks, the residents thought she was out to arrest those not wearing them only to realise her mission was totally different.

“We thank Madam Makena for her kind gesture. We didn't know we could get such help, especially from a police officer," said Kiptoo.

Area Assistant County Commissioner Linus Kotut thanked Makena for going out of her way to help the residents.

“Access to face masks has been a big challenge. Priority has been given to health workers so seeing someone taking the initiative to help in such difficult times is a great gesture," area Public Health officer Jennifer Chelang’a said.

Ms Chelang’s also urged other tailors across the region to embark on production of cheap cloth masks, which are also reusable.

This is not the first time Makena has gone out of her way to help the society. Until last month, together with her colleagues at the post, they have been going around schools in Kerio Valley, giving lessons on reproductive health, sexual offences and gender-based violence.

By James Munyeki | 18 minutes ago

By Peterson Githaiga | 9 hours ago

By Edward Kosut | 21 hours ago