'Who is the Moi of Uganda?' Moi's first grandson gives emotional tribute 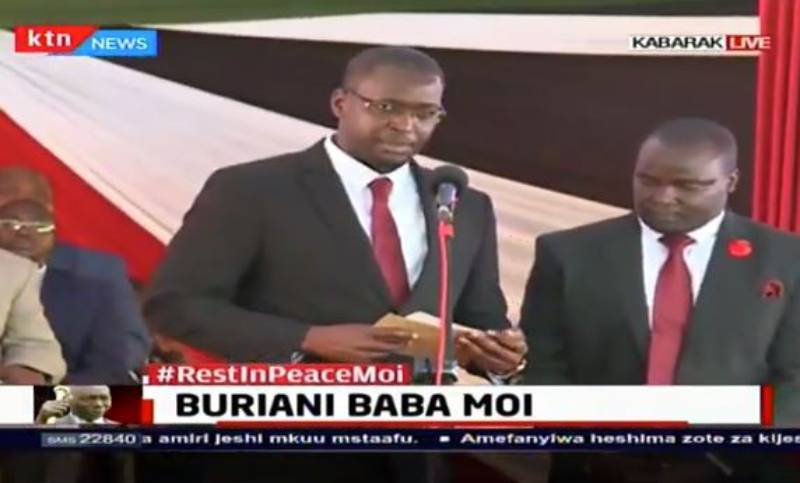 Retired President Daniel Moi’s first grandson Clint Kiprono Moi has given an emotional tribute to his grandfather. He was speaking during Moi's funeral service at Kabarak University Grounds.

Clint is the son of the late Jonathan Moi, the eldest son of Mzee Moi. Jonathan died in April 2019.

“I find myself in a state of mixed emotions as I pay tribute to my grandfather,” he started.

To Clint, besides Moi being a statesman, “He was a man of such great stature that the name Moi was synonymous with president.”

He recalled when he was younger, a common joke among his peers was, “Moi wa Uganda ni nani? (Who is the Moi of Uganda?)”

For a man who was many things to many people, a leader, environmentalist, mentor and educationalist; to Clint, Moi was simply a grandfather.

He told mourners how he feels immensely privileged to be Mzee Moi’s first grandson.

Memories from a first grandchild

“For us his grandchildren, he instilled the importance of having ambition, focus, humility and above all the love of Christ who is the purveyor of all wisdom,” he said.

Clint was thankful to the people of Baringo, “I want to thank you for gifting Mzee Moi to my family and to the world. We could not have experienced his greatness without your support.”

In his quest as an educationalist, Clint said, Moi understood that education is a great equalizer and wielded it as a powerful tool to empower Kenyans.

“I’m happy in the faith that you are together in heaven with Christ and also together with my late grandmother Lena, with my late father Jonathan and with our late cousin Kiprono,” he concluded amid tears from a section of mourners who were present.

Mourners filled the Kabarak grounds at the crack of dawn ahead of the sendoff of Kenya’s longest-serving president.

The helicopter carrying Mzee Moi’s body landed at Kabarak airstrip at around 8.40am. The flag-draped casket was offloaded from the gun carriage and gently wheeled to repose.

The service was televised on screens at Afraha Stadium in Nakuru, Moi’s ancestral home in Sacho and Kabarnet town in Baringo County.

Contingents of regular and Administration Police, the General Service Unit and the Kenya Defence Forces were deployed to maintain law and order.

Megan Rapinoe among nominees for BBC women's player of the year

Megan Rapinoe of the United States' World Cup-winning side, were named among the five nominees for the BBC Women's...