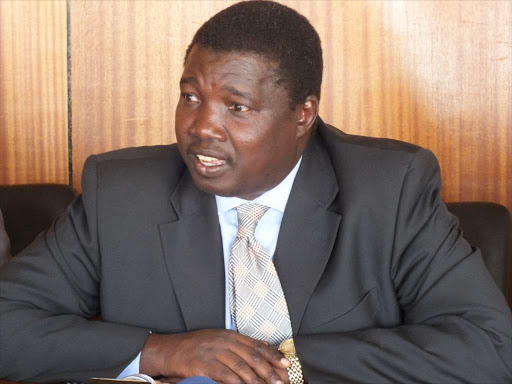 The High Court in Eldoret has dismissed a petition by former Kerio Valley Development Authority (KVDA) Managing Director David Kimosop (pictured), paving way for the appointment of a new boss.

The court on Friday also quashed another petition seeking to nullify the ongoing process by the board to recruit a new CEO.

Mr Kimosop was seeking Sh46 million as compensation for wrongful dismissal, whereas the other petitioner was questioning the recruitment process.

The former MD’s case was dismissed on the grounds the he had served more than two terms, while the other case lacked merit.

In November, after interviewing 11 candidates, the KVDA board forwarded three names, including acting MD Sammy Naporos with 83 points, to the Cabinet Secretary for East African Community and Regional Development, Adan Mohamed, for consideration.

The other two are Fred Kibet Oloibe, the head of Strategy and Business Development at the Kenya Seed Company who got 82 points, and Chris Kibett (73 points). Naporos is the CEO of Ewaso Ng’iro Development Authority.

Nandi Senator Samson Cherargei and Marakwet East MP Kangogo Bowen urged the CS to give priority to a local, given that Naporos was already a substantive MD of Ewaso Ng’iro South Development Authority.

“What is the point in appointing a person who is a substantive MD elsewhere? We should give the opportunity to other people and preferably someone from the region,” Mr Cherargei said.

Lack of a substantive MD has affected operations at the KVDA.

According to a staff who sought anonymity, the workers morale was low while produce of farmers in Elgeyo Marakwet and Pokot is rotting in the farm without the intervention of KVDA management.

Locals have claimed that the acting MD was inaccessible and favours people outside the Authority’s jurisdiction.

“A case in point is a service provider who had been with the company for the past 12 years with a good performance record. Mr Naporos failed to renew their contract opting for a firm from Kajiado County,” claimed the staff.

A processing machine installed by KVDA in 2018 is gathering dust as mango farmers rely on middle men from Nairobi and other regions.

The Sh100 million plant was built during Kimosop’s tenure. “The factory has been deserted for more than a year now. Equipment was installed and later abandoned and no one is explaining why it is not operational,” said Wilson Kiptoo, a mango farmer.

The farmers have been selling their mango fruits at about Sh300 per bag. But, Naporos defended the project and said the agency is awaiting certification from the Kenya Bureau of Standards before commencing commercial processing.

“We have delayed the processing because of compliance issues. We are also engaging in crafting mangoes in a bid to enable farmers produce quality mangoes.