Jane Kiptui is troubled. Her newly constructed fence and her maize farm have been trampled on by elephants in their annual migratory route from Laikipia through to Timboroa.

Like her neighbours, the phenomenon is not new. Every year during the June and July short rains, the jumbos migrating from Laikipia often pass by the specific ridge in Timboroa in their annual ‘expedition’.

“It is a sight to behold, they never miss. Almost every year they pass by here but in this year’s journey, they roamed the expansive area for days. They seemed lost,” Kiptui says.

Last week, the group of five elephants made their grand entry into the region from Laikipia through to Mochongoi-Lake Bogoria-Lembus Forest-Timboroa, before being driven back to Laikipia.

Raphael Kimosop, an environmental officer in Baringo County, says the elephants have unique migratory corridors, which they often pass through during a particular season of the year. Although some of the routes are blocked, he says the elephants have memories spanning decades and often use ancient routes to access their destinations.

“Most of the locals know particular times when elephants are passing by because they have unique traditional routes. However, settlements are coming up to take over these corridors, resulting in human-wildlife conflict,” says Kimosop.

“Elephants have two known migratory routes in Baringo. They sometimes migrate from Laikipia through Mochongoi to Lake Bogoria to Cheploch Gorge back to Lake Bogoria and finally to Samburu.”

Another rare phenomenon, he says, is the lions’ migratory route that transverses Laikipia-Arabal-Kipngochoch-Lake Bogoria and back to Laikipia. 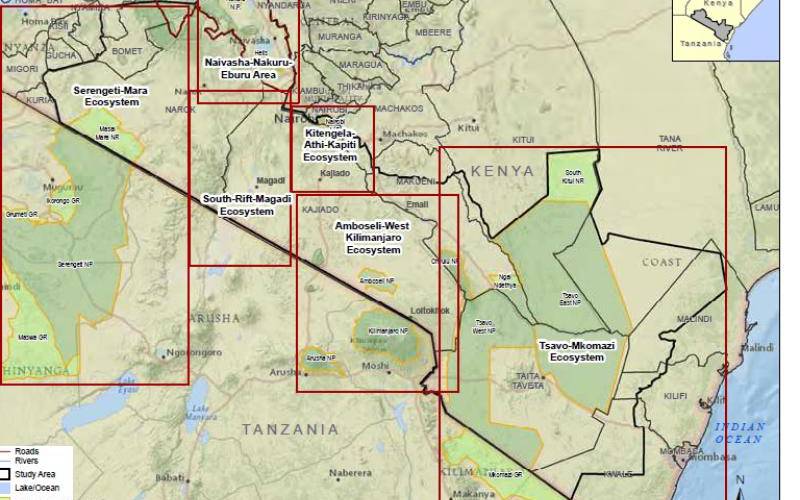 Kimosop says the migratory routes are critical for wildlife dispersal to access vital resources such as pasture, water, breeding grounds and to reduce the risks of predation. He says migratory corridors connect core habitats and are critical for species’ survival and long-term viability of ecosystems.

While migratory phenomenon remains a unique sight, data reveals that most mapped migratory routes are already blocked and entirely taken over by settlements, fences and expansion of farming areas in former wildlife dispersal areas.

“In the wake of straying wildlife in to their former dispersal areas lies a bigger picture. Former human-livestock-wildlife routes have all been blocked because the initial planning for settlements did not consider traditional migratory corridors in the map,” says William Kimosop, the North Rift Tourism Coordinator.

William says the challenges emanating from blocked routes have also continued to escalate human-wildlife conflicts, poaching and decline in populations of species that traditionally migrated.

The mapping was done in 2017 with an aim of securing wildlife migratory routes and corridors across the country. The most affected species whose migratory routes have been interfered with include the elephants, wildebeest, Burchell’s zebra, Grevy’s zebra, giraffe, buffalo, topi and oryx.

The migratory corridors and dispersal areas are mainly found in human- and livestock-dominated landscape.

In the Southern Kenya rangelands, 17 corridors were mapped in the Maasai-Mara ecosystem, Eburu Forest and lakes Naivasha, Elementaita and Nakuru conservation and ecological areas, and Nairobi National Park.

In the mapping, it was observed that all the wildlife dispersal areas and migratory corridors in the Kenyan rangelands have been interfered with by human activities to the extent that some are completely blocked while others are highly threatened.

Athi-Kaputiei migratory corridor has been blocked by high-density settlements, fences and subdivision of land along the Kitengela-Namanga highway.

Athi-Kaputiei, Amboseli and Mara-Loita were wildebeests’ migratory routes but all have virtually been blocked.

Mara-Serengeti is currently the largest remaining wildebeest migration route. The route straddles Kenya and Tanzania. Wildebeest population in the ecosystem has since declined from 1.3 million in 1977 to 588,000 in 2016, according to a recent study.

The study, which was published in February this year, detailed the status, threats and conservation measures on wildebeest migration in Kenya and Tanzania. The lead author Joseph Ogutu, who is a statistician at the University of Hohenheim highlighted threats including construction of fences, settlements, infrastructure and competition with livestock which resulted in the decline of wildlife in their former migratory routes.

“East Africa’s remaining populations of migratory wildebeest are found in five ecosystems. Using aerial survey monitoring data, collected over almost 60 years in Kenya and Tanzania, we found that four migrations have virtually collapsed. The Athi-Kaputiei, Amboseli and Mara-Loita migrations are the most severely threatened,” says Ogutu.

“Fences, for example, are expanding fast in the Mara-Loita ecosystem. This was driven by the splitting up of former group ranches – communally owned land – and the formation of some wildlife conservancies,” says Ogutu.