By STEPHEN RUTO | 3yrs ago 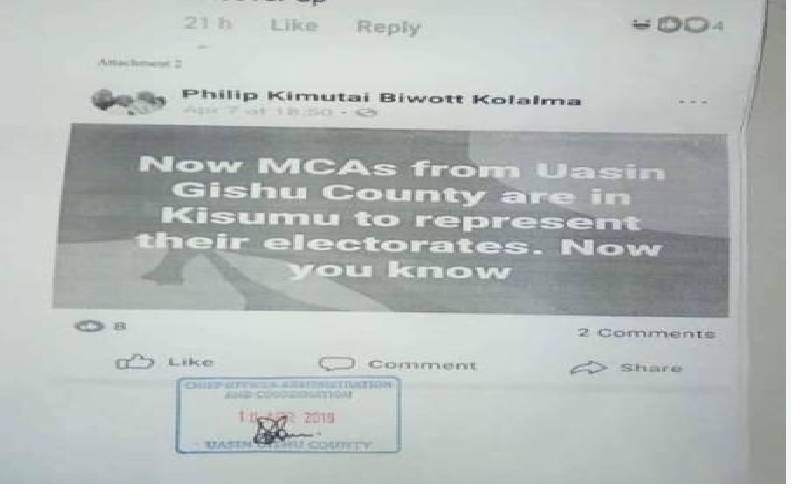 A senior official of Uasin Gishu County has been interdicted for criticising a ward reps’ tour, which he said was unnecessarily costly to tax payers.

Philip Kimutai Biwott, a sub-county administrator, made a Facebook post, criticizing the MCAs for trooping to Kisumu last month with the aim of pocketing allowances and not to discharge a meaningful county function.

The administrator for Kapseret sub-county is an active social media user and a no-nonsense leader.

His post on April 7 read: “Now MCAs from Uasin Gishu County are in Kisumu to represent their electorate."

“Allowances (in) Kisumu is Sh14,250 per day... In government when you are broke you create a workshop, training, seminar, interrelationships etc. to cover up.”

According to the interdiction letter written and signed by Wilson Sawe, the acting Chief Officer in charge of Devolution, Administration and Coordination, Mr Biwott is accused of illegally disclosing government information.

“It has been reported to this office that between April 4 and 5, in your Facebook page, you posted comments which were deemed to bring some bad light to Uasin Gishu County officers who were on official duty in Kisumu,” the suspension letter read.

“This is tantamount to disclosing government information, from a senior officer, that would have otherwise not been disclosed to the public. This amounts to gross misconduct as per Public Service Commission discipline manual for Public Service (2016),” he said in the interdiction letter.

The interdiction sparked an uproar on social media since Tuesday, with residents defending Biwott for exposing plunder of public resources by county officials. [Stephen Rutto]

By Gilbert Kimutai and Caroline Chebet 6 hrs ago
Premium Kones: Why I chose to hang my political boots