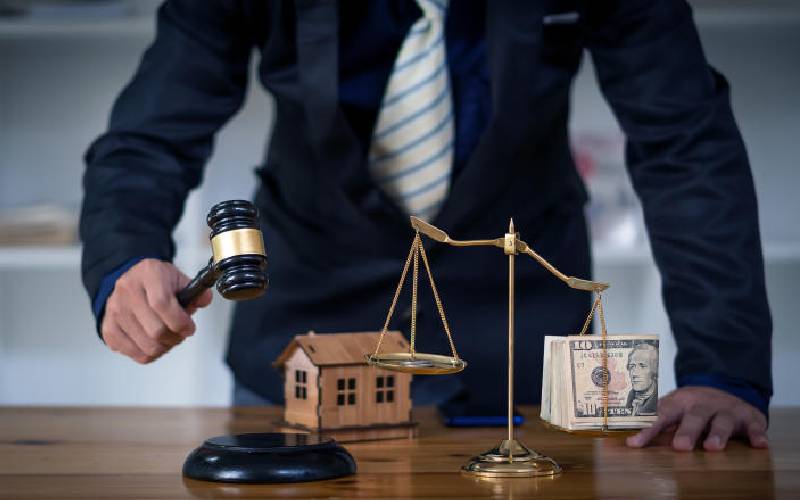 In the recent past, the infamous auctioneer's hammer has not landed on most of the lucrative properties put on sale.

Many reasons have been given for this, such as a prevailing property sector slump and now the Covid-19 pandemic.

But one that has been missed is overvaluation of the property. Sector experts reckon that valuers have refused to adjust to the reality of the depressed economic times.

“When property prices are increasing there tends to be inherent overvaluation. When a drop in price occurs, there is a lag in price reduction, leading to overvaluation,” Kenya Professional Realtors Association (KPRA) Director Gerald Githinji told Real Estate.

Property auctions have become a staple in the back pages of local dailies as foreclosures haunt mortgage holders and other borrowers that are unable to pay loans.

“Everything moves as long as the valuation has been done right. It's not that the properties have no takers,” he said.

Garam is one of the leading auction firms in the country with properties for sale running into billions.

Mr Gikonyo says the overvaluation stinks of collusion between valuers and borrowers facing foreclosures from banks, and says the lenders should quickly clamp down on the valuers to hasten foreclosures.

The higher the property valuation, the higher the fees charged by the valuer. “They get paid twice, by the bank and the borrower,” said Gikonyo.

But why would a prospective home owner or investor go for auction houses?

Responding to a recent story by Real Estate on auctions, Helen Butoyi, a reader from Ngong, asked for "humane" action as the Covid-19 pandemic was global and had affected all economically.

"Let the relevant institutions take more humane measures to allow those who have put in a lot of their sweat and resources in the said properties retain them until they are back on their feet," she said.

"The grace period can be reviewed from time to time to the benefit of both parties."

For the buyers, however, there are some good deals to be made at auctions.

There are two prices at an auction - the market value and the minimum price.

For example, a valuation by Housing Finance on a property on auction, the Thika Business Centre, showed it had an open market value of Sh720 million and a forced sale value of Sh540 million.

Gikonyo said the property was recently sold at Sh563 million.

Buyers would also be dealing with legitimate entities such as banks who have the documents, minimising chances of one being swindled.

"Having been charged by a bank dealing with legitimate title, when anything goes wrong you have an entity you can go back to,” said Gikonyo.

Another limiting factor on getting buyers is linked to a recent law that seeks to protect property owners by demanding that a property cannot be sold at under 75 per cent of the market price.

Gikonyo offers insights as to why a private treaty might beat an auction in a particular neighbourhood owing to overvaluation.

A private treaty refers to a deal for the sale of a property at a price negotiated directly between the vendor and purchaser, or their agents.

In an auction, a Sh10 million property would go for about Sh7.5 million. In a private treaty, the property's owner would ask for about Sh8 million.

There is a tendency for people to shy away from a distressed property and instead spend the Sh500,000 more.

“This affects the sellability - one would rather not buy a property that is not willingly being sold,” the auctioneer said.

“In that case the valuer is the cause of failure. If they factor those dynamics and make market value Sh6.4 million, it would sell faster.”

The law does not allow one to be both an auctioneer and valuer. Valuation rows have also led to long-running disputes.

Gikonyo recalls that in the 1990s, banks had established their own valuation departments and properties used to sell quicker.

He said this might be the best time for liquid investors to get into real estate. “This is known as a buyers market, it's rock bottom and can never go lower than these prices."

He noted that over the pandemic period, financial experts have been advising people to preserve cash but this “adopt and wait” attitude is past due.

“When it becomes 'safe' to spend, people will crush the property market and prices will skyrocket yet they ignored to buy when prices were low.”

"Buy low and sell expensively when that time comes."

David Wanderi of Taifa Auctioneers also says discounts are the best thing about auctions. The bad part is that someone is being dispossessed, making it a lengthy battle sometimes.

“The tough thing is that some people refuse to get out of the houses, and you end up evicting them through tedious court process,” he said.

What are the fast moving properties in the auctions?

Mr Wanderi says apartments are hot; they are finding buyers among a growing class of young professionals and Kenyans abroad.

“Apartments are the most popular. Many young people changing jobs are going for them, and also those in the diaspora,” he said.

Commercial properties, majority of which exceed the Sh100 million price tag, are tougher to sell because that's a market for a select class of investors, said Wanderi.

“Property that takes half a page in a newspaper is worth over Sh100 million and has its own set of clientele."

According to the recent Kenya Bankers Association Housing Price Index, apartments continued to dominate, accounting for 71 per cent of the total number of units traded, while maisonettes and bungalows accounted for 23 per cent and four per cent, respectively.

“If one is liquid now, this is the best time to get into real estate,” he said.

He, however, lamented that low purchasing power owing to the pandemic has seen auctioneers stuck with properties.

CS Kagwe: You will get your second Covid-19 dose, don’t worry

All Kenyans who got their first dose will get their second dose at the expected time frame.

Fitting and furnishing can be overwhelming, it is hard to decide which colour best fits your home and what style best suits your vision.