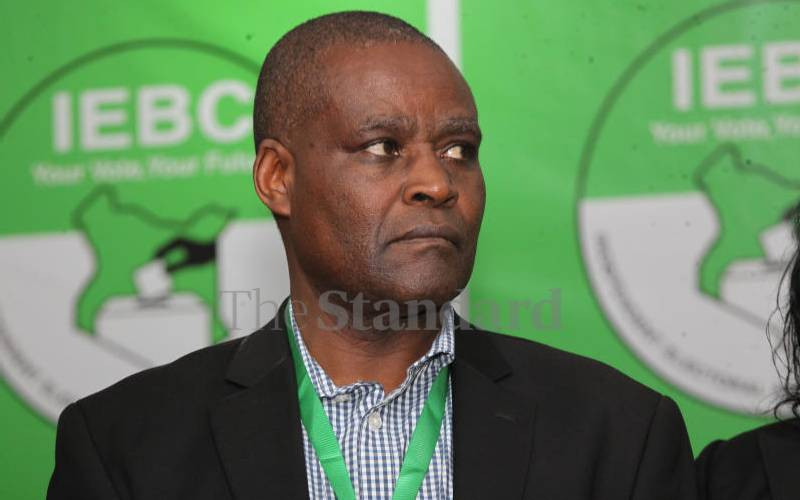 IEBC Commissioner Francis Wanderi (pictured) has told the National Assembly Departmental Committee on Justice and Legal Affairs hearing four petitions for his removal from office that he will not file his response.

Advocate Nduro Gichamba representing Wanderi told the committee led by Chairperson George Murugara (Tharaka MP) that his client was entitled to fair hearing and access to information and they had not gotten some documents they requested for.

Mr Gichamba said they had asked for minutes of meetings between commissioners, National Security committee and footage from Bomas which they had not gotten so far.

The Advocate told the committee that his client had sought the full extent of IEBC Chairperson Wafula Chebukati affidavit, the first petitioner Republican Liberty Party documentation in support of the affidavit which was not available.

"We have not gotten any responses so far, we have not been accorded any response on whether the information sought will be provided or not, therefore my client is not able to proceed with this hearing as matters stand as they are," said Gichamba.

Murugara said there was a provision for making written submissions and they have only four petitions hence Wanderi was at liberty to do what he felt was fair to him.

The JLAC Chairperson said that Wanderi had waived his opportunity to raise the issues since he had withdrawn on November 24 and said he did not intend to proceed with petitions.

"This committee is only aware of four petitions against Commissioner Wanderi which he is at liberty to respond himself, send his advocate or even send written submissions, " said Murugara.

Jackline Bunei for the Republican Liberty Party said that Gichamba had not specified the documents sought and they were not obliged to supply any other document other than the petition.

Bunei asked the committee to consider having the issues raised in the petition against Commissioner Wanderi unopposed and proceed with the matter to conclusion.

Advocate Nelson Mutai for petitioner Geoffrey Langat told the committee that the four petitions were before Parliament and some of the issues Gichamba was raising were meant for another forum.

" My learned friend has chosen to forfeit his right to defend his client and that the committee should make its ruling against the matter since it has not been responded to or challenged," said Mutai.

Mukurweini MP John Kaguchia said that the commissioner was putting too much emphasis on technicalities and that the respect for the petitioners and what they have sought need to be observed.

Gatanga MP Edward Mureu wondered why Gichamba was seeking for Chebukati's affidavit and Bomas footage yet this are personal accusations against him and not the entire commission.

South Mugirango MP Silvanus Osoro said this are delaying tactics by commissioner Wanderi so as to forestall the investigations and warned him that he will not succeed.

If the four IEBC Commissioners are serious they should have accepted to be investigated based on documents available instead of raising issues with the hopes of hindering our work, they will not be successful, " said Osoro.

Kibwezi West MP Mwengi Mutuse said that with responses or not the committee is obliged to come up with recommendations in one way or the other.

Safaricom responds to client's complaint on 'strange' M-Pesa transaction
Business
By Mate Tongola
34 mins ago
Former Chelsea forward Atsu rescued after Turkey earthquake
Sports
By AP
1 hr ago
Vera Sidika: I have scheduled a day to give birth to baby number 2
News
By Vincent Kejitan
1 hr ago
Never give up on your dreams: Diamond tells his fans
News
By Vincent Kejitan
2 hrs ago
.