Numbers that show the huge task for IEBC: Nairobi is mother of them all

By Dominic Kimani | 2mos ago

Nairobi county will have the highest number of polling stations in next week’s General Election, because it accounts for the country’s largest number of voters.

The 2.4 million electorates will vote in some  3,643 polling stations spread across the county’s 17 constituencies. The county got the highest additional polling stations – 265 – compared to all the other 46 counties. The city also registered the largest increase in number of voters.

Kiambu, with 2,113, has the second highest number of polling stations, courtesy of its high voter population which stands at nearly 1.3 million.

On the flip side, Lamu County, with 191 polling stations, has the least number of electoral units. It also has the lowest number of voters, 81,453.

The diaspora, with 10,444 voters, will have 17 polling stations. Prisons have 106 polling stations, as the Independent Electoral and Boundaries Commission registered 7,483 prisoners as voters.

Rift Valley Province leads in the number of polling stations among the former provinces, with 12,359. The former North Eastern has the least at 1,720 stations.

The results declared at the polling stations, for all elective seats – President, Governor, Senator, Member of Parliament, Women Representative and Member of County Assembly – will be final, as decided by the courts in previous judgements.

“The lowest voting unit and the first level of a declaration of presidential election results is the polling station. The declaration form containing those results is a primary document and all other forms subsequent to it are only tallies of the original and final results recorded at the polling station,” the Court of Appeal ruled in 2017, a judgement also rendered by the High Court in the famous Maina Kiai case.

The activist had gone to court seeking to have the results declared at polling stations as the final results. 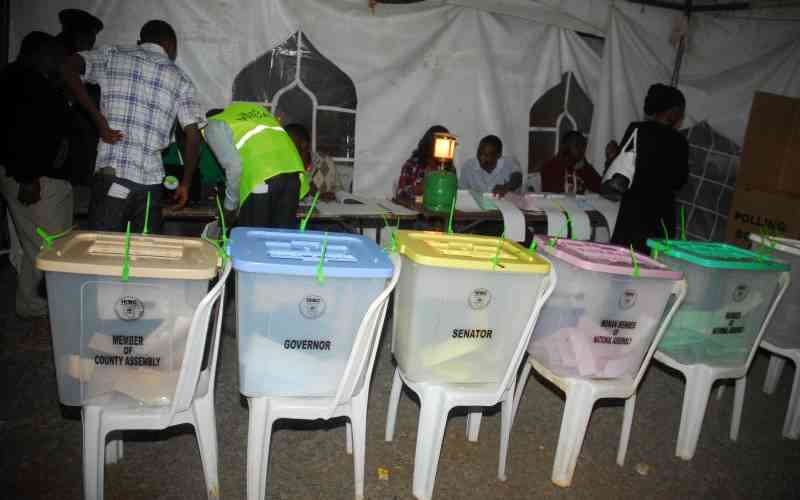 Premium To politicians: Guard your votes, ours was the voting
After voting on Tuesday next week, each Kenyan should go back to their homes, pick a packet of popcorn and await the results. Politicians should have already put measures in place.
Opinion
By Oscar Obonyo
2 months ago
.

How well do you know the trending news stories this week?
Quizzes
By Clay Muganda and Reina Kimeu
35 mins ago
Premium First things you must do to save life when bitten by rabid dog
Livestock
By Dr Paul Kang’ethe
39 mins ago
Police, fans clash outside Argentine soccer match; 1 dead
Football
By Associated Press
1 hr ago
Premium How MP John Waluke forged his way to jail in maize scandal
National
By Paul Ogemba
1 hr ago
.

By Clay Muganda and Reina Kimeu 35 mins ago
How well do you know the trending news stories this week?