Baba vs Six months: William Ruto, Raila Odinga take on each other after Jacaranda chaos

Deputy President William Ruto and his main competitor Raila Odinga on Sunday threw jabs at each other after Jacaranda chaos that left scores injured.

Ruto who is seeking to succeed President Uhuru Kenyatta on a UDA ticket under Kenya Kwanza Alliance accused Raila as the mastermind of the chaos.

During the day, police officers had to move in to disperse Kenya Kwanza and Azimio supporters who were sizing each other at the famous Jacaranda Grounds.

This came after a dispute arose over which side of the political faction should hold rally at the venue.

A contingent of anti-riot police was deployed to the grounds to avert the clash after Kenya Kwanza and Babu Owino claimed to have booked the venue. Speaking to The Standard on the telephone, Embakasi Sub-county police commander Makau Masai said there would no political activity at that venue.

But Kayole Sub-county police commander Paul Wambugu said the Kenya Kwanza event was to go on as planned and the heavy police presence at the venue was for security reasons.

“It is normal for police officers to be present in a meeting because people are in attendance. There is only one meeting for Kenya Kwanza,” said Wambugu. Addressing supporters during the rally, Ruto said his priority was to revive the economy.

And Ruto in his sentiments said youths should not be given handouts to throw stones. Instead, he added, they need jobs and businesses, which Kenya Kwanza government will deliver once it gets to power.

“Mr Kitendawili, the lord of violence, has done it again: Hired innocent, desperate and jobless young people, victims of his sabotage of the big4 jobs plan to shed innocent blood in his eternal quest for power. What a shame on fathers day.  Mr father of violence, Freedom is coming Aug 9th,” said Ruto on his Twitter page.

The Kenya Kwanza flag bearer said his opponents were panicking and had resorted to hiring goons to disrupt Kenya Kwanza rallies. 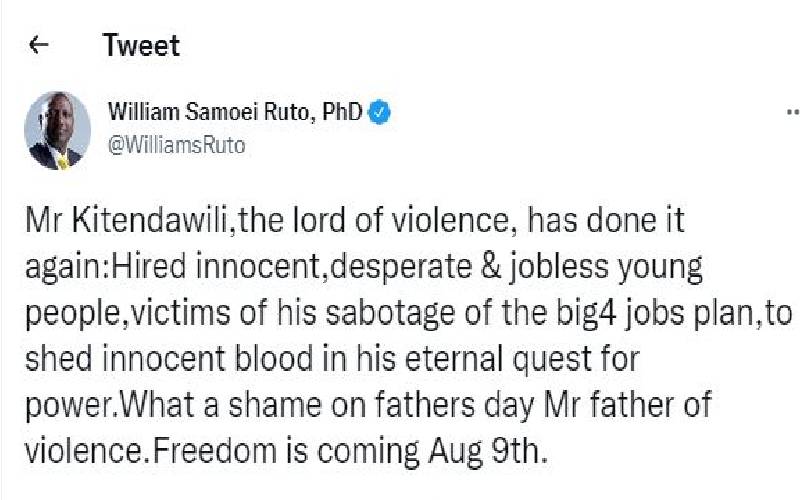 “The polls in August will be for change and that of making better the lives of Kenya. The days of politics of violence are long gone,” he said.

He accused President Uhuru Kenyatta of prioritising the Building Bridges Initiative (BBI) at the expense of the Big Four agenda.

Ruto, at the same time, blamed the rising cost of living on the handshake between the President and Azimio leader Raila Oidnga saying it derailed the Jubilee government agenda.

But Raila in his response said Ruto had become a clueless and rudderless fraudster seeking sympathy votes ahead of the election.

“Mr Six months, for how long will you blame everyone for everything that befalls you. It’s not okay to be rudderless, clueless and plan-less. This country is slowly overcoming fraudsters and shortcuts that define your politics. Maliza uende. There is no room for sympathy votes!” Raila said. 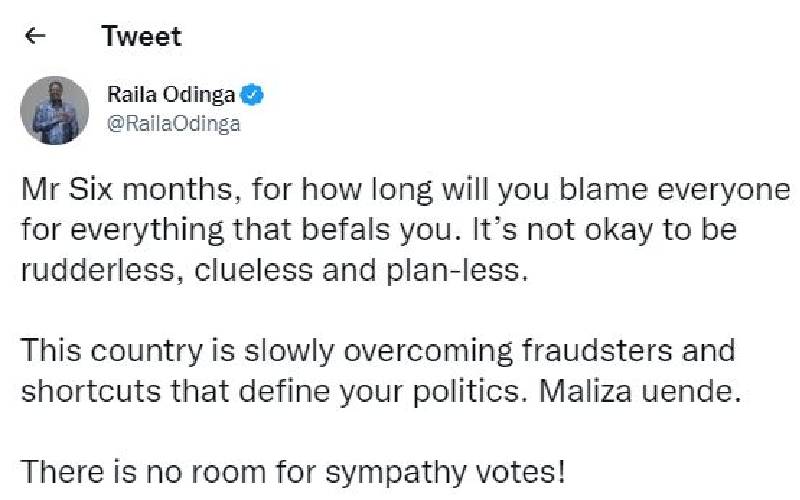 In the day Raila who is Azimo la Umoja One Kenya coalition flag bearer accompanied president Uhuru at Akurinu’s 100-year celebration at Kasarani.

Raila said if he wins the August polls, his government will support faith-based institutions to enhance unity and tolerance in our nation.