Today, Deputy President William Samoei Ruto presents his nomination papers to the Independent Electoral and Boundaries Commission (IEBC) at the Bomas of Kenya in his quest to seek the presidency on August 9.

For Ruto, who will be running on a UDA ticket, the journey culminating in today’s event has been in the making for over 20 years.

Ruto was born on December 21, 1966 in Kamagut village, 15 kms from Eldoret, near the Webuye – Kitale junction, famously known as ‘’maili tisa’’.

It was at the same junction that he would engage in chicken selling or what he calls “hustling” when he was a pupil at Kamagut, after moving from Kerotet Primary School.

After his first degree, Ruto tried his hand in business and together with friends registered a trading company while living in informal settlement areas in Nairobi.

A group of young Kenyans led by Cyrus Jirongo, who later became the MP for Lugari, Fred Amayo, Gerald Bommet and Sam Nyamweya then teamed to form the Youth for Kanu ‘92 (YK ‘92) pressure group to campaign for President Moi’s re-election.

He slowly built his profile as a hard working party youth, who faithfully ran errands for top officials at the KICC offices as he also got the opportunity to interact with the moneyed YK officials.

The fast rising politician would later briefly occupy the position of district Kanu branch chairman as he laid ground for the 1997 elections when he vied and dislodged Chesire.

During that election, he teamed up with Jirongo and used the ‘Ukweli wa Mambo’ slogan on their campaign T-shirts and other materials that were jointly sourced.

He then served from the opposition benches and together with Jirongo, Kipruto arap Kirwa and other youthful MPs became rebels within the party and briefly formed the United Democratic Movement (UDM) party before they quickly abandoned it and went back to Kanu.

Back in the fold, Ruto became increasingly involved in party matters and was said to have been behind the drawing of the list of 3,000 delegates that attended the landmark March 18, 2002 Kanu elections which endorsed the merger between Raila Odinga’s National Development Party (NDP) and Kanu to create New Kanu.

With the likes of Julius Sunkuli, the youthful group with Ruto as the director of elections took charge as President Moi began working on his succession plan that later backfired after he picked Uhuru Kenyatta as his preferred successor.

Moi had earlier at the tail end of his leadership appointed him an Assistant Minister in the office of the president from 1998 to 2002 and later elevated him to the full cabinet portfolio as Minister for Home Affairs for three months, when Musalia Mudavadi was also promoted to be Vice President.

After Kanu lost, Ruto moved to the opposition benches and became increasingly vocal about the mistreatment of the former president by President Kibaki’s allies in government.

A group led by Raila and other disgruntled politicians allied to the Liberal Democratic Party wing of the National Rainbow Coalition, among them, Cabinet ministers Kalonzo Musyoka, Prof Anyang’ Nyong’o, Ochillo Ayacko, William ole Ntimama, Najib Balala and Linah Kilimo were sacked for opposing a draft constitution presented to a referendum in 2005.

They went on to form the Orange Democratic Movement (ODM), derived from the Orange symbol of the No’ side, and were joined by Kanu leaders led by Uhuru and Ruto, who had ganged up with them to oppose the draft constitution for, among others, retaining the presidential system and attempting to reintroduce regionalism.

Ruto used the opportunity to lead almost the entire Kalenjin community leadership, among them senior leaders like Henry Kosgey to defect to ODM.

When ODM split into two, Kalonzo’s ally Dan Maanzo ran away with the ODM-Kenya registration certificate, denying Raila the vehicle he wanted to use for his 2007 presidential bid, Ruto remained with him in ODM after securing the registration certificate from lawyer Mugambi Imanyara, Ruto stuck with him even as Uhuru moved to the Party of National Unity to back Kibaki’s re-election.

But they soon very out with reporting indicating he was unhappy that he had been shortchanged by Raila because he had contributed more votes through the Kalenjin than Musalia who Raila rewarded with the position of Deputy Prime Minister.

The infighting boiled over to the extent that in February 2009, Raila, as Prime Minister, suspended him over the maize scandal but president Kibaki countermanded the move. On April 21, 2010, he was transferred to the Ministry of Higher Education swapping places with Raila ally, Dr Sally Kosgey.

In 2011, he was named among the six individuals who were accused of having planned and sponsored the 2007-08 post-election violence in which 1,200 people were killed and many others displaced following the disputed 2007 presidential election.

He was charged at the International Criminal Court (ICC) alongside journalist Joshua Arap Sang with crimes against humanity that included murder, deportation or forcible transfer of population and persecution of people.

Ahead of the 2013 elections, he joined forces with Uhuru to form the Jubilee Alliance with Uhuru as the candidate and Ruto as running mate. They defeated the Coalition for Reforms and Democracy (Cord), which had fronted Raila and Kalonzo, to form government.

His case at The Hague-based ICC collapsed in 2016.

Uhuru and Ruto were re-elected in 2017 soon fell out over what has been termed as his premature 2022 campaigns.

Ruto however claimed that his responsibilities were taken over by Raila after the handshake between Uhuru and the ODM leader inn 2018, making him redundant.

Although looking increasingly frustrated, the DP has continued putting on a brave face and continued campaigning to succeed his boss .

Uhuru and his allies have since last year showed their preference for Raila as his successor. 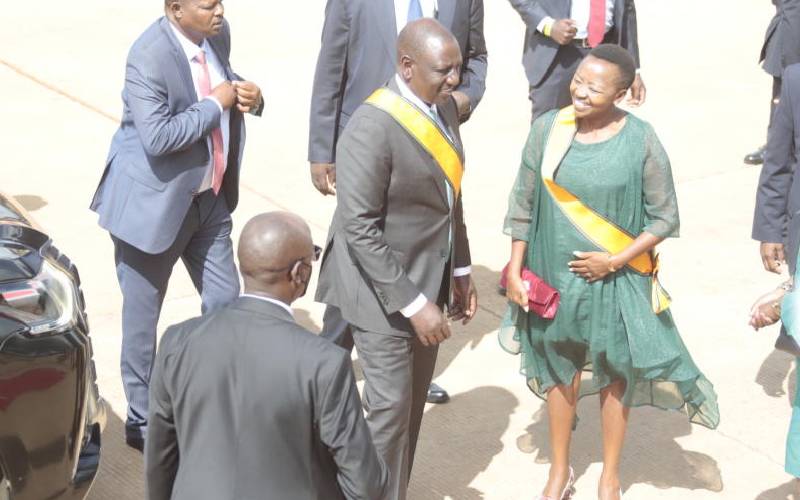 Premium History beckons for William Ruto as he starts journey to seek presidency
Ruto will become the first principal assistant so far to have nursed “serious ambition” and staged a “most powerful, well-oiled and sustained” campaign for the presidency.
Politics
By Oscar Obonyo
3 months ago
.

By Nzau Musau 36 mins ago
From Ward administrator to the Cabinet, Njeru also sold insurance