By Allan Mungai | 5mos ago

The skies frowned, the sun coyly hid behind forlorn clouds and Nairobi City shivered as the body of Kenya’s third president Mwai Kibaki made its final lap of the capital yesterday morning.

Pregnant clouds gathered and from time to time gave way to light showers that swept the tarmac clean.

The military would with their sparkling black boots rising and falling as one on the tarmac in unison raising small droplets of water as they marched from State House road to Nyayo stadium where Kibaki’s final requiem mass took place.

The former president’s final lap in the city started at around 8am when some of the family members and grandchildren arrived at the Lee Funeral home to view the body for about 15 minutes before the military took over the programme.

Afterward, the body was transferred into a hearse bearing Kenya Army identification numbers, then joined Valley Road and then Processional Way.

The late president’s body then made a final trip to the State House, which he called home between 2002 and 2013 for the last guard of honour by the military.

After a short guard of honour at State House, the cortege left for Nyayo Stadium a six-kilometre journey that took about half an hour arriving at 10:45am.

The Kenya Defence Forces gun carriage carried the body for the rest of the journey to the Stadium in a slow march led by the three forces from Processional Way, Kenyatta Avenue, and Uhuru Highway in special formation.

The convoy took a turn at Aerodrome Road and entered the stadium at a quarter to 11am as planned and was received by President Uhuru Kenyatta.

Escorting him were troops from the Kenya Army in their distinct red attires, the Air force in blue, and Kenya Navy in white all in special formation to complete full military honours.

A straight stretch that leads to State House compound had General Service Unit officers in ceremonial uniform receptively lined up on both sides of the road, their guns on the ready on both sides as the solemn procession progressed.

Regular police in their ceremonial uniform too lined up the route, spaced at a distance of about five metres apart, this was from State House gate all the way to Nyayo Stadium.

At the entrance was a photo gallery depicting the life of the late president from his early days, in different dockets all the way until he became Kenya’s third President.

Here, security officers were tasked to check the items each one was carrying. No foodstuff or drinks were allowed with those who had carried water forced to leave them.

The crowds queuing at the gate kept streaming in into the afternoon filling the terraces at Nyayo stadium almost to capacity. For some, business was booming as they sold merchandise bearing photos of the late president.

Despite initial signs of rainfall, the clouds dissipated giving way to some sun that shyly emerged from its hiding place warming the crowd and stopping some of those who had started to leave when it started drizzling.

It also put to an end multiple scuffles experienced in various pockets of the  stadium over umbrellas being doled out by the event organisers who had long anticipated the rains.

The umbrellas were emblazoned with Kibaki’s face extracted from a picture during his happier days.

At the centre of the stadium were two huge tents and underneath were chairs draped in black, red, green, and white fabrics signifying the Kenyan flag. The immediate and extended family of Kibaki sat in one tent while some of his constituents from Othaya sat in the other.

And when Kibaki’s body arrived aboard the military’s esteemed gun carriage at exactly 10:43am, it was driven around the stadium for all in attendance to give their goodbyes.

All the while, army men clad in full ceremonial regalia garlanded the casket and matched in unison as the crowd was serenaded by the tunes belted out by the army choir.

Soon after, the military placed the casket bearing Kibaki’s body in front of the pulpit where Catholic Bishops Philip Anyolo and Martin Kivuva presided over the mass.

In the sermon that ran for well more than five hours, the church, through the Scripture, re-assured the family and congregation that Kibaki had found peace.

The ceremony started with the Heads of States and representatives from foreign governments being given an opportunity to pay their last respects. 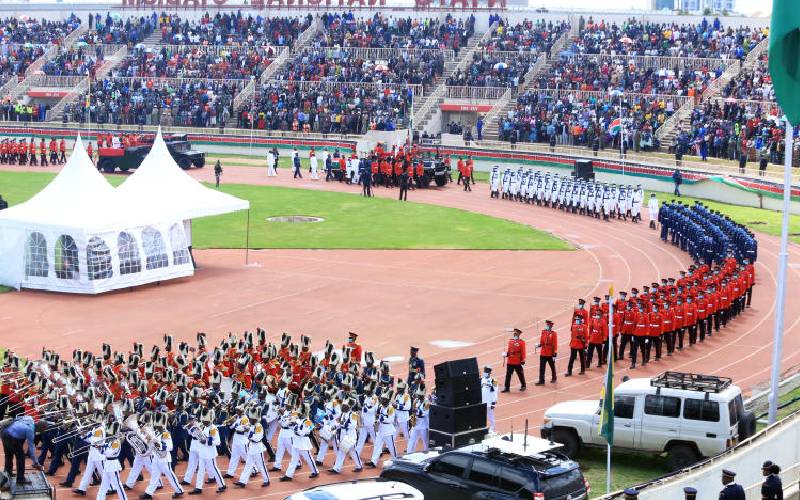 From time to time, the State House choir took the lead and enlivened the congregation with their soulful voices.

Jimmy Kibaki was the first to give a heartfelt tribute. He was followed by Azimio la Umoja One Kenya Alliance leader Raila Odinga and then Deputy President William Ruto.

The former and the latter attracted a rapturous roar from the packed stadium as Azimio and Kenya Kwanza chants rented the air.

Right before Uhuru was welcomed to speak, he joined Kibaki’s family at the casket smack in the middle of the stadium where they held prayers.

And when it was the turn of the three foreign Heads of State to speak, they were adorned with a similar podium next to Uhuru’s and bore the Kenyan Coat of Arms.

It was, however, during Kiir’s speech that gratitude and a sense of loss became palpable.

Leader of Africa’s youngest nation regretted the death of the man who steered negotiations in a politically volatile Sudan to birth what is now South Sudan.

When Uhuru’s turn to speak came, he described Kibaki as a strong finisher: “A man/leader is not measured by what he started but by what and how he finished. Kibaki finished strong.”

At 2:58pm, as the choir sang another number, Kibaki’s body was mounted atop the military gun carriage and the exit protocol began. As the body exited the stadium, it was garlanded by two military humvees, which carried the white flag guarded by the current army generals.