Kalonzo: I must be on Raila's ticket

Wiper leader Kalonzo Musyoka has sustained the push to be named the running mate of Azimio candidate Raila Odinga as the deadline for selection draws near.

Speaking during a church service in South B, Nairobi, on Sunday, Mr Musyoka said it would make no sense for Mr Odinga to go for the presidency without him after they had run together in the 2013 and 2017 elections.

“What is a better-quality ticket than, according to us, won twice. Why would you want my brother Raila (Mr Odinga) to end up being president and his running mate twice is out? Take it to the bank, I am in the decision-making team,” he said.

Mr Musyoka criticised leaders who have given him a tribal tag.

He argued that he is a national leader and is not limited to the Kamba community where he comes from.

“Those Kenyans who look at me as a Kamba do not understand me. Kalonzo (Mr Musyoka) is beyond a Mkamba,” he stated.

The Wiper leader said it doesn’t matter what region the running mate comes from or their ethnicity as long as he/she is a person of integrity and can deliver their mandate to the people.

“If anybody tells you that Kalonzo (Mr Musyoka) is not a Kikuyu, he is not a Mutharaka therefore the Kikuyus and Tharakas and everybody else must get to be vice president or president so that this country can progress, please pray for them,” said Kalonzo.

Makueni MP Dan Maanzo claimed there is a plot within the Azimio la Umoja One Kenya alliance to deny Kalonzo the running mate position in favour of the Mt Kenya region.

Mr Maanzo warned that the scheme will be a  blow to Azimio and might deny it votes within the lower Eastern region and One Kenya Alliance strongholds.

Recently, President Uhuru Kenyatta and Mr Odinga identified a team of technocrats and politicians to identify the right candidate for a running mate from the 26 parties in Azimio.

“From the original agreement we were to register the chairman of the council, President Uhuru Kenyatta, the presidential candidate, and the deputy presidential candidate at the same time. However, that was not followed, and also during the gazettement our party leader was not involved in any way, we just saw it out,” said the Makueni MP.

Mr Maanzo, who is also Wiper secretary-general, said the party was not consulted during the constitution of the national delegates member committee where President Kenyatta was given leeway to select four members while Raila and Kalonzo chose only one member.

He expressed fears that the committee will be partisan and will favour a candidate from Mt Kenya.

However, the task force has been directed to employ a scientific system, through the use of polls, to show the popularity and influence of the different candidates eyeing the running mate position.

Actors within Azimio have stated that the running mate seat is not contestable but one that will require the final nod from the presidential flag bearer.

“I think I have sacrificed so much. This country was on the brink one time and through the efforts of one man called Kalonzo we did not go the Somalia way,” said Kalonzo in a previous interview with The Standard.

The former vice president said he parted ways with Raila over failure to honour a Memorandum of Understanding under NASA that would have seen the ODM leader support him for the presidency this year. 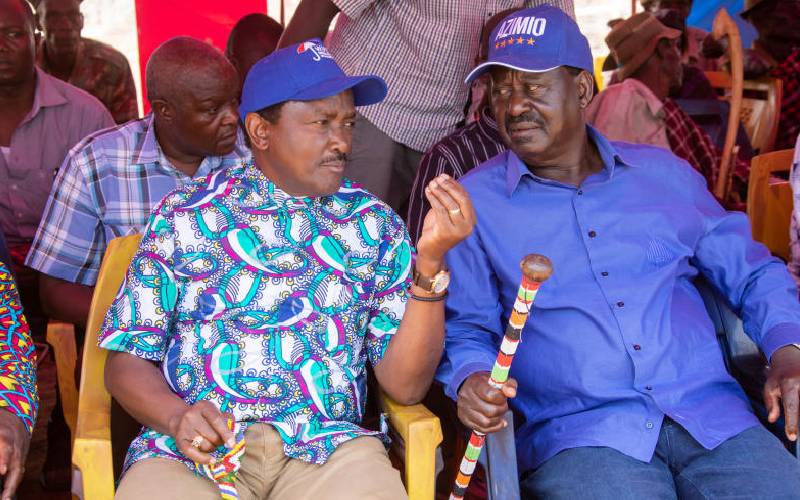 Premium The Kalonzo factor: Why it will build or break the Azimio dream
Kalonzo reads political mischief in Raila’s insistence on keeping the company of Ngilu, Mutua and Kivutha, who are his political rivals.
Politics
By Oscar Obonyo
2 months ago
.

By Kennedy Gachuhi 9 hours ago
Martha Karua to Ruto: Azimo government will protect you