Stop talking ill of Uhuru, Raila and his allies warn

By Kennedy Gachuhi | 8mos ago

He said among the presidential candidates only Raila has shown humility when national interests are at stake.

“I can foresee danger if these people take leadership of this country. The safe pair of hands for this country is Raila who has no bile and vengeance. His history speaks for itself,” he said.

Nakuru Governor Lee Kinyanjui said the ODM leader has won Mt Kenya support because of the value he has attached to the region and its politics.

“On the other side, our people were being told to disband their political parties. When ANC and Ford Kenya went there they were received as principals. That is how much the other side disregards Mt Kenya,” said Mr Kinyanjui.

“Why the coastal region has not produced a strong presidential candidate is because whenever a leader was seen to be rising, those around them pulled them down. Don’t allow that to happen to you.

“You can’t claim to love the Mountain and insult its leader. If Ruto will not respect us, we will make him to. He doesn’t have the monopoly for the strategies he is using to demean Uhuru,” Mr Joho said.

Raila was hosted in Ol Kalou by Governor Francis Kimemia, Water Cabinet Secretary Sicily Kariuki and a host of legislators.

He said his agreement with President Kenyatta was aimed at transforming the political landscape and averting hardline differences among Kenyans.

“We have been in dialogue with President Uhuru and our aim is to ensure the country does not slip back to politics of division based on ethnicity, religion and age. We want to have a Kenya where political differences will never bring the country to a standstill,” said Raila.

He said that after Independence, leaders formed movements that had policies “unlike today when politicians have turned to politics of ethnicity”.

“Jaramogi inducted Kibaki into politics. Tom Mboya was a great supporter of Mzee Jomo Kenyatta. These people had policy differences but never tribal differences. That is the politics we want,” he said.

The ODM party leader drummed up support for his candidature and promised to continue with Uhuru’s development agenda for the region if elected on August 9.

“We shall enhance the last-mile connectivity programme to ensure we have power supply. We shall continue with water projects and health and education plans affordable to Kenyans,” he said.

Raila reiterated the importance of investing in the private sector to boost the economy and absorb the growing workforce. He also pledged equal opportunities for the regions. “We shall ensure all counties get a fair share of jobs in government. The government can only employ 700,000 Kenyans yet we are churning out a million new entrants to the job market.”

Raila promised that his administration would support development of value-addition industries through public-private partnerships to grow the economy. 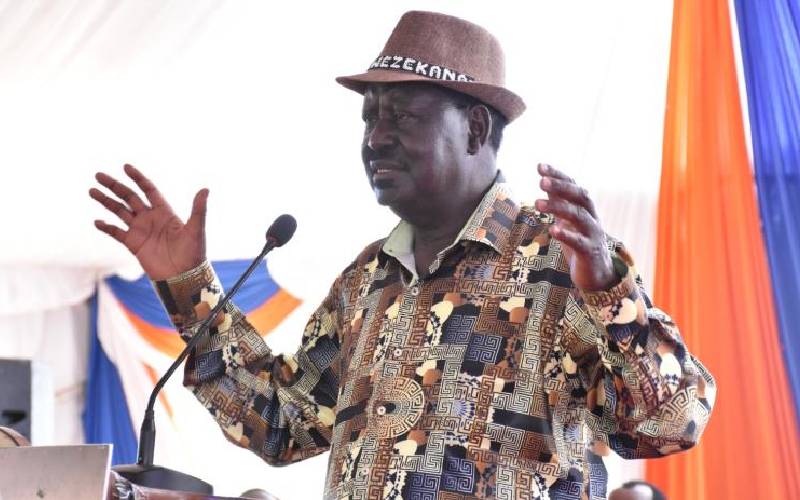 Premium ODM boss denies being president’s project for 2022
Raila dismissed claims by Ruto that he was hiding behind President Kenyatta because he was scared of facing his competitors.
Politics
By Jacob Ngetich
9 months ago
.

By Associated Press 43 mins ago
Tonight at 7:45pm: Chastened Man United back in Europa League action