Arriving to a rousing welcome in Kakamega town, a united One Kenya Alliance (OKA) leadership rolled out their grand plan to conquer the hearts and minds of Kenyans ahead of next year’s presidential election.

For a few weeks, the coalition comprising Baringo Senator Gideon Moi, who is the Kanu chairman, ANC leader Musalia Mudavadi, Wiper’s Kalonzo Musyoka and Ford Kenya’s Moses Wetang’ula had taken a back seat, leading to speculation as to its resolve and unity.

Yesterday, the principals announced that they had been working on a strategy to sell their agenda to Kenyans as well as a roadmap to unveil their choice of presidential candidate.

Before that, the leaders would spread their net wider to rope in more like-minded politicians.

Their newest catch, UDP leader Cyrus Jirongo, joined them in the Western outing.

The principals underscored their resolve not to be intimidated to throw their weight behind someone outside of the coalition, outlined their manifesto and promised to remain united.

“There are those who say OKA is a boardroom affair, but look, here we are and we have a mega plan to go on a tour around the country.

“Achieving such a feat needs logistics first, reason why we delayed,” said Moi.

Raila left the country early this week for United Arab Emirates just as it emerged he had registered a coalition name under his wing.

Unlike the two, however, OKA’s grand plan seeks to grow the fold first.

Yesterday, Moi likened OKA to an umbrella big enough to accommodate other leaders and make a national winning team.

Mudavadi said OKA’s arms were wide open for defectors from other political formations.

He added that the coalition luminaries were under increasing pressure and intimidation but did not disclose the source of the pressure.

“This habit of people calling others at night and dictating to them on which political coalition to back must end. Let this be noted,” said Mudavadi.

He spoke of the need for the Independent Electoral and Boundaries Commission to offer enough guarantees to the country that next year’s election will be free and fair.

He said OKA will push Parliament into approving more funds to the electoral agency to allow for voter registration.

“We plan to cut taxation by 59 per cent to deal with the hard economic times.

“The hardship has brought the culture of handouts,” argued Kalonzo.

The former VP, who said the next government will be formed by a coalition, hit out at Ruto for channeling money to amorphous organisations rather than channeling it to known groups.

Wetang’ula said: “We want to guard our borders, unite with fellow leaders and promote unity.

“Charity begins at home. Our Luhya unity must be seen so that we command respect on the national platform else people will dispose us.”

He encouraged leaders and voters in Western to welcome all national leaders so that they in turn are welcome in other parts of the country and asked grassroots leaders to up their game at vote hunting.

Lugari MP Ayub Savula challenged the OKA principals to get out of the boardrooms and engage the people as they prepare for the polls.

“We thank Western Kenya for welcoming OKA,” said Savula at a meeting bringing together delegates from the four parties held at Kakamega Golf Hotel.

“I believe we will do better to go out frequently to meet the voters and sell our agenda.”

Lurambi MP Titus Khamala, in whose constituency the OKA meeting was held, said the tour will galvanise Western region.

“I am happy that key Luhya politicians, namely Wetang’ula, Cyrus Jirongo and Mudavadi have come together,” he said.

Kakamega Senator Cleophas Malala said the OKA has started the journey for one of the principals to succeed President Uhuru Kenyatta next year.

Malala said the coalition spent a lot of time planning how they will form the next government and has a good campaign strategy that will shake Kenya.

“We have been accused of taking time in boardrooms instead of campaigning.

“Now we want our critics to know that we are now ready and we have put in place a campaign masterpiece that will shake the entire country,” Malala said.

Baringo  Woman Representative Gladwell Cheruiyot said: “It doesn’t matter how strong you are if you go it all alone against a team of say three strong people they will ground you.”

Kitui Senator Enoch Wambua said OKA was too big to have a single bedroom in one particular region, and suggested that the alliance ought to expand its wings allover Kenya.

Each of the groups received between Sh1.5 million and Sh2 million to modernise their table banking projects. 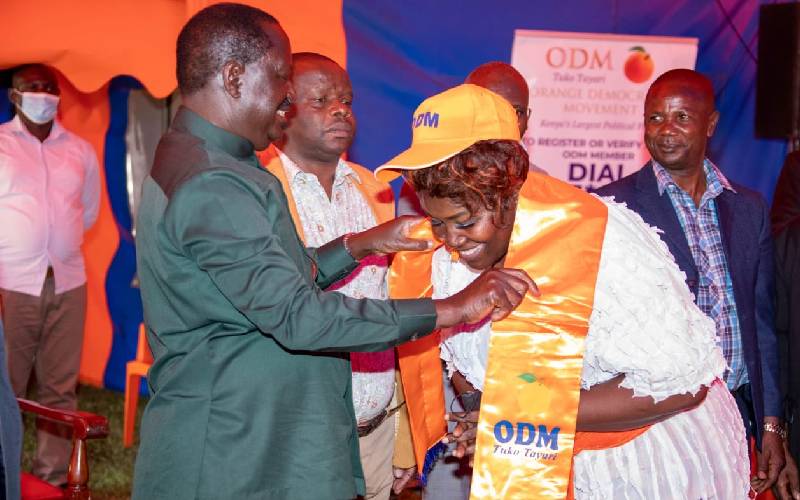